After beginning with the Kona, the Korean carmaker is looking at taking on the affordable segment with an India-specific EV. 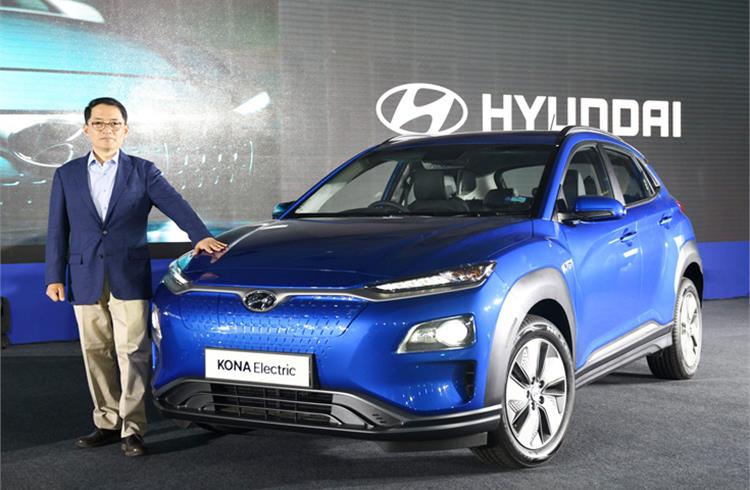 Launched at Rs 2,530,000 ex-showroom (India), the Hyundai Kona is the first electric model from the stables of the Korean carmaker to be launched in India, right after the announcement of a healthy dose of sops for electric vehicles (EVs) in the Union Budget of 2019. But, at that price, "it's a very niche segment that the car is going to cater to", according to SS Kim, MD and CEO, Hyundai Motor India.

To keep costs in check, Hyundai is locally sourcing the seats on the Kona and making the injection moulded bumpers in India, but everything else is being sourced part-by-part from Korea and being assembled at its plant in Chennai.

While a high localisation level is only possible with more volumes, the company says that it is targeting more numbers with a 'mass-market' product in the pipeline for the Indian market and localisation will play a key role.

The company will then look to invest into a local battery manufacturing facility in the country and significantly enhance localisation to realise affordable pricing on its e-models.

"When we introduce our mass-market EV in India, it will be based on the localisation of the battery. So our long-term roadmap is to invest in a battery manufacturing plant in the country," Kim told Autocar Professional on the sidelines of the Kona launch in New Delhi.

Small EV for India in the product pipeline
A part of Hyundai's global plans to introduce 25 EVs by 2025, the Indian 'small EV' is being developed specifically for India in collaboration with the Indian and Korean R&D centres, sources tell us. "We aim to bring quite a few of those 25 models to India," Kim said.

Hyundai has invested US$ 400 million (Rs 2,750 crore) in the development of the Kona Electric and Hyundai India has infused additional money to locally assemble the crossover in India.

While the Kona will initially be launched only in 11 cities including the top four metros – Delhi, Mumbai, Bangalore and Chennai – the car will be retailed only at a select 15 showrooms. The company will assess demand and gradually expand the Kona's sales in other cities in the country.

Piloting fuel cells in 2021
While electrics could be the buzz word in the automotive sphere, experts and specialists are not ruling out the potential and viability of fuel cell technology either.

According to technology major Continental, by 2030,  fuel cells will be on par with electrics in terms of cost and it will become the most suitable technology for long-distance traveling and for premium vehicles.

Being a global giant, Hyundai too is not giving up on the possibilities of the technology yet and today said that its Indian arm is considering starting a pilot project in India in 2021, wherein it will set up Hydrogen dispensing stations at multiple locations and run a pilot on its Nexo FCV to gather data and do a feasibility study.