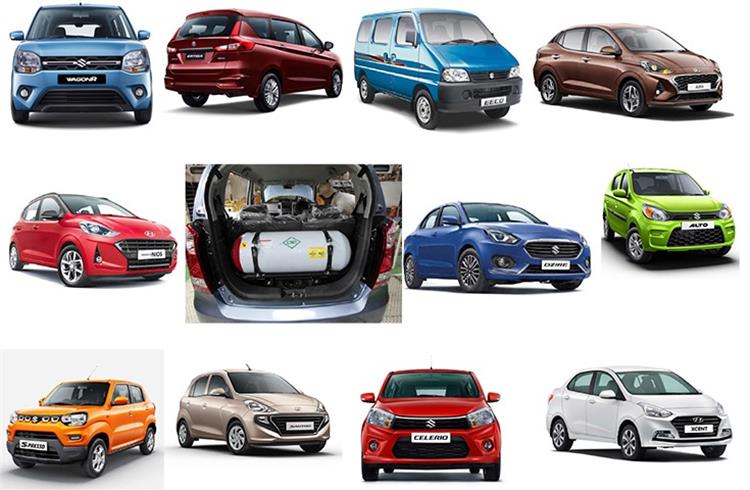 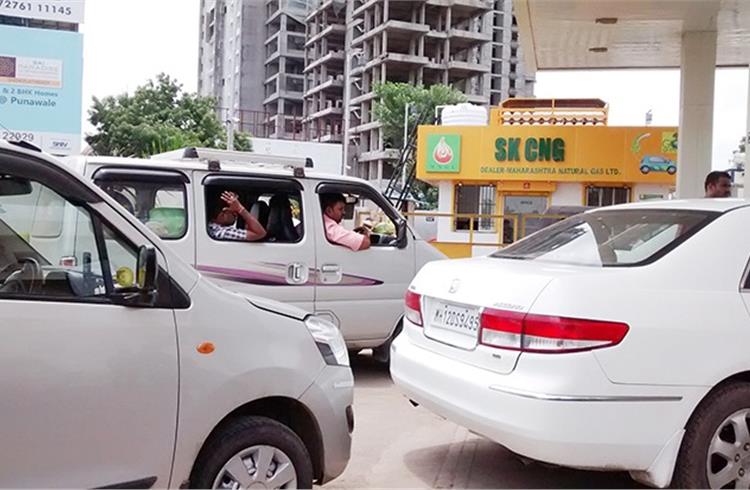 At Rs 57.54 a kg in Mumbai, CNG far cheaper than petrol (Rs 110.85 a litre) and diesel (Rs 96.62). Challenges include longer refuelling time due to a fewer number of CNG stations. But it makes wallet sense for those who have heavy day-to-day usage. 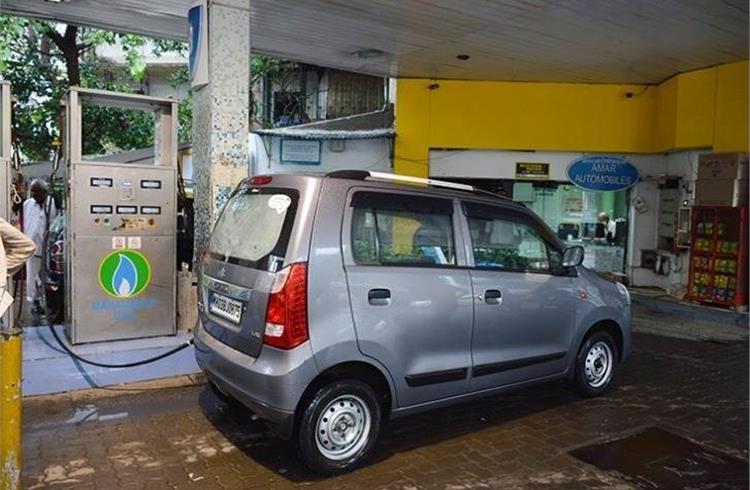 Even as petrol and diesel retail price has fallen since November 4 due to the Central government cutting its excise duty by Rs 5 and Rs 10 a litre respectively, the market is seeing growing demand for CNG-powered cars. In the first half of FY2022 (April-September 2021), industry data reveals that a total of 101,412 CNG cars were sold in India, which constitutes robust 97% year-on-year growth (April-September 2020:  51,448 units).

Wallet- and eco-friendly fuel
From a consumer’s point of view, other than the environment-friendliness of CNG, a CNG-powered  car provides considerable savings compared to its petrol or diesel-engined siblings. What’s also driving the consumer shift to CNG models is the high price of petrol (Rs 110.85 a litre in Mumbai) and diesel (Rs 96.62 a litre in Mumbai on Novembre 5). CNG in Mumbai costs Rs 57.54 per kg.

Running costs are also significantly lower compared to either of the fossil fuels as a vehicle inherently gives better fuel economy when driven on CNG. A few challenges remain though. Refuelling takes longer due to a fewer number of CNG stations and highway driving requires additional planning in terms of trying to take a route with a CNG station. But car buyers, who have heavy day-to-day, usage are finding that it makes wallet sense in choosing the CNG fuel option. 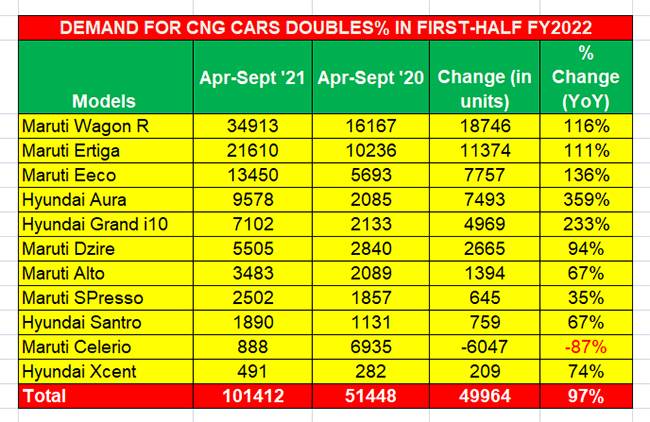 The other CNG player, Hyundai Motor India, with 4 models – Grand 10, Santro, Aura and Xcent – sold the remaining 19,061 units. Not surprisingly, with growing demand for CNG models in a time of sky-high petrol and diesel prices, both carmakers have posted strong YoY growth. While Maruti Suzuki had notched 80% YoY growth (H1 FY2021: 45,817 units), Hyundai Motor India has done even better – 238% YoY growth (H1 FY2022: 5,631 units), albeit on a lower year-ago base than the overall PV market leader.

Maruti Wagon R: India’s best-selling CNG model by far
With 82,351 units at half-way stage, Maruti Suzuki is well set to drive past its FY2021 sales of 157,954 units – its best CNG annual tally yet –which accounted for 12% of its total PV sales of 12,93,840 units. And the Wagon R CNG was the biggest contributor to CNG model sales with 60,222 units or 38 percent of the carmaker’s total CNG sales last fiscal. 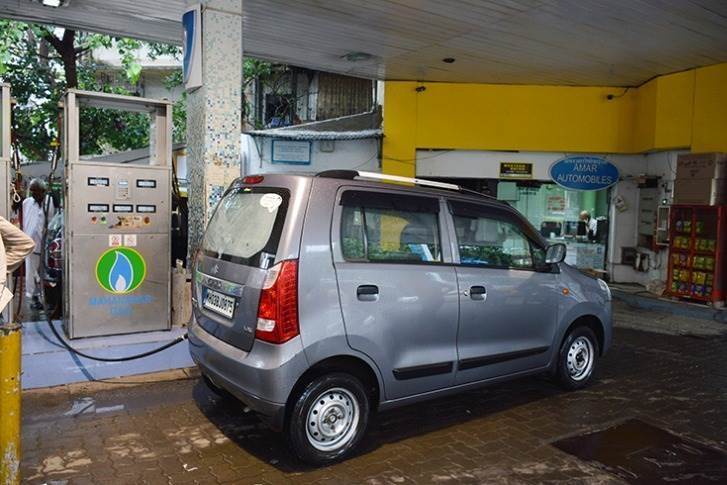 All Maruti CNG models other than the Celerio have notched smart YoY growth. The Ertiga, with 21,610 units to its credit in H1 FY2022, has clocked 111% growth while the Eeco van, with 13,450 units and 136% YoY growth is India’s best-selling CNG passenger vehicle.

Hyundai makes smart gains too
Meanwhile, Hyundai Motor India is also seeing strong demand come its way. Its Aura CNG sedan, with 9,578 units sold in first-half FY2022, has registered 359% YoY growth indicating robust consumer interest in the eco-friendly model. Sibling Grand i10 is not very far behind – with 7,102 units, this hatchback posted 233% growth even as the Santro (1,890 units) and Xcent (491) saw improved demand.

Tata Motors getting ready to enter CNG market
Tata Motors, which is on a roll in the PV segment with a strong showing month after month,  doesn’t have a CNG vehicle in its portfolio yet. But its entry into the CNG segment is imminent.  In early August, at a press conference in Chennai, at the launch of the new Tiago NRG hatchback,  Mohan Savarkar, Vice-President, Product Line Head, PVBU, Tata Motors, had said, “CNG is the way to go for smaller cars. Soon, you will see CNGs coming in our portfolio too. Whether we can use it in all our products or only specific models is something we have to wait and decide when the product hits the market. But, CNG is coming.”

The Tiago CNG and Tigor CNG models have been spotted testing on multiple occasions and according to Autocar India the two cars are slated to be launched later this year. Also, with fleet operators taking to CNG and electric in a big way, it is likely that a Tata CNG model may debut under the ‘Xpres’ brand.