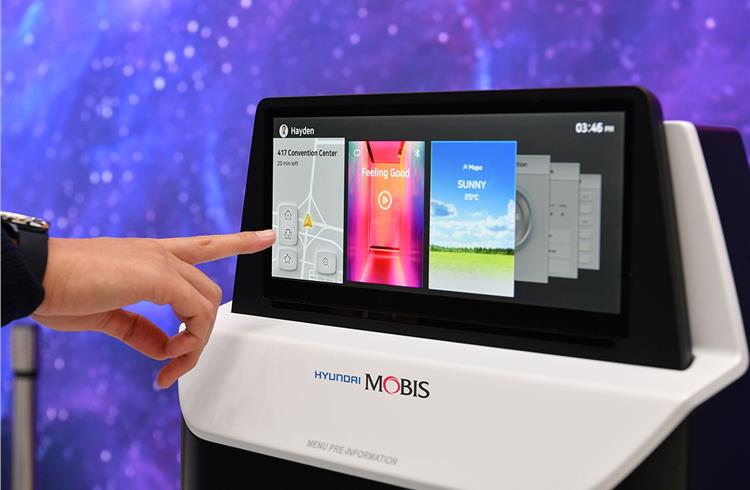 Hyundai Mobis has announced development of a new technology that allows a user to open frequently-used menus just by moving the hand near the automotive displays and to select a menu with a gesture and a tap. This is expected to minimise manipulations and facilitate safe driving by preventing gaze dispersion, enabling more convenient use of in-vehicle infotainment (IVI) system.

Quick Menu Selection automatically opens pop-up menus that are often used when a user’s hands are in close proximity to the screen. By bringing the hand close to the screen, it activates the proximity sensor that is integrated with the display. Users can also use a simple swipe gesture to access the desired menu.

Hyundai Mobis states it developed these technologies to enhance convenience and safety of driving. This is the first use case in the world to deploy infrared ray (IR) sensors, which have been widely used in a variety of products, into in-vehicle position sensing.

Hyundai Mobis Quick Menu Selection uses time difference light sensing technology to minimise the number of sensors required, and applies automatic calibration (monitor calibration) technology based on a detection algorithm that improves accuracy in the detection of hand gestures and the direction of movement. To make it more intuitive and easier for users, Quick Menu Selection is also combined with responsive UX and UI solutions, which detect the distance and position of objects.

Based on the improved gesture system, Quick Menu Selection significantly simplifies the vexing manipulation process of having to tap on touchscreens multiple times. Whereas before, touchscreen displays were unable to sense the user’s intention before the user tapped on the desired menu, Quick Menu Selection allows for the application of interfaces for various user scenarios depending on the direction of movement and hand position.

According to Hyundai Mobis, it “is working hard to deliver an infotainment portfolio that can be used in numerous ways in vehicles, with Quick Menu Selection being developed as an extension of the endeavour.”

The company is converging diverse interface and design element technologies and applying them in automotive interior and exterior components for expanded applications. Building on its exceptional software technology that is capable of responding flexibly to different market demands, Hyundai Mobis has secured efficient, stable hardware capabilities that give the company a competitive advantage in the IVI system over competition.

Last month, Hyundai Mobis introduced the next-generation IVI platform in collaboration with Luxoft, a multinational software company, at the International Suppliers Fair (IZB) hosted by Volkswagen. The Mobis Infotainment System (MIS), co-developed by the two companies, is a future platform that controls six screens comprised of a digital cluster, AR-HUD, the central stack display (CSD), and three passenger displays. MIS was designed to provide user-friendly services, such as a virtual assistant and personalized content based on AI.

Going forward, Hyundai Mobis plans to internalise and advance its R&D technologies, while expanding software partnerships with global automakers to reinforce its competitiveness.