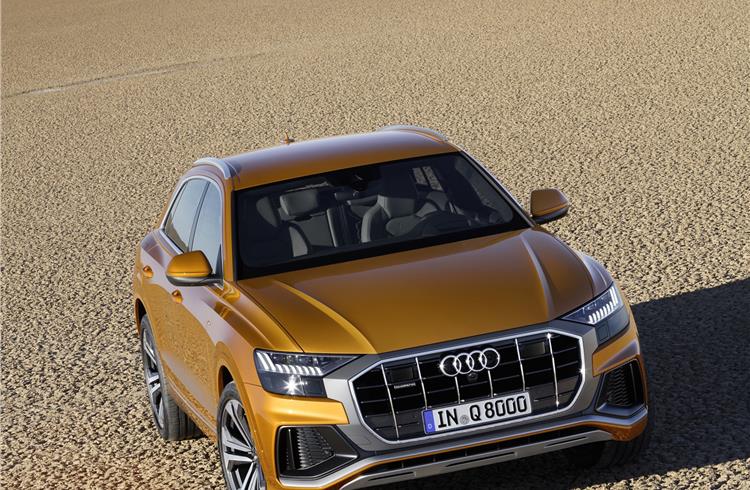 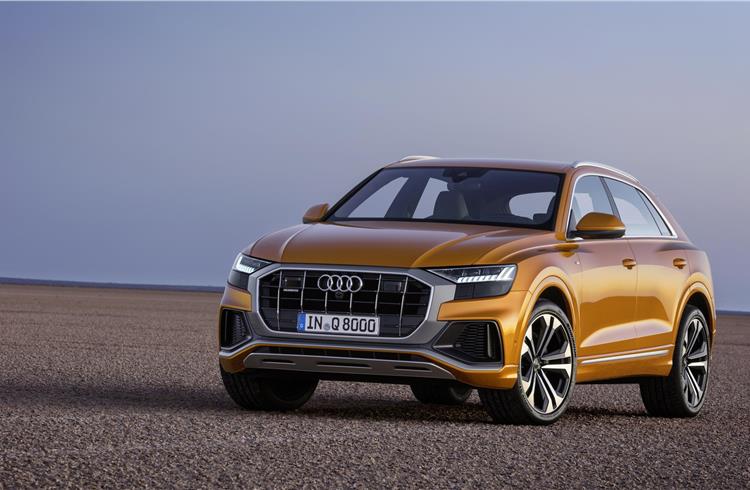 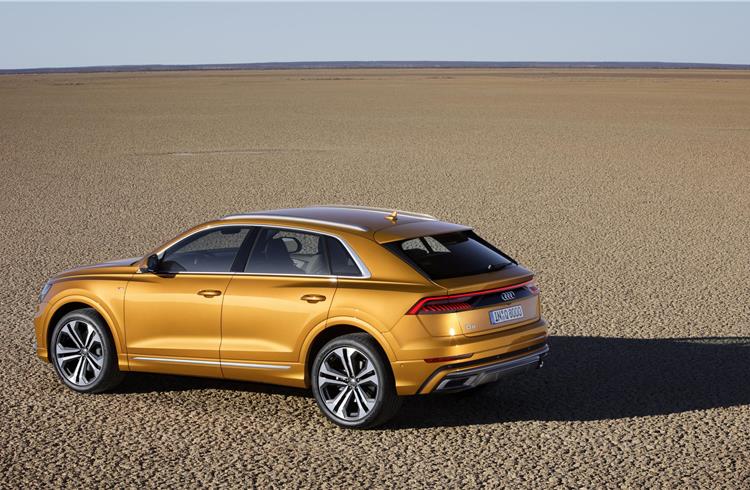 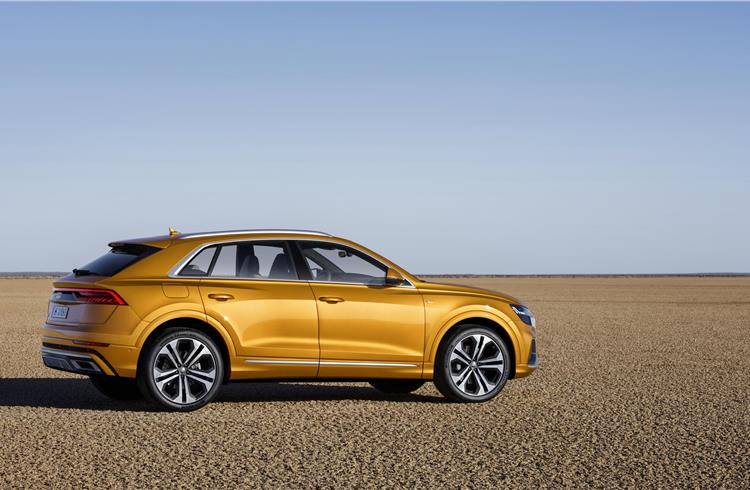 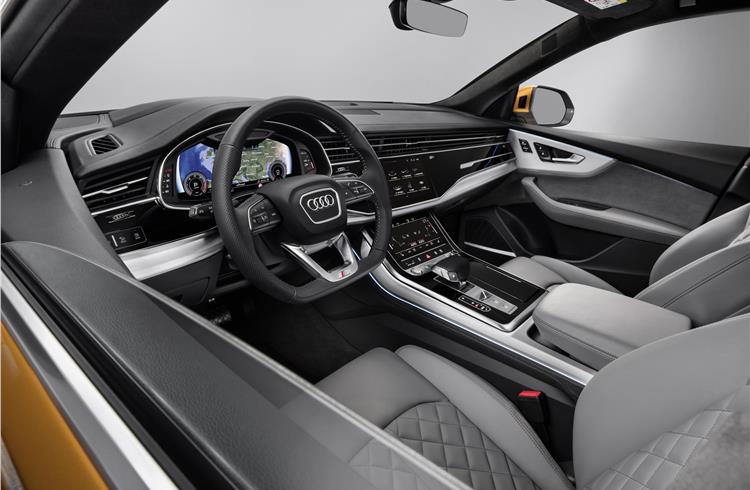 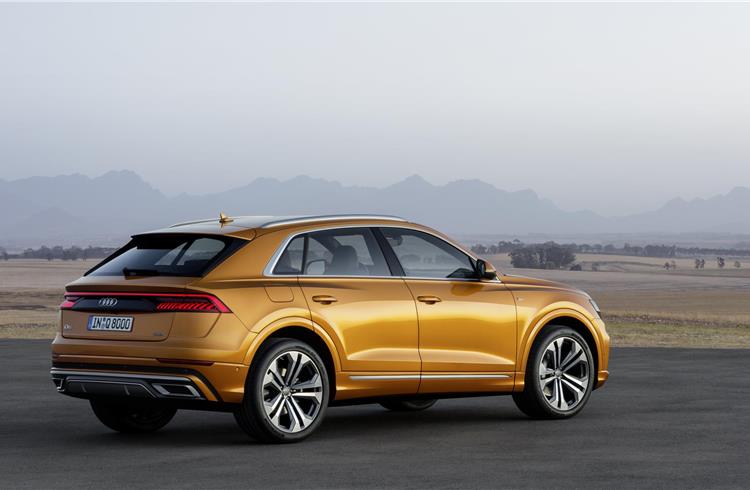 The new Audi Q8 has been officially unveiled. Powered by a choice of 3.0-litre petrol and diesel engines, the new Audi SUV is set to go head to head with the Range Rover Sport and also German premium rivals including the BMW X6 and Mercedes-Benz GLE Coupé.

The Q8 features a strikingly coupé-like roofline and frameless doors. Notable styling flourishes include the new-style upright grille design, which features six vertical chrome fins, bulging wheel arches inspired by the design of the famous Quattro (and which are now a design feature on all new Audis including the Audi A6, A7 and A8) and the option of 22-inch wheels, the largest ever to be offered straight out of the factory. Technical design flourishes include a full-width light across the rear. It incorporates a new LED arrangement that projects a striking 3D shape and emphasises the car’s width.

Although the Q8 is shorter than the Q7 on which it is based, this is entirely down to the smaller overhangs at the front and rear of the car. As such, interior space is nearly identical, although the Q8 has a strict five-seat layout, whereas the Q7 can be had with seven. The Q8 is 130mm longer than the Range Rover Sport, as well as being 100mm lower and 10mm wider. The Audi’s wheelbase is also 70mm longer, underlining the additional interior space that it offers. Boot space is 650 litres with the seats up and 1,755 litres with them down, compared with the Q7’s 770/1,955 litres. While the roofline is 40mm lower than that of the Q7 at its highest point (above the front doors), the slope is achieved in part by design sleight, particularly with the use of the dropping roof spoiler. As a result, space at the rear seems to be sufficient even for tall adults.

The Q8 is also 27mm wider than the Q7, a result of engineers seeking ways to make the car more stable and agile. Aluminium has also been extensively used on the retuned five-link front and rear suspension, in order to save weight, although the car’s total weight is yet to verified.

As standard, the car has seven selectable driving modes that alter the settings for the suspension, steering and engine, ranging from off- road modes to more sporting setups. The Q8 can also be specified with one of three different types of suspension, two of which employ air springs to improve comfort.

Inside, the influence of the new A8, which was revealed last year, is evident, most notably with the new control system for the major functions, which are spread across two large touchscreens. The upper 10.1-inch screen controls the infotainment and navigation functions, while the lower 8.1-inch screen controls the heating, ventilation and air conditioning systems. While these allow the dashboard to have very few buttons on it and give the interior a minimalist look, in the A8 the system has drawn some criticism for its usability.

Similarly, the interior finish and choice of electronic driver aids are reminiscent of those found on Audi’s range-topping sedan. While treatments vary according to the trim level, there is abundant use of leather and chrome. Buyers can choose from numerous enhancements, including four types of leather, three types of seat design and a choice of sound systems that is crowned by a 23-speaker Bang & Olufsen setup.

Buyers can opt from four driver assistance packages, which range from a low-speed system that autonomously drives the car in a line of traffic, to a system that warns of potential impacts and can contact the emergency services if it detects an accident. In total, there are 39 driver assistance systems available.

Initially, the Q8 will be available with a choice of two 3.0-litre engines: a 340hp petrol in the 55 TFSI and a 286hp diesel in the 50 TDI. The only performance figures released so far are that the diesel can accelerate the Q8 to 100kph from rest in 6.3sec, has a 230kph top speed and 600Nm of torque. The petrol will feature an eight-speed gearbox, with a seven-speed S tronic unit for the diesel.

A less-powerful 230hp 3.0-litre diesel V6 – the 45 TDI – will be offered several months after launch, once the initial rush in demand for the car has slowed.

All three engines employ fuel-saving 48V electrical technology, as pioneered on the SQ7. No other performance or economy figures have yet been released. However, it is already anticipated that hotter versions of the Q8 will be produced, potentially including a next-generation SQ8 that could be offered with a petrol-electric hybrid powertrain.

The Q8 was tested rigorously across various terrains and was also spotted on Indian soil a few months ago.