The group has outlined a plan that includes portfolio expansion, retail explosion and aggressive focus on exports to achieve this ambitious target, says Amit Panday. 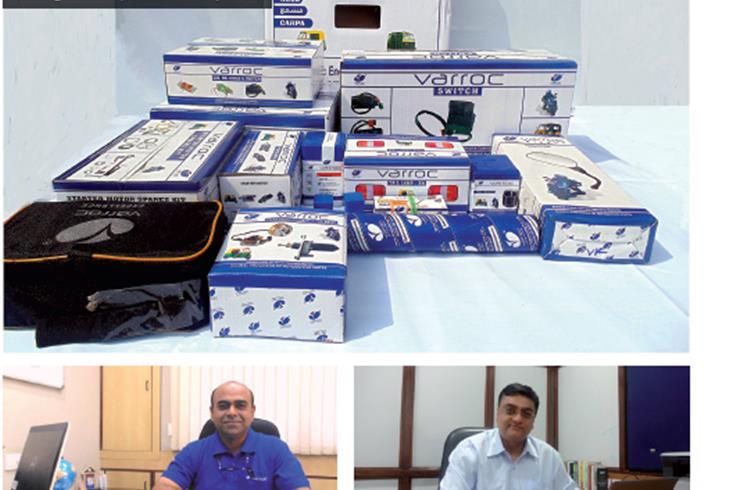 As the market witnesses the continuing slowdown, select OEMs and component suppliers are setting their eyes on non-cyclical revenue areas with more focus. The Indian automotive component aftermarket is one such promising bet which has solid statistics to its support. With a current estimated market size of around Rs 28,000 crore, the component aftermarket is pegged to touch Rs 37,000 crore by 2014-15, which translates into a growth rate of nearly 32 percent.

The Aurangabad-based Varroc Group is one example among several established players who are keen on tapping the unorganised market in this segment. With a strategy in place, the manufacturer has laid out its plan up to year 2020 by when it aims to achieve a turnover of Rs 1,000 crore from its aftermarket division (AMD). The company is focussing on widening its product portfolio in this segment, enhancing its distribution network and expanding its sales team to materialise its growth plans.

Amit Dakshini, chief strategy officer, Varroc Group, told Autocar Professional, “The aftermarket business is large in India and growing. Our aftermarket division was re-structured as a separate business in 2009. Our vision is to achieve a turnover of Rs 1,000 crore by 2020.”

Meanwhile, Tarun Tyagi, head, aftermarket division, Varroc Group disclosed, “The business has been growing at 25 percent year-on-year basis and is expected to cross a turnover of Rs 100 crore by the end of the current fiscal. We're confident that with our aggressive product portfolio and the support of our channel partners we would be able to achieve our vision.”

Continuing to grow its market share in the aftermarket segment and to support its ambitious vision, Varroc’s aftermarket division has also laid out a clear strategy for its retail expansion across the country. While the company operates through a strong pan-India network of 5,000 retail counters and 300 channel partners, it also has an export network of 30 importers in 20 countries particularly in this segment. “The division intends to further add another 100 channel partners and another 5,000 retail outlets over the next three years,” added Tyagi.

The Indian automotive aftermarket segment is currently dominated by the two-wheelers, thanks to the low cost of ownership and its penetration. According to various market estimates, two-wheelers account for around 50 percent of the aftermarket while the rest is almost equally divided between commercial vehicles and passenger vehicles. For a business firm looking to grow such as Varroc, this is an ideal setup it can ask for as the company has been operating in the two-wheeler domain for a longer time than in passenger cars and commercial vehicles.

Additionally, the presence in the two-wheeler segment is also helping Varroc penetrate deeper into rural India. “The two-wheeler segment has a significant market in semi-urban and rural areas and, therefore, our network has also grown naturally in class C and class D towns,” said Dakshini.

For Varroc’s aftermarket division, the northern, western and southern markets are equally important. While the contribution to annual sales from north, west and south is around 30 percent each, eastern markets account for 10 percent. Nevertheless, covering the entire Indian landmass is not easy. Agreeing to the challenge, Dakshini explained, “The key challenge for any retail business is to build profitable channel network, efficient logistics, and lean supply chain. To address these challenges, Varroc’s aftermarket division is focussing on carefully building a network of trustworthy, financially stable and reliable partners. Varroc is also focusing on investing in information technology to build the right infrastructure to provide efficient, just-in-time deliveries while maintaining optimal inventories across the entire supply chain.”

While the company sells CDI systems (capacitor discharge ignition systems), regulator rectifier, starter motor, mirrors and engine valves in the aftermarket, it has also added some new products to its portfolio such as coils, filters, relays and headlights of passenger cars.

It is to be noted that Varroc is also present in some of the prominent international aftermarkets as well. Bullish about aftermarket exports, Tyagi concluded that “Varroc has gradually built a strong presence in the export market which currently contributes to approximately 25 percent of the aftermarket division’s total revenues. Going forward, we foresee exports contributing significantly towards the growth of the AMD business.”