Toyota Kirloskar Motor, which launched the Hyryder five months ago, is witnessing strong acceptance with almost 80% of the midsize SUV's bookings for hybrid variants. 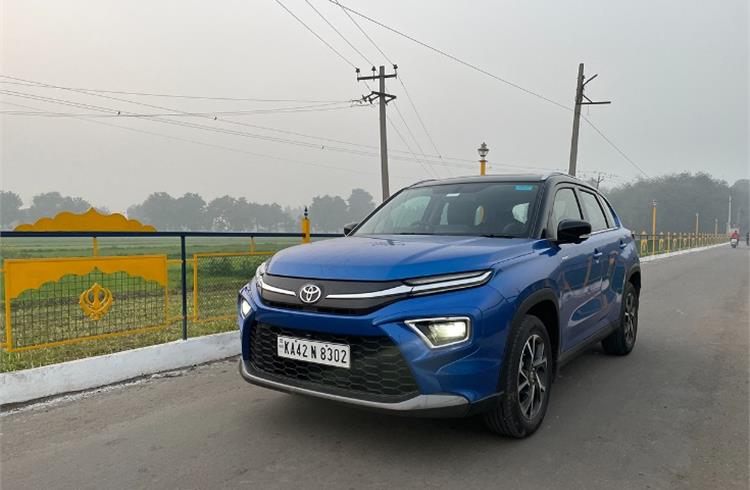 Large dimensions on the outside liberate generous room inside the cabin, barring the boot space which is compromised due to Li-ion battery placement. 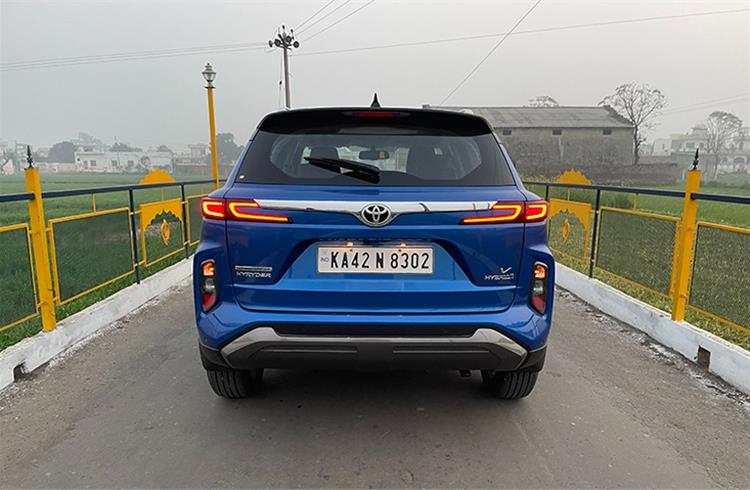 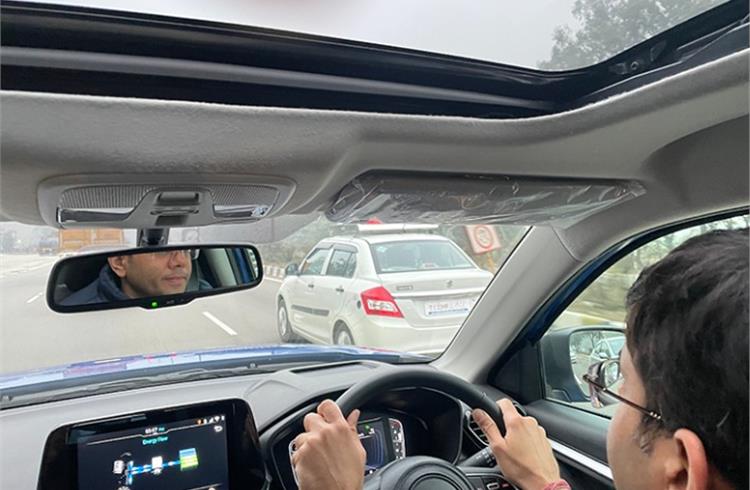 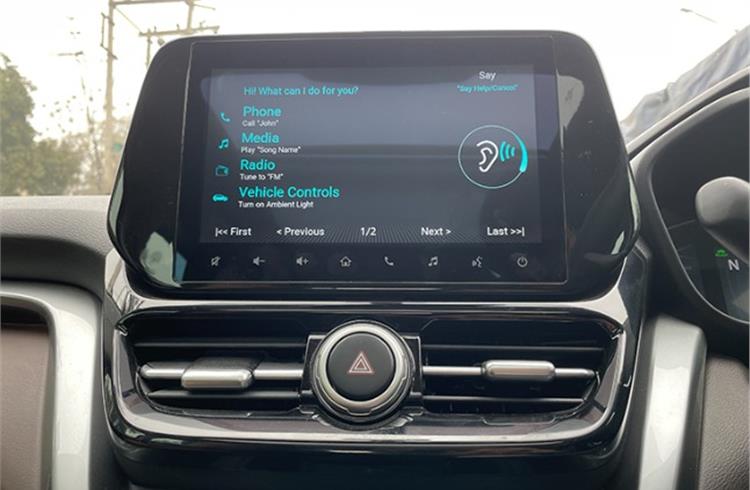 Nine-inch infotainment unit with connected car technology often activates voice assistant without 'Hey Toyota' command being called upon to do so. 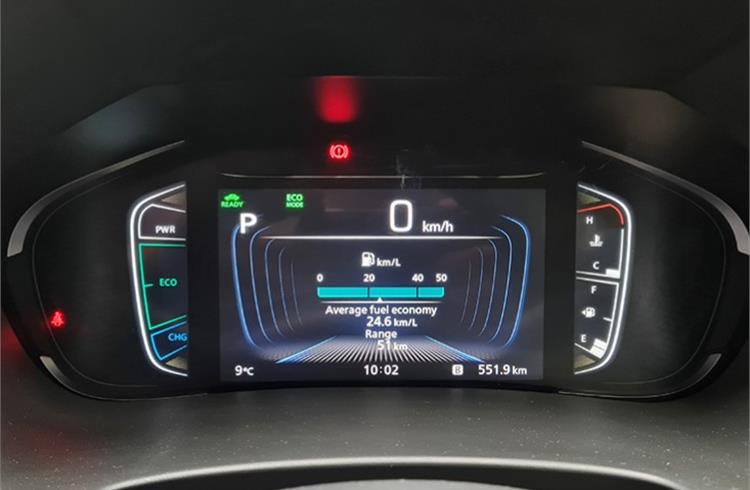 Hyryder scores high on efficiency with up to 40% of total distance or 60% of driving time done in EV mode.

Between July and December 2022, the Hyryder has sold a total of 11,864 units. The company states that it is witnessing strong demand for the hybrid powertrain in its new midsize SUV and almost 80% of the Hyryder's bookings are inclined towards the hybrid variants, with customers increasingly acknowledging the benefits of the technology and embracing it.

"We strongly believe that powertrain technologies should be based on a country's fuel mix and our endeavour is to adopt a multi-path approach," Atul Sood, vice-president, Sales and Strategic Marketing, TKM, told Autocar Professional in a recent interview.

Toyota's hybrid system has been fairly localised in India with the Japanese carmaker betting big on the capabilities of domestic component suppliers to localise the technology in the Hyryder. While the engine in the SUV is being fully manufactured in India, TKM has localised the e-transaxle by up to 70%, with the lithium-ion battery pack being the sole component to remain imported, and will also be localised in a gradual manner in the future. 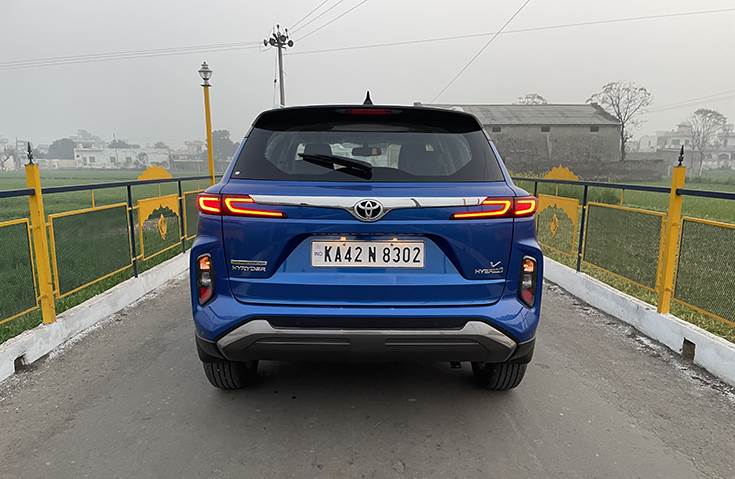 Greener alternative to diesel, CNG
On a recent drive from Delhi to Amritsar, the Toyota Urban Cruiser Hyryder delivered a robust fuel economy of 24.6kpl, enabling this reporter's 1,100km journey on a single tank of fuel, without any need to visit a petrol station to fill fuel in the SUV’s 45-litre tank. The crossover mimicked a feat which would only have once been possible only with a diesel-engined car.

Diesel cars, however, are a dying breed in India with only a handful of passenger vehicle OEMs now offering a diesel engine option in their vehicle portfolios. India’s tightening emission standards, which are set to switch to the more stringent RDE (real driving emissions) norms in April 2023, will further enlarge the void for clean, fuel-efficient diesel cars in the market.

Although OEMs, including Toyota, are offering the choice of CNG to high-mileage customers, it is not a definite substitute to the practicality, range and fuss-free driving experience of a diesel car. The biggest compromise with CNG-equipped cars is the lack of reasonable space in the boot which houses the gas cylinder, followed by the limited range on every tankful and the hassle of planning one's route according to the location of CNG stations along the way. While the government is making significant advances in the speedy expansion of the CNG network in the country, refueling can still be a cumbersome affair with long queues, low pressures and the mandatory safety precaution of all vehicle occupants having to alight during the refill.

It is here when hybrid cars make perfect wallet – and eco-friendly – sense for a cost-conscious country like India which is in the nascent stages of EV adoption and, given its wide and varying geography, simply cannot rely on just one single technology as a mobility solution.

Toyota's well-established hybrid technology that has existed for a quarter of a century and sold over 2 crore units in 140 countries aims to be the bridge between combustion engines and pure EVs. In the Urban Cruiser Hyryder, the hybrid system pairs a 1.5-litre, Atkinson cycle, three-cylinder petrol engine to a 177.6V, 0.76kWh quick-discharging, power cell lithium-ion battery pack that can drive the front wheels through an 80hp electric motor. The combined system output, however, is pegged at 115hp.

Driving characteristics
A long 1,100km journey was more than sufficient to ascertain the nuances of the hybrid system and understand how the technology works. In the Toyota Hyryder, it functions seamlessly to offer the best of both worlds – solid driving characteristics as well as efficiency – making the hybrid powertrain a worthy contender for a varied mix of city and highway driving applications.

The system starts off in 'EV mode' with the SUV waking up with no sound from the engine bay and ambling along at initial speeds on battery power unless the charge is completely depleted or there is demand for more power from the driver, in which case the combustion engine takes over to drive the front wheels and simultaneously charge the battery. 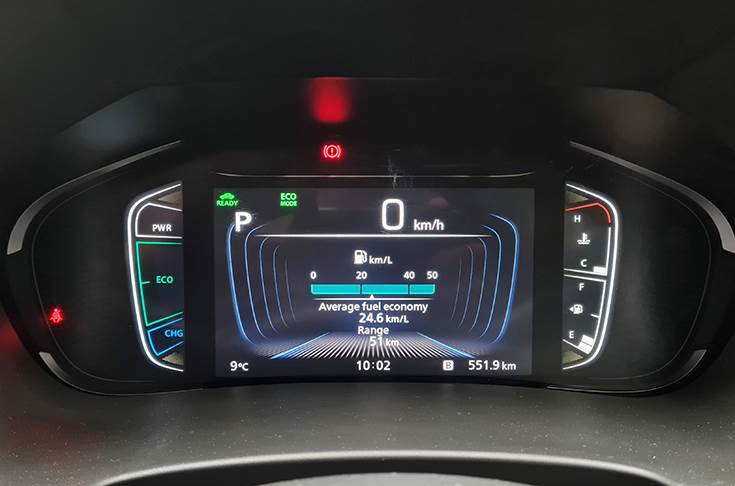 Hyryder scores high on the efficiency front with up to 40% of total distance or 60% of driving time done in EV mode.

While city driving conditions gave ample opportunity for the Hyryder to run in EV mode due to frequent instances of braking recharging the battery, highway driving sees the system automatically switch over to battery power under various circumstances. For instance, after reaching a certain cruising speed or while coasting, the engine will ‘handover’ to the e-drive system that would run for a few kilometres before kicking in again to recharge the battery. Downhill driving too triggers the EV mode in full with regenerative power from the wheels now charging the battery to increase the state of charge and consuming energy only if there is an accelerator input from the driver.

The intermittent kicking in of the battery system and the toggle between the combustion engine and e-motor works seamlessly, albeit the minor vibrations and engine noise being the only tell-tale signs determining the nature of power being consumed.

The hybrid system surprises with its fuel savings and makes the Urban Cruiser Hyryder one of the most fuel-efficient cars available in India today with a claimed figure of 27.97kpl. It also establishes a technology that is able to minimise losses in a pure internal-combustion engine powertrain by its electrification to leverage benefits such as brake-energy recuperation and turning off the engine while idling excessively.

Few compromises
Despite all its merits on the front of driving dynamics and the flexible nature of its powertrain, the Urban Cruiser Hyryder has to make compromises too. The lithium-ion battery pack which is stowed away in the boot reduces the luggage capacity significantly to 265 litres, compared to the 373 litres offered in the non-hybrid variants, making it insufficient for an entire family's luggage on long journeys. However, the available space is still much more practical than a CNG-equipped car.

Furthermore, the connected-car feature suite, which wakes up to the 'Hey Toyota' summon voice command, is often triggered accidently without the words being said. The wireless phone charger ahead of the gear selector is also unable to hold the phone in its position, often leading to interruption in the charging process.

These though are minor hiccups in the journey to cleaner mobility. As the automotive industry transitions to zero-tailpipe emission vehicles, TKM is betting big on hybrids as a stepping stone towards full electrification before the country strengthens its infrastructure for EVs. But unlike EVs, hybrids in India are currently being taxed at par with their internal-combustion engine counterparts, leaving buyers in a deep

"Since infrastructure is presently a challenge, we have started our electrification journey in India by introducing our heavily-localised strong-hybrid powertrain."

"Hybrid technology will help in the mass electrification of the country, and strong-hybrid powertrains are going to be enablers in this drive. While countries that offer incentives to hybrids have witnessed an acceleration towards carbon neutrality, we are approaching the government for tax incentives on hybrids, but since it's a policy matter, we do not know what the outcome will be," Raju B Ketkale, EVP, Function Head, Manufacturing, TKM told Autocar Professional.