The India-market Duster comes with a host of features and styling cues. It also gets active and passive safety features like dual airbags for driver and passenger, ABS, EBD with Brake Assist and a monocoque body with side-impact beams. 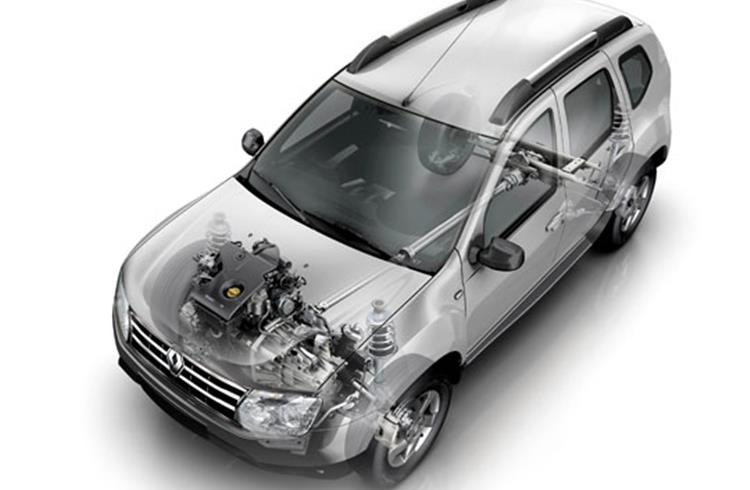 Despite its late entry into the Indian market, French carmaker Renault has reiterated its seriousness to grow in India with the launch of its fourth product, the two-wheel-drive Duster SUV. The Duster bears competitive pricing at Rs 7.19 lakh for the base petrol version and Rs 11.29 lakh for the top-end diesel offering (both prices, ex-showroom New Delhi). Marc Nassif, managing director, Renault India, says that the four-wheel-drive Duster will be introduced later as demand and volumes pick up.

Meanwhile, exports of the right-hand-drive 4WD Duster are slated to kick off to the UK from the Renault-Nissan Alliance manufacturing facility at Oragadam, near Chennai, by the year end. To be exported under the Dacia brand, the Duster will be priced differently as well as have different specifications for the UK market. Subsequently, the Duster will be exported to other right-hand-drive countries as well.

The India-market Duster comes with a host of features and styling cues. It also gets active and passive safety features like dual airbags for driver and passenger, ABS, EBD with Brake Assist and a monocoque body with side-impact beams.

Interestingly, Renault has different marketing strategies for its global markets; in India it is keen to make headway with its Renault brand though the Duster belongs to the same Dacia and Renault platform.

Along with Nissan, Renault has mustered up a production capacity of 400,000 units per annum at Oragadam and Nassif says that the plant is currently working three shifts. One production line is close to producing 200,000 units annually while the second production line has been added in March this year. However, he adds that initial production targets for the Duster will be dictated by market demand as will further ramp-up of capacity.

Though the Duster comes with a manual transmission, the availability of an automatic transmission later is not being ruled out, depending on demand. While the Duster makes its debut in India with 60 percent localisation content including the K9K diesel engine, the petrol engine is being sourced from Renault’s European plants. Further localisation of the Duster to 80 percent is on the cards within 12 months.

The Duster had already received 4,000 bookings prior to its official launch, according to Len Curran, vice-president, sales and marketing, Renault India, and within five days of the launch is believed to have notched bookings of over 6,000 units.

A game-changer for Renault in India?

The Duster, with its competitive pricing strategy, is being projected as a game-changer for Renault in India. The SUV rides on the USP of fuel efficiency of a premium hatchback, the comfort and manoeuvrability of a saloon, and the roominess of an SUV.

As such, the Duster targets vehicles across a wide gamut of segments such as SUVs (Mahindra Scorpio), premium hatchbacks (Maruti Swift, Hyundai i20) and saloons (Hyundai Verna, VW Vento) and will be marketed in eight variants. These models are expected to be its biggest competitors although the company expects saloon buyers to gravitate towards the Duster due to its lower pricing and value propositions. In the near future, it will face new competition from the Ford EcoSport SUV and the Mahindra Mini-Xylo. Renault, which sold over 300,000 Dusters globally last year, sold 1,579 units of its three models in India – 489 Fluence saloons, 60 Koleos SUVs and 1,030 Pulse hatchbacks in April-May 2012. It is targeting sales of around 30,000 units from all its five models by this year end.

To drive customer satisfaction, the company is offering a ‘Renault Complete Care’ service package which includes a 2+2 years/80,000km warranty, labour-free service at 2,000, 10,000 and 20,000km with 24/7 roadside assistance through a dedicated call centre.

The Duster with its very competitive price is also seen as a make-or-break product for Renault in India. How did you manage to hit on such an attractive price and what are your expectations from this brand?

We announced our plans for five cars in India and are taking the top-down approach. We first showed what Renault is capable of — the brand. In 2011, we had the Fluence, the Koleos, and Formula 1 was the icing on the cake. It is not about flooding the market with ads and volumes.

So when buyers messaged you directly, what corrective measures did you take?

It is normal for buyers to write to us. We have a team in place which caters to them. Car manufacturers who say they don’t have any issues at all with their products are not telling the truth.

We have issues just like any other OEM but what we like to do is to see how fast we can solve the problem, thereby ensuring that there is a smile on the face of our customer even when his or her car is getting fixed in the workshop.

What kind of a customer base does Renault have in India?

It is around 6,000 now in numbers and we think it should multiply manyfold this year. First, because we have done more in two months — January and Febuary 2012 — than we did during June and December 2011.

What level of customisation did the Duster undergo for India?

Many levels. We have a rear AC unit just in India. It is not only a blower but a complete AC unit. It is the smallest unit available in any market worldwide. It has been designed and developed in Chennai for India.

In addition, the seats have been completely redesigned, so too the dashboard. We have customised completely. If you look at the Dacia version on the internet, you may not like to buy it, but you will buy this version in India. We will start exporting the car by the end of the year with the Dacia badge. The indigenisation in India was done by Indian engineers alone.

With this attractive price, will the Duster outsell the Pulse hatchback?

We feel that the Duster will sell in thousands, as compared to the Pulse which sells in hundreds. The Pulse will continue to do its job as there is room for everybody in the market. A customer, who buys a Pulse, might buy a Duster as a second car or he might switch.

Do you think the Pulse is not playing to its potential?

It was not our intention. We didn’t go into the lower segments of the diesel or go into the mass market of the petrol because what we offer in terms of brand and after-sales service is good. We have a four-year extended warranty in the entry-level variant too. We didn’t take off on the small car but did well and it was a part of our strategy.

2011 was the year to establish the Renault brand. How do you think this year will pan out as you are yet to launch the fifth car, a saloon?

It should be a year of expansion and expanding our brand awareness, which was still on at the end of last year, as you cannot build a brand in six months. It is a work in progress. It’s not only in big metros. We will be opening a showroom in Bhubaneswar. This is where Renault is going. So when we talk about 100 Renault outlets, it won’t just be at Mumbai or Delhi, but all over India.

Your fifth car will be important but at the same time isn’t a hatch below Pulse also important? How far are you in terms of developing that?

I cannot answer your question today but what I can say is Renault will go below. We will have a platform that will clearly go below where the Pulse is today.

As a global OEM, from the government policy point of view, increasing petrol prices are slowly moving the market towards diesel. Is that a concern for Renault? No. What is of concern to us is if the policies become unpredictable and inconsistent. If we change every month or every year, we are lost. We are investing heavily, and hence we cannot change on March 14 and guess what buyers will go for on March 16. If tomorrow we have to target 100 percent petrol in India, we can do it. It would take years though.

In Brazil, we do not have diesel passenger cars; it is 100 percent petrol. It is ethanol-blended there and we have the technology.

Does the current India environment give you the confidence to take such long-term decisions?

It is very difficult. We are not investing as we should because the visibility is not there. We really want a consistent approach. In Europe, in the past 10 years, we have had the same problem of a gap between petrol and diesel prices. The government then said that we have a plan; in the years to come, we will bring the prices on par. Now, we may have a 10-15 percent difference. As it was scheduled, we could plan accordingly. We could do a little bit of crystal-ball gazing and plan our strategy. In India, we don’t have the visibility and so we cannot do that.

What do you think about the industry’s move towards voluntary recalls?

For Renault, this is not an issue because we are in many markets where it is compulsory. Transparency and quality is in our DNA.

Is the Duster a car where there was maximum indigenisation among all your models, for India?

There are parts in the car like the seats and the dashboard, both of which are unique. You have many things. We changed the back protection; it's more plastic in Europe, while here we have a sturdier one. We conducted surveys and found out aspects that were nice to have, and we did push it a lot in terms of Indianising the car.

How many vendors participated in the Duster project?

So after that, will Renault be taking a small break?

After that, we have to digest and take the full benefit of the line-up. Name me someone who has launched five cars and opened 100 outlets in such a short span, with quality.

We launched the Fluence which had a great response, it was quite overwhelming. The diesel customers said they wanted the same features as in petrol. We launched a new version with those features in six months, instead of the earlier planned two years. Then we were told, “the drivability could be improved”. After that, we brought a new step for the K9K engine.