Carraro India, a subsidiary of the Italy-based 874 million euro auto ancillary maker, Carraro Group, is in a consolidation mode. 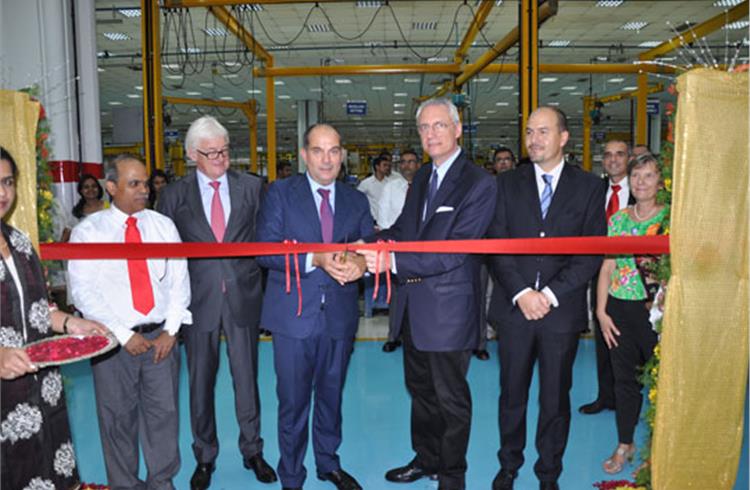 Carraro India, a subsidiary of the Italy-based 874 million euro auto ancillary maker, Carraro Group, is in a consolidation mode. Joining the glut of companies which are making India a major centre for their global operations, the Group inaugurated an all-new assembly line at its Ranjangaon facility on October 3 and has also given a substantial boost to its local R&D capabilities.

“Once again India has confirmed our most optimistic expectations," said Enrico Carraro, chairman of the Group. "When we started with Carraro India, in 1998, we had only sensed the potential of this area. Today, with over 1,100 employees and a constantly expanding customer base, it is a certainty. I am, therefore, very proud to open the new Carraro Technologies headquarters and the new Carraro India innovative transmissions assembly line”.

“Being able to rely on a solid R&D team in India means that we are able to conceive product solutions in tune with the needs of this geographical area. The start-up of production in India of the advanced T10 transmissions, intended both for the home market and for other similar markets, makes an important statement about the company’s strategy to offer its customers the best service, to create value and not merely to reduce costs,” added Carraro.

The new assembly line will roll out the newly developed transmission systems and axles (called T10 transaxles) for big 100-120hp tractors. While the new fully automated line can produce up to 5,000 units of T10s per annum, a larger number would be exported as India primarily remains a 55-90hp tractor market.

Interestingly, India is the only country where the Carraro Group manufactures its transmission systems for farm and construction equipment. Speaking to Autocar Professional, Alexander Bossard, CEO, CarraroSpA, said that, “We make 97 percent of all our transmissions in India.”

Fulvio Lo Conte, director, engineering and innovation drivelines, Carraro Drive Tech SpA, said that “the new T10 transmission systems would come with 12-speed (12 forward and 12 back) and 24-speed (24 forward and 24 back) versions. It is an innovative new family of products and we can add more gearshifts (say 48-speed) depending on applications. We plan to make mechanical T10s now and will make fully electronic T10s later.”

While officials claimed that the company has invested nearly one million euros (Rs 8.4 crore) in setting up the new T10-dedicated assembly line along with the test bench, Massimo Zanco, chief operating officer, Carraro India, highlighted that the latter (test bench) has been completely built in India.

The new line consists of a series of automated mobile stations and the process documentation is shared online on multiple screens. The end of line is equipped with the test bench which is fully automated by means of integrated robotics, for testing mechanical and electronic control functions. In other words, the test bench will be able to assess load capacities, simulate use of different gear shifts, activate brakes and differentials.

While the latest assembly line is eighth in order, the Ranjangaon facility houses seven other lines which annually roll out a total of 42,000 transaxles (transmission + axle systems) for tractors and 25,000 units of transmission systems for the construction equipment sector, primarily the backhoe loaders. Besides the T10 units, the company produces T3s (transaxles for 35-45hp small tractors) and the T5s (transaxles for the most selling general purpose 55-90hp tractors) at its facility.

According to our sources, Carraro India has recently supplied prototypes of T10 transmission systems to the Sonalika Group and Escorts Group in India and is yet to receive orders from them. On the export front, the firm has already shipped out some volumes of T10s to foreign players such as Pol-Mot of Poland, Erkunt Tractors of Turkey and others. Carraro India supplies the T5s to Mahindra & Mahindra, Escorts, Punjab Tractors, Sonalika, TAFE, and many others in India. These are also exported to Landini Tractors of Italy, Alcelik of Turkey, Zetor Tractors from Czech Republic, Farm Trac (Escorts’ global business) and others. On the other hand, New Holland India is one of the major buyers of Carraro’s T3 transmission systems made at Ranjangaon plant.

R&D to fast-forward growth and development

Marking another substantial development to consolidate its Indian footprint, Carraro has also boosted its R&D capabilities (under a separate entity called Carraro Technologies) in India. When the firm first began its R&D operations in Pune in 2006, it used to provide engineering services to its counterpart in Italy where actual prototypes were developed and designs were approved before mass production of the final products would start in India. However, now with the expansion of R&D capacities in Pune, the company will be capable of making prototypes of transaxles (transmission systems and axles) and other crucial components locally, translating the efforts into quicker development of these components.

As a part of its R&D expansion, the company has more than doubled the space, has setup a training centre, a tool room designed for disassembling and studying axle and transmission systems, and plans to install a host of new equipment which would further benchmark the production processes.

According to officials at the Ranjangaon plant, for machining of the gears, transmission and axle blocks, the facility currently houses nearly 45 fully automatic CNC machines where each of these are programmed with 120 types of tooling programs and can machine a gearbox block in 90 minutes. According to Sunil Puranik, director, manufacturing, Carraro India, “these high-end CNC machines cost in the range of Rs 2.5-3 crore. We plan to install five new CNC machines in 2014.”

Talking about the assembly lines, Puranik revealed that “our assembly lines are flexible with complete traceability of each unit which is rolled out. We can make 2WD (two-wheel drive) and 4WD (four-wheel drive) transaxle systems on the same assembly line. We have built our own quality test mechanism which ensures that each of our products is checked and tested before being approved.”

Autocar Professional understands that setting up core manufacturing operations in India will give the Carraro Group considerable benefits in the areas of raw materials and components, operational costs, logistics and other overheads. For example, as against Europe, where employee costs stand in the range of 15 to 20 percent of a company’s overall expenses, the same in India can be contained within five percent. Without disclosing any numbers, BalajiGopalan, Asia Pacific HR director, India & China region, Carraro Group, agreed to these rough estimates.

So, overall, it's all too clear that the Italian major will increasingly farm out as well as leverage R&D activities to its Indian arm to drive growth globally.