For India’s automotive sector, 2012 basically reiterated the trends we saw in 2011. Sales of passenger cars, in particular, fell and SIAM has forecast that sales will likely grow by just 1-2 percent in the current financial year. 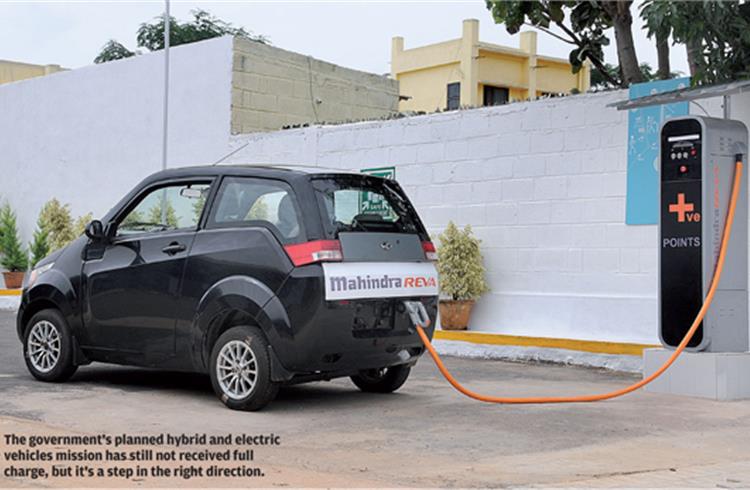 For India’s automotive sector, 2012 basically reiterated the trends we saw in 2011. Sales of passenger cars, in particular, fell and SIAM has forecast that sales will likely grow by just 1-2 percent in the current financial year. After sales in September fell 20 percent, SIAM asked for the Automotive Mission Plan to be postponed by a decade, an indication of how bad things are.

Buyer sentiments were affected by high interest rates, part of the government’s policy to tame inflation. However, this has affected business with investments falling or being put on hold. It is no wonder that dealers from Tata Motors to Renault India have been offering discounts to woo more buyers into the showrooms. Apart from a slowdown, a weaker rupee has affected sales of CKDs and CBUs which has resulted in relatively flat sales for the luxury vehicle sector.

But business is all about brands and their power to attract the customer and command a premium in the marketplace. Brands have their origins in good and enduring ideas. Call it innovation or out-of-the box thinking, it’s the idea that comes first. So what were the ideas that mattered from an automotive point of view in 2012? Read on. . .

Last year, this magazine applauded the government’s decision, announced in the Union Budget, to have a hybrid and electric vehicles mission. That has not seen the light of day despite the Union industries minister saying at the SIAM annual meet that it was “two weeks away”. Such an idea has the potential to reduce India’s overwhelming dependence on imported crude in the long term. At present, India imports 70 percent of its crude oil needs. This is an ambitious but worthwhile plan. It is a good idea, and retains its place.

India’s reputation as the country with one of the worst accident records continues but now the Union surface transport ministry appears to be serious about doing something to rectify this situation. Amendments are being discussed to bring about changes in the Central Motor Vehicle Act to enforce stricter penalties for road accidents.

The ministry has also kicked off a plan to identify and fix the 25 most accident-prone locations in the country. A life is lost due to a road accident every four minutes, so anything to reduce this is welcome.

Renault is the toast of the town with its five-seater Duster that has been selling very well. Sales have crossed the 5,000-mark, thanks to a product that scores on design and practicality. Renault has also begun to export the vehicle, badged as a Dacia, and the first consignment of 350 cars was shipped to the UK last month.

Mahindra & Mahindra’s refreshed Bolero has been a hit, building on the vehicle’s rugged practicality. Sales crossed the 10,000-mark in monthly thrice in calendar 2012. The refreshed Verito also got off to a good start, indicating that the company has established itself as the master of refreshes. Can Tata Motors do something with its 407?

Nissan’s Sunny saloon has been the best news for the Japanese carmaker whose Micra hasn’t quite brought in the numbers. The car's USP is spacious interiors and boot space at a value price, a great offering in the midsize segment.

One great idea, which was brought to fruition, in a sense, was the staging of India’s first Grand Prix at the Buddh International Circuit in Noida in 2011. The event had its second edition last year and while the crowds weren’t as much as in 2011, the real success has been India’s ability to pull off a world-class event without any hitch.

More importantly, change is underway for the Auto Expo. Anyone who went to the week-long event in January last year would still remember the unruly crowds and dirty toilets that threaten to sully the image of the auto fair, widely considered one of Asia’s most important. Now, this event will move to the outskirts of Delhi in 2014 where it will take place at the India Expo Centre and Mart at Greater Noida. It’s a step forward in making India’s premier show better managed. Critics would say it was about time this was done.

At a company-level, the Hero Group, which split from mighty Honda two years ago and unveiled a brand new logo, has invested about Rs 2,000 crore in an R&D centre and also inked deals with Erik Buell of the US and Engines Engineering of Italy. The company has also re-branded all its products as Hero, eliminating the Honda tag which has helped in no small way in making the company India’s leading two-wheeler company. The range is now purely Indian and Hero wants to take the brand abroad, no easy task.

Speaking about two-wheelers, Bosch India announced that it has developed an ABS system for motorcycles equipped with at least one disc brake and hopes to offer them commercially in 2013. This will be great step forward in making bikes safer and can cut down the high two-wheeler accident rates in the country.

Did advertising help or was the product itself much improved? The Tata Nano has done well with the 2012 edition recording sales of 75,000 units in January- November 2012.

The new management at Tata Motors is keen to make the Nano great again and its performance in 2012 would be heartening for the company.

Continental has developed an innovative turbo-charger that will make its debut in Ford’s 1.0-litre EcoBoost engine that will power the soon-to-be-launched EcoSport SUV. This part will help offer power comparable to an engine double its size. That innovative turbocharger could now be offered for other vehicles in India also. Continental has also been in discussions in China to offer it to other OEMs.

Gender diversity got a boost with the launch of the Yamaha Ray scooter that is made at an all-women assembly line. This initiative is one that we feel should be replicated across all industries and is a must if corporate India and the auto sector are to ensure that men and women are treated on an equal footing. For women who come from small towns to work in the big cities, this is a huge encouragement. At a time when there has been a nation-wide outpouring of anger at the rape case in Delhi, here’s one reason for hope.

Ashok Leyland introduced haulage trucks fitted with twin-speed rear axles and other modifications that it says will up fuel efficiency by 10 percent. Deployed on 25- and 31-tonners in both 6x2 and 8x2 configurations, the new technologies have been customised for the company’s driveline, with the twin-speed axle being the main change. This allows the driver to shift to fuel-economy mode, while cruising on highways, by pressing the ‘twin-speed’ button enabling faster turnaround, improved driveability and reduced noise levels.

It was a small news item in a national daily but its importance cannot be understated. Fifty years ago when they were installed, traffic lights in Srinagar went defunct and were never replaced. Recently, Srinagar got its first set of traffic lights that were welcomed by the city’s residents. Considering the way motorists in the big cities like Mumbai jump the lights, here’s a good idea. Respect traffic lights.

On now to 2013 and hopefully new ideas for public transport, safety and fuel efficiency. This list is by no means exhaustive and we at Autocar Professional would like to hear from you about new products, ideas and innovations that your company is working on.