Where GM gets its tech prowess

Housed in the highly-secured International Tech Park, the Technical Centre is at the heart of a resurgent GM globally, and its growth in India. 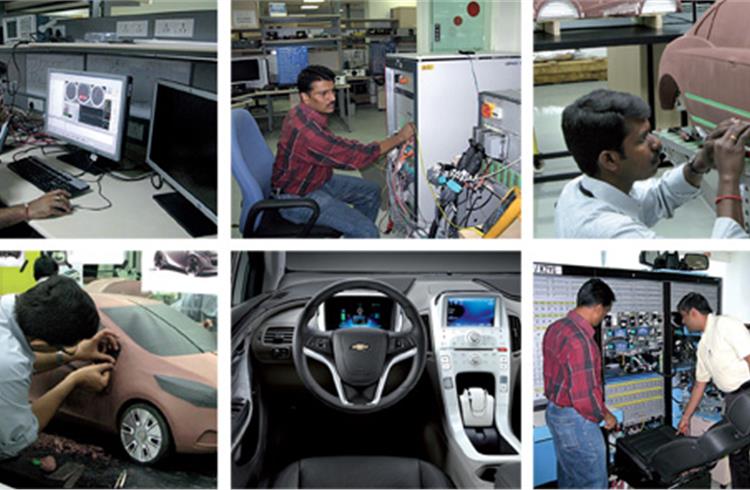 When a driving enthusiast revs up and zooms about in a Corvette on a US freeway, an engineering team in Bangalore feels a sense of pride. That’s because the software for the car’s instrument cluster that provides all critical information to the Corvette driver was developed at General Motors’ Technical Centre India in Bangalore.

Housed in the highly-secured International Tech Park, the Technical Centre is at the heart of a resurgent GM globally, and its growth in India. “We have built, and are continuing to build our capabilities as a Centre,” says Ryan D Baur, vice-president, engineering and operations, General Motors Technical Centre, in a guided tour he gave Autocar Professional earlier this month.

Playing an increasingly important role to support GM’s Indian operations is one of the Centre’s key objectives. Its various teams work have worked on models for India which come from GM India’s Chinese co-owner SAIC. A team within the Technical Centre is playing a critical role in localising these models. These cars will debut towards the end of this year and will see an almost-new-look GM India.

The Tech Centre has a staff strength of 2,000 engineers. Baur says he will not talk about full model development capabilities as yet but he definitely sees the Centre churning out model refreshes in the near future. “We already have worked in local mid-cycle enhancement responsibility. We are also working on having the full capability for any programme here in India. You are talking about ground-up vehicles. That will depend on the market situation and our presence here,” says Baur.

The recently launched BS IV-compliant Chevrolet Tavera Neo 3 is an example of the Centre’s contribution in a product’s mid-cycle enhancement. The vehicle engineering team also worked on the calibration and tuning of the BS IV engine that’s being sourced from International Cars and Motors.

However, the most significant achievement of the Tech Centre is the one-litre diesel engine that powers the Beat. Baur wouldn’t comment on whether it may be joined by some more derivatives, but indicates that there could be more in diesel, from the Tech Centre. “Diesel engine, especially small diesel engine development, is emerging as a very critical skill for us here as well as emerging markets globally,” says Baur.

The rate at which GM is investing in building capabilities at its Tech Centre, it may not be surprising if the cross-functional teams manage to come together and build a car ground-up in India. “In India, the youth have done well to earn the respect and confidence of our global colleagues, and are therefore contributing to provide outputs to sub-systems or systems for millions of GM cars across the globe,” says SandipSarkar, head of the electrical systems, controls and software engineering team.

It’s not only the Corvette cluster, but the 2012 Cadillac ATS’ cluster, body control module and HVAC software have all been developed in Bangalore as well. The cluster team in the Centre, for example, is already thinking about model year 2016, as “model year ’13s are wrapped up because they are in production in the US, while model year ’14 is at a fairly advanced stage, and work on model year ’15 is in full swing!"

The Chevrolet Volt may not be seen on Indian roads, but Indian engineers have made significant contribution to it. Its instrument cluster and body computer came from Bangalore. Teams also contributed to other departments of the car such as the HVAC and battery control module.

The electrical systems division is just one part of the whole range of activities at the GM Tech Centre. The design centre, with over 100 designers, boasts of a wide range of activities that involves the entire design process except building the final running prototype.

As I walked around, I saw a host of designs being worked upon, some of which may appear as models overseas, some here, and some may not see the production line. Some of the functions like garnish quality check and clay milling were added recently.

“We participate in portions of car development in most cars. In some, we may do the sketching, for others, developmental work, in some, it may be digital work, and in some we may be doing the physical work. Very often, the physical work will take place where the car is developed fully,” says Anil Saini, director, design studio, GM Technical Centre.

The quality check team in the design department does the final inspection of each component to check whether or not it meets the design parameters. Unless the production team gets the approval in Bangalore, the commercial production may not begin even in Thailand or Indonesia. “We have done garnish work of all the cars, because this (Bangalore) is a Centre of Excellence. We definitely participate in touch, feel of most (GM) brands. We encourage our designers to think beyond Chevrolet. But Chevrolet we have to think because it is an ‘Indian’ brand,” says Saini.

Next year, the GM Tech Centre, one of GM’s seven ‘primary’ tech centres globally, will celebrate its 10th anniversary. It certainly has much to look back at with pride even as it prepares for a bigger role in GM’s Indian, and global, juggernaut.

How has the evolution process been at the Centre?

As we evolve, so have our capabilities. We already have worked in local mid-cycle enhancement responsibility. We are also working on having the full capability for any programme here in India. We are building from the Tavera. We partnered in its BS IV enhancement and also partnered other programmes with our global tech Centres.

What role did the Centre play in the development of the 1.0-litre diesel engine?

The Beat diesel is unique to India. It’s the smallest diesel engine in GM’s portfolio as far as I know. It was designed in collaboration with our global powertrain engineering activity. Our powertrain team worked collaboratively to define the requirements, sourcing, for calibration. We collaborated with our European team.

Can it be spawned into a family of engines?

Our advantage is that we can collaborate globally in many engineering functions to bring the best products to India. Diesel engine, especially small diesel engine development, is emerging as a very critical skill for us here in Bangalore as well as emerging markets globally.

What is the key area of strength of the India Centre?

It is a full-fledged engineering centre in terms of covering vehicle parts. We also have a sub-set of vehicle engineering, which we call performance integration. This is where we ensure we have the right suspension tuning, the right steering tuning and so on. We work to ensure that the human-vehicle interface is appropriate and to make sure that our calibration is appropriate for India ‘uniquenesses’. For example, the second gear start is a unique situation in India. We can collaborate with our global centres. We make sure that we can localise as much as possible in India.

We started the powetrain group in 2007, and we have grown that group significantly to over 700 people. We also have a design centre that provides the unique India design, colour, and styling. We have a manufacturing group that works with our manufacturing organisation to make sure that we have the right requirements. For example, die design for a certain part. We leverage global General Motors in all the knowledge that has been developed in over 100 years of making automobiles. We are very closely linked to GM. We operate in the same global vehicle development process.

Are you also playing a role in localising the SAIC products headed to India?

Very significantly. We have other global products that have been designed and implemented in India such as the Cruze and Chevy Beat. We are working in the same manner with other partners (SAIC). We are leveraging some of General Motors’ powertrains to integrate into those vehicles for India.

Will you also develop vehicles from scratch?

One part of our vehicle engineering department is advanced development group. We work in conjunction with the global General Motors as we look to the product portfolio and architecture we have globally. We constantly evaluate the appropriate usage of architecture in India and keep looking to see what kind of new product we can bring to India. Our mission here is to support our global activities and support our local market. We do work locally, globally. We are in virtually every sub-system of a vehicle. You can also see it in our physical test lab that we constructed last year.

Can you give us examples of this Centre’s participation in projects like the Volt?

We have supported other groups in executing all GM vehicles, not just the Volt. However, the Volt is unique. We have a strong group here in electrification team, in terms of motor design, software testing in order to support our global teams in executing the vehicle. Also, you will see a lot of activities in body control modules, HVAC and clusters.

The biggest one is the diesel engine for the Beat. We have done projects in the areas of chassis, interiors, body, electrical, HVAC, advanced vehicle development, performance integration, knowledge based engineering work and more. We do design work for all of GM and pre-production operations too. We play a very important role in GM’s global operations here in South East Asia. We work with Russia, Uzbekistan, Thailand, Indonesia. We do manufacturing integration, in determining where we should build assembly plants. We design the dies and get involved in tooling up body shops.

What are the other emerging areas of expertise?

This tech centre has a group that does safety analysis globally. It has very good capability in this area and we are continuing to grow that to ensure that as regulations come in we are ready to meet those requirements locally. We have a pedestrian protection test lab. It is not a current legislation but it is coming, we believe. We can support global development and local requirements also. We are also promoting safety awareness in association with the Bangalore Traffic Police, for example. We are not only supporting global vehicles but also supporting from a safety point of view for our current production.