The engine maker is ramping up capacity and launching newer platforms in its endeavour to double turnover in the coming years, says Eliot Lobo. 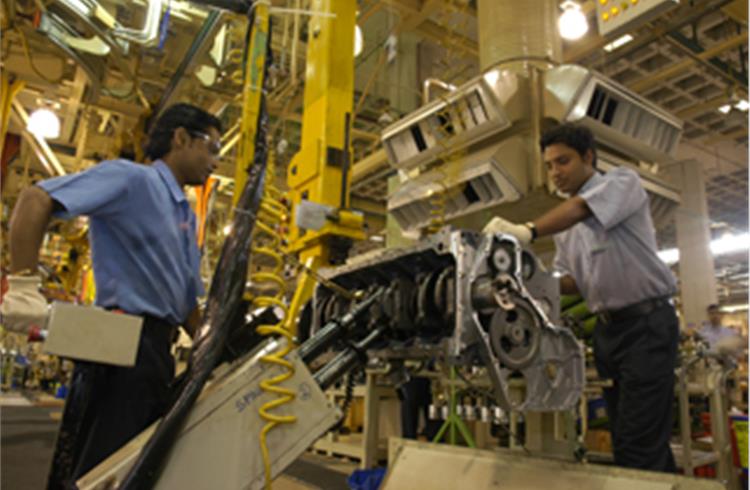 Last year Cummins in India crossed $1 billion in sales of which its automotive engine business alone accounted for over $260 million. This included contributions from Cummins Turbo Technologies (formerly Holset), Fleetguard, Cummins Exhaust (formerly Nelson), Valvoline Cummins, and Cummins Sales and Services, from among a total of 11 entities under the India area business office of Cummins Inc. They will play a significant role in its drive to double revenues to $2 billion by 2010.

Most of the action at present is taking place at Jamshedpur, where Tata Cummins (TCL), the 50:50 joint venture between Cummins Inc and Tata Motors, manufactures the legendary mechanical B-series engine. TCL today is of course a very successful operation. "It is way ahead of our expectations in erms of demand and profitability. Everything has now exceeded what we had initially conceived for this operation," says chairman and MD of Cummins in India, Anant Talaulicar.

The company had put in a capacity of 60,000 units a year initially (when production began in mid-1995), which it subsequently stretched through productivity improvements. It currently produces about 70,000 rounds of machined blocks and heads on a three-shift basis, six days a week. "Last year, we made around 91,000 Euro-II B-series engines, 85,000 of those for automotive use," says vice-president of automotive business for Cummins India ABO, Arun Ramachandran. "We were running overtime, running holidays and importing parts.”

In December 2005, Tata and Cummins reached an agreement to expand the capacity of the plant to 120,000 units. "The target was to do that this month (July) from an assembly perspective. So our assembly and testing operation needs to be able to produce at a clip of 120,000 per year on a two-shift basis. The third shift would give us even more upside if needed," Talaulicar says. Because of the longer lead time for machining equipment to be put in place, the company will have the capacity to machine a full 120,000 rounds only in December – and on a three-shift basis.

Why the difference? "Machining is very capital-intensive. When you put in that kind of investment you want to sweat your assets all the time. Assembly is less capital-intensive, so two shifts is fine," he explains. To meet spikes in demand, TCL will "lean on" Dongfeng Cummins Engine Company in China to bring in machined components and assemble them on the third shift.

But even that is not going to be enough. When the company announced last February that it would invest $60 million in the expansion, it intended to do this in two stages – take capacity first to 100,000 and then to 120,000 units. "Halfway through, we decided to jump the two stages and go in for a single stage. We put all the 120,000 units in at the first go, and all of that is spoken for," Ramachandran says. "We would need to go in now for one more round."

Cummins' OEM relationships are growing. "We are adding customers," says Talaulicar. "Now we are also supporting Asia MotorWorks and Eicher. And Tata Motors is growing significantly in terms of global scenarios." For the upbeat CMD, 120,000 units is just one milestone. "We have to look beyond," he insists. "We do our planning on the next five-year basis. Right now we are in that planning mode, discussing what happens beyond 120,000 and when."

Of course that number is still on a two-shift basis. But TCL has been scouting around for additional capacity elsewhere, and has found in Simpsons, Chennai, a contract-assembler for its 6B mechanical engines. "This will account for a limited number, but will give us the ability to meet spikes in demand," Talaulicar says.

In addition to this expansion, TCL is also preparing to bring the Cummins ISBe electronic engine platform to India. This is a larger version of the B-series, with electronic controls and a high-pressure common rail fuel system. "By mid-2008 we'll have this engine available in a Tata truck," he says. The flexible incremental capacity will enable TCL to ramp up production of the 6B5.9 until 2010 and then increasingly replace it with the 6.7-litre ISBe from then on.

Talaulicar points out that Cummins is the only player in the country that has been able to meet the Euro-III emissions standard with an all-mechanical product. "When the Euro-III regulations were introduced in 11 cities in 2005 we found that most players were not able to meet them without electronics and common-rail fuelling. We were uniquely able to do it with a mechanical solution. The advantages of this are that it costs less and is much easier to service."

Presently only a small number of this engine – 1,000 units a year – goes into Tata's 1512 city bus chassis. The mechanical Euro-III engine will really get its boost in April 2010. "The ISBe will get its boost in 2014 or 2015, whenever we move to the next level of emissions," he says. Although it is being introduced at Euro-III "for certain performance requirements", the ISBe is primarily intended to support Euro-IV, which comes into force in 2010.

"If an OEM wants to launch a state-of-the-art vehicle with great fuel efficiency, torque, and all that – a premium product – then yes, it can do that next year. But from a regulatory standpoint the need will only start in 2010," Talaulicar says. For Euro-III, the mechanical engine and the ISBe are being positioned in different segments. The former is available in two ratings of 130bhp and 180bhp; the latter from 180–285bhp. "The ISBe is for customers who want enhanced driveability, fuel economy, and better refinement," he says.

Cummins India Ltd (CIL), the publicly listed company in which Cummins Inc holds 51 percent, manufactures the 8.3-litre C-series platform at its plant in Vimannagar, Pune. This engine is for on-highway customers like Tata Motors (for the Novus tipper and tractor) and others, as well as off-highway and power generation. Talaulicar says CIL is now in the process of bringing in the 8.9-litre ISLe electronic engine, an evolution of the C-series platform. This will replace the C-series in automotive applications by 2010, when the entire country moves to Euro-III.

The ISBe and ISLe will both be capable of meeting emissions norms envisaged for 2015 and beyond. They are Cummins' long-term products, starting from 2010 but moving up in scale beginning 2015. They are the first examples of Cummins' worldwide common platform (WWCP) strategy. "The beauty of the Cummins technology is that we have come up with a way to have stable platforms that meet multiple levels of emissions purely by changing some subsystems, not the entire engine," says Talaulicar.

##### The ISBe, for example, can be supplied in Euro-III, Euro-IV, Euro-V, Euro-VI, US EPA 2007, and EPA 2010 spec simply by changing the emission solutions device and maybe changing the calibration slightly. But the basic platform remains the same. "We have been able to leverage our investment in the block and head design, and the rod and all – we've been able to leverage that for multiple steps of emissions, which makes us very competitive. The OEMs value that. They do not want to reconfigure their entire trucks for these engine changes," he adds.

In introducing these two platforms, however, emissions wasn't the only imperative for Cummins. Talaulicar sees a definite shift in the market towards the upper end of the power spectrum. "If you see where our volume used to be, just a few years ago 100bhp was where the sweet spot was. That moved up to 125bhp, and 140bhp is where it is at right now. Then it is going to go up to 160bhp-180bhp. It is going to keep moving up. Our mechanical B-series can handle up to 230bhp. The ISBe goes up to 275bhp. The C reaches 300bhp. The ISLe goes up to 375bhp. As the market starts shifting, you are going to see increased participation by the ISBe and ISLe."

So when does he expect the ISLe to really pick up from a power perspective? "The operator will buy a truck with that kind of engine because he can carry higher loads. He can actually carry much more on one truck – rather than doing multiple journeys, he can move the same load with one." In a country where the dominant mentality is least cost of acquisition, people are tempted to squeeze the last ounce of juice out of the gunny bag, as Ramachandran puts it.

As a consequence, even though power has been going up, vehicle weights have also going up at the same time, which means the power-to-weight ratio has not changed significantly, nor does he expect it to. "You will still see trucks crawling up the hill. Will they be high-performance trucks? Yes, high-performance in the sense that they carry twice as much – but they don't carry twice as much twice as fast. They carry only twice the load at about the same speed. Right now they are high-performance in terms of load-carrying ability, but not in terms of moving it faster."

Ramachandran points to various industry reports that suggest the need for structural changes in the methods of tax collection, because the number of stoppages along the way is large enough that no one is able to take advantage of higher speeds. "You build better roads, but you have toll stops, octroi stops, truckstops, border checkposts… And then some of those pass through cities – now you are not allowed to ply through certain cities till you reach a certain time. All of a sudden the end-to-end time doesn't significantly change."

But Cummins sees opportunities up the scale nevertheless: Talaulicar reveals that it is already looking beyond the ISLe at the 10.8-litre ISMe, its smallest-displacement heavy-duty platform worldwide, for niche applications like tractors and tippers. "Five years out you are looking at 10,000 trucks a year with the ISLe. Right now it's zero. For the ISMe it's probably 1,000 or so," he says, putting this into perspective. And because the numbers are very small, it will probably be imported as a full engine or as a kit and assembled here, he adds.

Ramachandran expects the mining market to take the lead on this platform with the industrial-spec QSM. "For the automotive market we are talking to customers. We have told them what the ISMe does, what it does not do, what's its availability and so on," he says. "There is interest. Of course, our OEMs are looking globally," Talaulicar adds, in unspoken reference to Tata's World Truck project no doubt. Beyond that there is the 13-litre ISZ, currently being developed by Dongfeng Cummins for world markets, but that's "looking too far out".

He also makes it a point to mention that Cummins is looking at an entry into the LCV segment in India. It is productionising two platforms in China – a 3.8-litre and a 2.8-litre, both four-cylinder engines – in partnership with Beiqi Foton that could address this market. He refuses at first to be drawn into discussing how soon they might make their way onto Indian roads, but later relents –"before 2010".