Comstar India sets up plant in the US, plans JV in China for supplies to Volvo Geely

Comstar India sets up plant in the US, plans JV in China for supplies to Volvo Geely 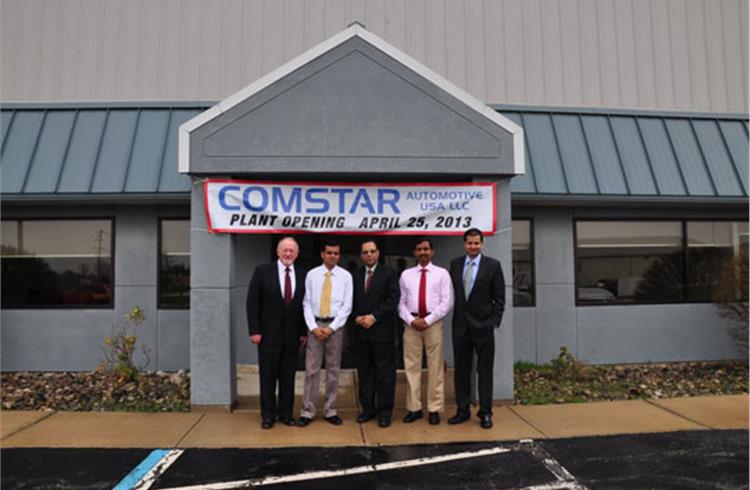 May 6, 2013: As part of its strategy of growing its OEM business globally, the Chennai-based Comstar Automotive Technologies (P) Ltd has spun off a US subsidiary Comstar Automotive USA LLC to be headed by Sat Mohan Gupta, the current CEO of the parent Indian company (seen above with the launch team, and below addressing the gathering).

The new plant at Tecumseh was inaugurated on April 25. Gupta, who will be the president and CEO of the US arm, says the decision in favour of a US manufacturing facility was based on proximity to its major customer, Ford Motor Co. Comstar’s starter motors go on Ford’s high-selling F-Series full-size pickup trucks built at the carmaker’s Kentucky assembly plant in Louisville. “Tight timing, the transfer of business and the launch had to happen in a window of 9 weeks. Any movement of equipment across the world was a ‘No-No’, and finally, it was a matter of growing Comstar’s manufacturing footprint,” Gupta told Autocar Professional.

Comstar has drawn up a roadmap for setting up a battery of satellite assembly plants in key growth markets and a US footprint forms part of that gameplan. Other markets where it is exploring opportunities include Brazil, Russia and China.

While kicking off with supplies to Ford’s heavy duty trucks in North America, Comstar plans to expand supply of its starter motors to passenger cars of General Motors and Chrysler as well in that market.

“Comstar jumped in when Ford enquired if it was interested. It meant that we could begin the journey of establishing a global footprint immediately, though it was fraught with challenges and risks. This defies the common wisdom of high labour costs, saturated markets and uncertainty of the US economy,” added Gupta.

Comstar is a strategic supplier to Ford and Volvo globally and this will be a natural culmination towards consolidating its relationship with these OEMs. Despite concerns on economy and a high level of joblessness in North America, vehicle sales in the region have started to pick up since last year. The heavy duty truck business is a high-margin business for Ford which holds a good share in this market. Moreover, the 6.7-litre diesel engine is the backbone of the super duty trucks – F250, 350, 450, Expedition and Navigator. “This business guarantees a steady volume with a good possibility of growth,” adds Praveen Chakrapani Rao, associate vice-president. “Setting up a plant in the US though was a challenging task for an Indian Tier 1, especially since it involved working things out within a time span of 2–3 months.”

Expanding into the Chinese market

Meanwhile, in China, Comstar has inked a memorandum of understanding with a Chinese Tier 1 vendor for manufacturing starter motors and alternators for Volvo Geely passenger cars as well as other global OEMs like Ford for the Chinese and Taiwanese markets.

It is also in the process of tying up the loose ends of a 51:49 joint venture with the Chinese supplier with the Chinese Tier 1 holding a 51 percent stake and Comstar the remaining 49 percent. The JV is expected to be finalised by June 2013 and will involve setting up a manufacturing facility at Chengdu in SW China, opposite Volvo Geely’s upcoming manufacturing facility slated to become operational sometime this year.

Chinese carmaker Geely acquired Volvo Cars’ stake globally from Ford in 2010 and Comstar’s starter motors and alternators will go into the new vehicles produced in 2015-16. The JV plant at Chengdu is expected to go on stream in July 2014. For the last four years, Comstar has had a technical licensing arrangement with this Chinese supplier under which Comstar provided technology for the products that maintain the same global quality. While the investment for the new Chinese plant is still being worked out, Comstar has invested Rs 5 crore in its US facility at Tecumseh in Michigan funded by the company’s internal accruals.

After separation from Visteon in 2007, Comstar’s operations have revolved around its export-oriented facility at Chennai but the new business from Ford has opened up a new avenue of growth. The Tecumseh plant with a built up area of 12,500 square feet has a production capacity of 500,000 starter motors annually. Comstar, which manufactures starting and charging systems for passenger cars and commercial vehicles, has an installed capacity of over 3.8 million starter motors and over 1.0 million alternators in India besides 0.5 million starter motors in North America.

The company is a supplier to Ford, Volvo, Jaguar, Aston Martin, Mazda, Tata Motors and the Ashok Leyland-Nissan JV. Comstar is also expanding its manufacturing foot print in India at Gujarat where Ford India is setting up its new plant. It has been allotted 2.5 acres of land in the Ford Vendor Park at Sanand from where it will support Ford, Tata Motors and other OEM businesses in that region. It is also in talks with Maruti Suzuki for supplies. The company plans to invest Rs 12-15 crore in its Gujarat facility with work to start by the year-end; the plant is expected to be operational by the third quarter of 2014.

Comstar India has also developed advanced start-stop starter motors at its in-house R&D facility at Chennai and has been supplying them since the beginning of 2012 to OEMs in Europe.