OEMs would do well to recognise the many shifts among new car buyers in India over the past 5 years, as revealed in JD Power's 2013 India Escaped Shopper Study. 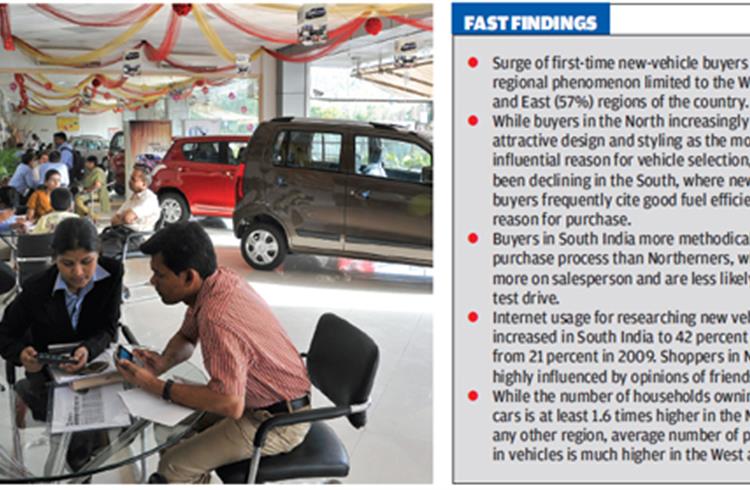 Car buyers in India, they are a changing. The criteria used by new-vehicle buyers in their shopping process have become strikingly different among the various regions of the country, according to the J D Power Asia Pacific 2013 India Escaped Shopper Study (ESS).

The study, based on the responses of 8,687 buyers and 3,271 rejecters of new cars and new utility vehicles who purchased their vehicle between September 2012 and April 2013, examines the reasons why new-vehicle shoppers consider but ultimately reject certain models in favor of another, was fielded from March through July 2013.

During the past five years, several shifts have occurred in this class of consumers across India specific to their shopping behaviour, the ownership experience and how the vehicle is used. As per the findings of the study, a surge of first-time new-vehicle buyers is a regional phenomenon limited to the Eastern and Western regions. Nearly 70 percent of buyers in the West and 57 percent of buyers in the East buy a new vehicle for the first time. In contrast, the proportion of first-time new-vehicle buyers has declined over time in the North and has remained nearly unchanged in the South.

Although attractive design and styling has increasingly become the most influential reason for vehicle selection among buyers in North India, it has been declining in the South, where new-vehicle buyers frequently state good fuel efficiency as a reason for purchase.

New-vehicle buyers in South India are more methodical in their purchase process — which involves conducting extensive preliminary research, visiting dealerships, taking test drives and negotiating — compared with buyers in the North who tend to do less research before visiting a dealership and rely on the salesperson for information. They are less likely to test-drive the vehicle too.

“One of the likely drivers behind these changes is the pace of urbanisation, which is resulting in the resurgence of multi-generation families living either under one roof or in close proximity to their relatives, especially in the North,” said MohitArora, executive director, J D Power Asia Pacific. “While this is resulting in a higher monthly household income, thereby enabling younger people to afford a vehicle, purchase decisions are also likely to be influenced by the growing family size.”

Role of the internet

Arora says, “Internet penetration has been increasing in India each year as consumers look for presumably unbiased sources of information at their own convenience. Information on technical specifications, vehicle features or accessories, vehicle price, vehicle brochures/ pictures, warranty information, spare parts information are increasingly being sought on the internet as consumers prepare their first-cut shopping list.”

While the number of households owning multiple cars is at least 1.6 times higher in North India than in any other region, the average number of people riding in vehicles is much higher in West and South India. Also, the penetration of small cars is declining at a faster pace in North India, with consumers increasingly preferring to buy larger cars.

According to Arora, “Vehicle buying in India is triggered both by rational and emotional needs. It is one of the most visible marks of social progress. The decision to buy a vehicle is usually finalised over a period of time. Once the decision is made and the payment and other formalities are completed, new-vehicle owners want to immediately show off their prized possession. Therefore, availability of product nearby has always been critical to vehicle selection and purchase. Customers, especially those in cities where there are multiple dealerships of the same brand, are selecting dealers based on faster delivery period. The Escaped Shopper Study also highlights that customers are ultimately rejecting models that they had initially considered owing to longer delivery periods.”

According to the study, while the dealer closest to the potential buyer’s home continues to be the most influential reason for dealer selection, it has been declining during the past five years. Immediate delivery is increasingly emerging as a key consideration in choosing a dealer, cited by 16 percent of customers as the most influential reason for selecting a dealer in 2013, up from 8 percent in 2009. The study finds that longer delivery time is the second-most-influential reason for rejecting a vehicle that shoppers had initially considered purchasing. An increase in vehicle delivery time to 12 days in 2013 from five days in 2009 has likely driven this as a key consideration during the purchase process, as 17 percent of shoppers in 2013 have rejected the vehicle they initially considered due to the longer delivery period.

OEMs, most of whom are gunning for bigger sales numbers, would do well to heed these findings. And also remember where they read these first.

What are the major influencing factors for buying a car for the significant number of first-time buyers in West and East India?

The scope of the study is limited to looking at reasons why consumers reject certain models that they had initially considered. That said, the reasons for purchase of car are fairly similar between first-time and experienced buyers in India. With the growth in disposable income and finance availability, more people in the East and West are now able to afford cars.

Design and styling seem to be a more influential factor in the North. What percentage of buyers fall in this category in the North? What genre of vehicles are more preferred in the North and the South?

Nearly one out of every five buyers in the North cite “attractive design and styling” as the main reason for purchase. Interestingly, Utility Vehicles (SUVs and MPVs) are gaining penetration both in the North and the South.

Based on our understanding, consumers in North are primarily going on bigger vehicles taking into consideration their growing family size. Nearly 44 percent of car-buying households in North have six or more family members. In contrast, consumers in the South are buying bigger vehicles as more people normally ride together in a vehicle. Sixty-seven percent of car buyers in the South have three or more people normally riding together in a vehicle while it is only 24 percent in the North.

Small hatchback cars account for around 55 percent of passenger vehicles sold in India. In the North it has dropped to 53 percent in 2013 from 69 percent in 2009. Customers are increasingly opting for Utility Vehicles (both SUVs and MPVs).

Which brands have performed the best in terms of customer retention? In an increasingly competitive and changing environment, is the concept of brand loyalty getting diluted?

It will be difficult to say whether brand loyalty is getting diluted. There is always an element of boredom that prevents buyers from buying the same nameplate in the same segment as the previously owned model. However, manufacturers who have products available that help customers to successfully upgrade from one segment to the next higher segment tend to display relatively higher brand loyalty.

What kind of change do you expect in the marketing and retailing of automobiles in India in the coming years? Is the conventional selling/buying approach expected to undergo a sea change?

The path that consumers take to purchase cars has become strikingly diverse among the various regions of India. Marketing and retailing of cars would have to take note of the regional nuances when reaching out to customers. For instance, while reaching out to consumers in the South, manufacturers may need to design their websites in such a manner that it not only provides up to date information but is also easier to navigate.

On the other hand, for consumers in the North, training of front-line staff on how they engage with the customer may become far more critical. Manufacturers may also need to develop key sales and service standards that take the regional preferences into consideration. While the traditional brick-and-mortar chains are likely to continue, the customer interface processes at dealerships may need to be changed based on regional likings.

Do brands like Tata, Mahindra and Maruti too ride on the emotional preference as Indian brands over their peers in the buying process of the consumer? Why do Ford and Fiat customers shop around the most before purchasing their vehicle?

We have recently conducted a pilot study on Brand Influence and Positioning in India. Brands like Tata, Mahindra and Maruti Suzuki are strongly associated with being affordable, fuel-efficient and reliable which strongly resonates especially with first-time car buyers in India.

Nearly 50 percent of car buyers in India are purchasing a new car for the first time. This set of customers is generally known to be risk-averse and are influenced strongly by the advice of family/ friends as well as another owner of the same make. In smaller towns this is even stronger where customers even decide the variant and color based on what their peers or influencers purchase. Therefore, given the product range, USP, overall brand perceptions as well as reach of the three nameplates, a large section of buyers in India tend to consider them in their shopping list over other nameplates.

The best-selling models from Ford (barring the recently launched EcoSport, which was not covered in this year’s study) and Fiat are positioned in the highly competitive premium compact and midsize segments.

Owing to the availability of several models in the same segment, buyers of both these segments tend to cross-shop more than others. This results in higher cross-shopping rates being witnessed for Ford and Fiat.

What are the top three reasons why consumers reject a vehicle? How many of the respondents bought the car they first considered to buy?

‘Total price too high’, ‘Wanted better fuel economy’ and ‘Did not like exterior styling’ are the most cited reasons for vehicle rejection in India. Nearly 73 percent of customers in India are pre-decided on the make and model to buy. They consider only one model in their shopping list and end up buying the same make and model.