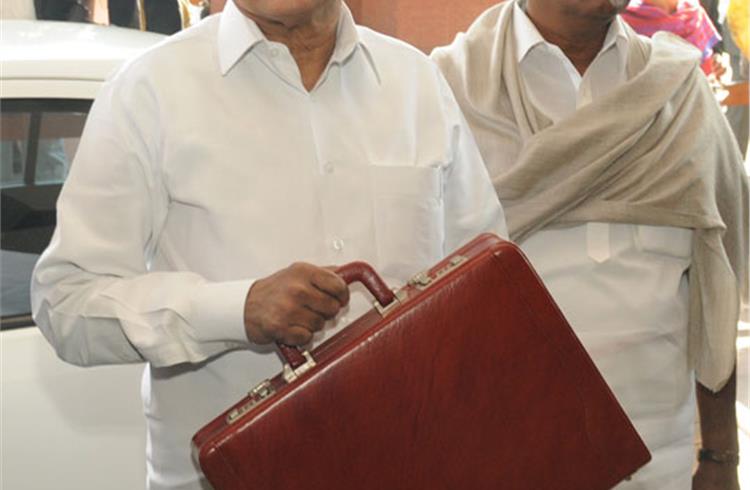 New Delhi, February 28, 2013: Announcing the Union Budget 2013-14, finance minister P Chidambaram has proposed 100 percent custom duties on high-end imported cars from the current rate of 75 percent, and from 60 to 75 percent on imported motorcycles above 800cc. Following the steep 25 percent hike in customs duties, demand for high-end imported cars (with CIF value exceeding $40,000/Rs 20 lakh and an engine capacity of over 3000cc for petrol-engined cars and 2500cc for diesel-engined cars) will be impacted, affecting luxury car OEMs like Audi, BMW, Mercedes-Benz, and Jaguar which have a significant number of models as CBUs (Completely Built Units). Imported supercar brands such as Ferrari, Lamborghini and Porsche will be affected too.

Sales of overall luxury vehicles in India could also be marginally affected following the surcharge of 10 percent on annual incomes of over Rs 1 crore. At present, this vehicle segment accounts for less than 3-4 percent of total industry sales. As far as motorcycles go, the 15 percent duty hike will affect Ducati, BMW, and the imported models of Harley-Davidson, all of whom have bikes above 800cc on sale in India. The CBU models (above 800cc) from Japanese bikemakers Honda, Yamaha and Suzuki will also see their sticker price go up. Hyosung, which currently has 4 models on sale in India, is not affected since all are below 800cc.

Booming SUV sector gets a shock The finance minister has also proposed an excise duty hike from the existing 27 percent to 30 percent on SUVs, albeit this hike will not apply to SUVs used in the taxi market. SUVs that meet the following definition will attract the higher rate of excise. To qualify, the SUV will have to be fitted with an engine higher than 1500cc, be over 4 metres long, and have a ground clearance of 170mm and above. This means compact SUVs like the Mahindra Quanto, the Premier Rio and the upcoming Ford EcoSport do not attract the new excise duty rate.

The hike in excise duties on SUVs will impact sales in this vehicle segment, which has been the sole one recording good numbers this fiscal. As per sales data from apex industry body SIAM, the passenger car market has posted a 1.8 percent decline in its April 2012-January 2013 sales of 1,556,283 units, while utility vehicles recorded a handsome 56.87 percent increase in its sales of 451,935 units year on year. Mahindra & Mahindra, which has been riding the demand for SUVs, will be the most hit considering that at 216,901 units, it got the bulk of these sales in the 1o-month period this fiscal. In what has come as a big relief for passenger car manufacturers, the Budget did not propose any tax on diesel-engined cars.

Tier 2 and Tier 3 component vendors to benefit With no change in the basic customs and excise duty for auto components, apex auto component body ACMA has welcomed the Budget. ACMA president Surinder Kanwar said, “ACMA welcomes the focus on measures to encourage the Micro, Small and Medium Enterprises (MSMEs), which constitute over 70 percent of ACMA’s membership and scaling-up has been a challenge for the sector. With assurances in the Budget that the incentives enjoyed by MSMEs would continue undiminished for the next three years should they outgrow their limits, is a step in the right direction. Further setting up of additional tool rooms and Technology Development Centres will encourage technology development and absorption in the MSMEs.” Kanwar added, “The enhanced allocation of over Rs 14,000 crore for buses under the JNNURM will also give a boost to this segment and the associated auto component consumption. Further, shortage of skilled manpower has been an issue of significant concern for the auto component industry, the outlay of Rs 1,000 crore in incentives for skill development will encourage youth to engage in appropriate vocational training which will benefit the industry.”

Commercial vehicle manufacturers will be marginally benefitted with the two percent reduction on excise duty on truck chassi, from 15 percent to 13 percent. Bus makers, of course, will laud the proposal to allot a “significant portion” of the Rs 14,873 crore under JNNURM to buy 10,000 buses. Apart from this, the Budget sought to give a fillip to the roads and infrastructure segments. Chidambaram said that about 3,000km of roads will be built in Gujarat, Rajasthan, Uttar Pradesh and Maharashtra. To boost investment in infrastructure, he would allow companies to raise tax-free bonds up to Rs 25,000 crore. The Budget has proposed increased allocations for rural infrastructure and hiked agricultural credit.

The nascent electric vehicle industry in India was expecting considerable charge in the Buget 2013-14 but will have to remain content with the exemption of customs duties on components for EVs being continued till fiscal year 2014-15.

Industry comments. . . In his immediate reaction to the Budget, Lowell Paddock, president and MD, GM India, said the industry has not got the recognition it deserves. He felt the industry, which is in “doldrums”, deserves stimulus. He, however, added that the Budget will not adversely impact GM’s investments in India. He also welcomed the extension of the concession on import of components for hybrid and EVs.

Paddock said: "The Budget is encouraging due to its focus on agriculture, irrigation, education, skill development, health care and infrastructure. But as far as the automotive industry is concerned, it did not meet expectations. We were expecting the rollback of the excise duty imposed last year. Instead, there is an increase of 3 percent excise duty on SUVs and also a hike in customs duty of 25 percent on high-end imported vehicles. These hikes are not on the expected lines and will impact the sale of SUVs. The automotive industry is one of the growth drivers of the economy with its backward and forward linkages to generate multiple and substantial employment opportunities. Any duty concessions would have helped the industry to register some growth as it has already started slowing down due to high interest rates, fuel prices, commodity prices, and negative market sentiments. Some concessions announced for electric vehicles and the increased allocation for the road transport sector are welcome decisions.”

Joginder Singh, president and MD, Ford India, said: “We welcome the focus on infrastructure development, social benefits for inclusive and sustainable growth and the investment allowance to boost the manufacturing sector is a positive move. We are disappointed that there is very little in the Budget that will help boost consumer confidence and revive growth. It is a missed opportunity to introduce measures that would have revived industrial growth significantly. The automotive industry has been going through very challenging times and we are disappointed with the increase in the excise duty for SUVs.”

Vikram Kirloskar, vice-chairman, Toyota Kirloskar Motor, felt the hike in customs duty on already expensive CBUs and SUVs will adversely impact the auto industry, which is the “locomotive” for the manufacturing sector, and a major employment generator. The extension of the concession on import of components for hybrid and EVs till 31st March, 2015 is a positive for the industry.

R C Bhargava, chairman of Maruti Suzuki India, said he isn’t disappointed by this balancing act of a Budget. “There is nothing in it to harm or hurt us. The stability of policy is something to be happy about.”

Michael Perschke, head, Audi India, said: “The increase in custom duty for imported cars and excise duty on SUVs is very surprising. It will severely impact the auto industry and its growth. We will have to seriously evaluate the impact of this hike on our prices and have no choice other than to pass on the increase to the customer. Overall, it will have an adverse impact on the automobile industry which is already going through a slowdown and specifically affect demand including that of SUVs. Currently, the industry is facing pressure from a number of factors and the government should have looked at extending support to it.”

Anders Grundströmer, MD, Scania Commercial Vehicles India, commented: “This is a good macro-economy focused budget. I expect that stability will be further improved especially with the incentives that will bring in additional investments and provide a fillip to the manufacturing sector. It is good to note that the duty on CVs has remained constant and this, we hope, will promote the sales ofCVs in the country. What will provide further impetus is duty concessions and extension of special duty rebates for electric, hybrid and all vehicles, giving room for alternate and green fuel. This will act as a catalyst for moving towards alternate fuels in the commercial vehicles segment as well. We also see immense scope for India’s transportation sector through the newly announced JNNURM project for buses and the various corridors that will provide greater connectivity hence furthering the need for good transportation systems in the country.”

Meanwhile, Vishnu Mathur, director-general SIAM, says: “The customs duty hike from 75 to 100 percent on imported cars is unexpected as is the excise duty hike on SUVs from 27 to 30 percent. The zero duty on EVs and hybrids is a good move as is the investment allowance of 15 percent on Rs 100 crore and above in plant and equipment and should revitalise a little bit of investment.”