The Ace in Tata Motors' pack

The Ace has crossed the million sales mark and now Tata Motors will launch a refresh and new variants to consolidate its position in the small commercial vehicle market. 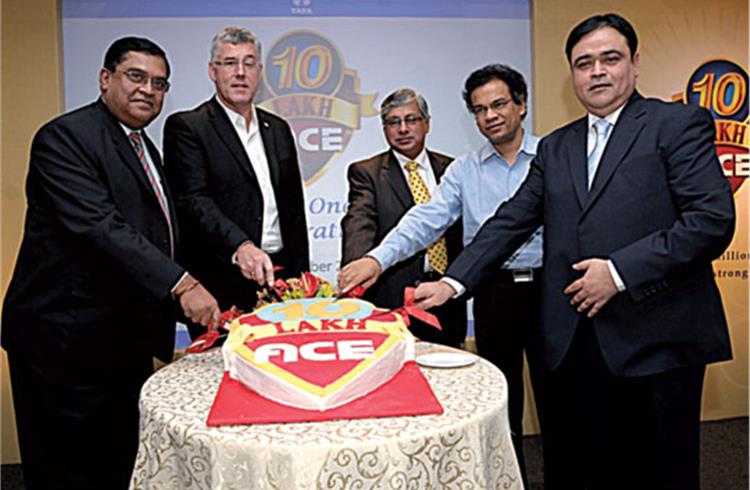 Tata Motors will roll out as many as 25 offerings in the commercial vehicle market over the next one year with at least six out of them being a part of the Ace brand. The first of the new Ace family is slated to debut by January as a refresh. It is the first time that the seven-year-old brand will see a refresh. “We want to make it a low-cost facelift. We don’t want to add fancy frills, because the customer is happy with its functionality. But it will look smarter. We’ll try to keep it between Rs. 5,000-10,000 (of incremental price) of the current one,” Ravi Pisharody, executive director (commercial vehicles), Tata Motors, told Autocar Professional.

Launched on May 6, 2005, the Ace crossed the million mark in sales in August this year. “These figures comprise the Ace and Ace Magic, not the rest of the Ace family,” points out Sandeep Kumar, head – sales and marketing, LCV, Tata Motors.

The Ace’s drive to a million units took close to seven-and-a-half years, with cumulative annual sales growth of around 39 percent. The company hopes to cross the next million in a shorter period. Ace’s sales for the first year stood at 29,929 units growing up to 214,068 units in 2011-12. In the April-October 2012 period, 125,560 units have been sold.

Tata Motors also plans to increase the number of sales points of the Ace to 2,000 in the “next couple of years” from 1,350- odd outlets now.

Among competitors, the Dost from Ashok Leyland Ltd (ALL) is the strongest rival, pitched at the Super Ace. The 2.5-tonner is struggling to meet demand as ALL has an annual production capacity of 50,000 units currently. ALL hopes to open a new plant in two years' time. There have been other competing products from Mahindra & Mahindra and Piaggio, but Tata Motors claims none have dented the Ace brand. Why? “Product performance is the reason,” says Pisharody. “Competing products promise better mileage, some have a common-rail engine, saying that common-rail means better fuel economy at the same price as the Tata Ace, but actually it is not delivered. On the ground, we’ve tested these back-to-back. Customers have started realising that our fuel economy is better. Some may be competitive at the rated load, but then in overloaded conditions, the fuel efficiency is superior in the Ace,” says Pisharody. In the India market, where overloading is a common phenomenon, the Ace, with a payload of 750kg is sometimes loaded up to two tonnes!

Recalling the conceptualisation and birth of the Ace, Girish Wagh, the brains behind the Tata Ace project, says in a brand video that the team “looked at rational and emotional attributes” while developing the smallest truck in India to take the fight into the three-wheeler goods carriers that were eating into Tata’s marketshare at the lower end of the commercial vehicle market. The Ace was designed to be built with simple jigs and fixtures with minimal investment. Therefore, the company created space at its Pune plant to manufacture the Ace and saved on building another plant. The solid sales growth, however, resulted in production in a dedicated plant by April 2007. “The Ace had as many 82 percent of components being outsourced. Many aggregates and components like the frame, axle, steering were outsourced,” says Prakash Telang, ex-managing director, Tata Motors. Till then, the company’s commercial vehicles outsourced “60-65 percent” of its components.

The small CV segment holds a lot of promise. Also, it is more immune than the M&HCV segment to negative factors in the economic environment. The growing Ace family is banking on just that.

The Ace’s first million sales have come in a little over seven years. How long do you think it’ll take to reach the next million?

I would say in three years’ time. If I include all the variants of the Ace family, which is Super Ace Zip and Iris, it’ll be even faster.

What helped the Ace stay ahead even as new competitors entered the fray?

So what helped the Ace to keep that competition at bay?

Product performance is definitely at the heart of it. Success begets success, the appeal of the brand is very strong, so the Tata Ace and Tata Magic as brands are very strong. Apart from performance, our reach, distribution and the efforts of our sales and marketing helped us.

We have also added variants. We launched a variant with stop-start technology and were the first to leverage the CNG opportunity in Delhi. We have capitalised on our first-mover advantage.