Targeted at the two-wheeler segment, the device functions independently and can replace electro-mechanical devices. Brian de Souza has the details. 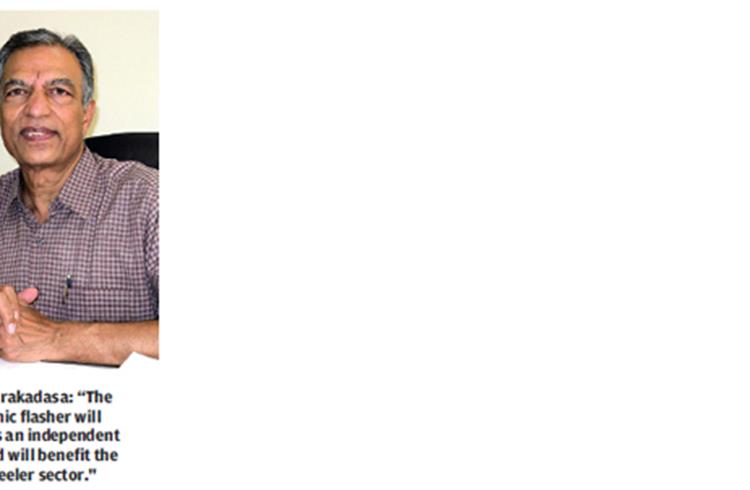 Bangalore-based Karnataka Hybrid Micro Devices (KHMD) has developed an electronic flasher and made key improvements in its multi-function regulator as well as is working on combinations of rectifier-regulators that convert alternate current to direct current. “We have developed a prototype and intend to show it to OEs,” says E S Dwarakadasa, CEO and managing director, KHMD, in a conversation with Autocar Professional. According to him, the electronic flasher, which is targeted at the two-wheeler market, is a reliable device that shows the side indicator. An independent unit, it can potentially replace the electro-mechanical device that tends to fail after a year or so.

KHMD has in the past worked on a variety of products which include an emissions chip, multi-function regulator and a thick fine resistor. However, the company is hugely bullish on opportunities to move PCBs to hybrid electronics, Dwarakadas says. The company is now working with 12 parties on such projects which also include one for a European-based outfit. It is also working with Delhi-based companies and a host of others which are in the core sector. New projects typically take between 18-20 months and so KHMD hopes to see these projects fructify in a year's time.

Over the long term, Dwarakadasa says that the scope of increased use of electronics in passengers cars is a fact of life but much depends on acceptance by OEs as there are cost implications at the end-consumer. Typically, a Lexus has about 40 electronic systems while Indian luxury brands have between 18 and twenty. While car sales are currently down in India, demand for more electronic content will only increase based on buyer demand.

Meanwhile, KHMD has been affected by the fall in the rupee's value and has had to pay out more for items such as resister and conductor paints used for making electronic circuitry. To overcome this, it is now looking for a local supplier of these items but Dwarakadasa admits that it has provided some sort of relief.

KHMD’s major business is in regulators and its clientele includes the likes of Lucas-TVS, Macurex, Multi-Link and Koastal NTTF.

The challenges in the electronics sector not only are material based but involves manpower as well. "However, KHMD has built up a team over the last 10 years and by providing them with an attractive work atmosphere and remunerations, we have been able to retain them.Our attrition rate is less than one percent," says Dwarakadasa.

Given that the focus is on the luxury sector and high-end cars, going forward electronics is only likely to become more mainstream and more necessary.

According to Dwarakadasa, the government has in recent times taken several initiatives to encourage the electronics sector with the establishment of electronic clusters. Just over a year ago, the Cabinet approved the proposal to offer financial support for the development of such clusters as these can help the growth of the electronics systems design and manufacturing (ESDM) sector, drive innovation and catalyse the economic growth by generating jobs.

KHMD operates in the aerospace and other applications as well in addition to the automotive which have been impacted by the slowdown in the auto sector. Given this, the company is also looking at entering into the aftermarket for its regular product range, which would help balance out the dip in the OE market. As a player, KHMD has always looked at niche applications and this will continue to be its focus area.