Advik Hi-Tech, which operates primarily in the two-wheeler segment, tied up with FMO Technologies in 2009 and earlier this year, renewed it. 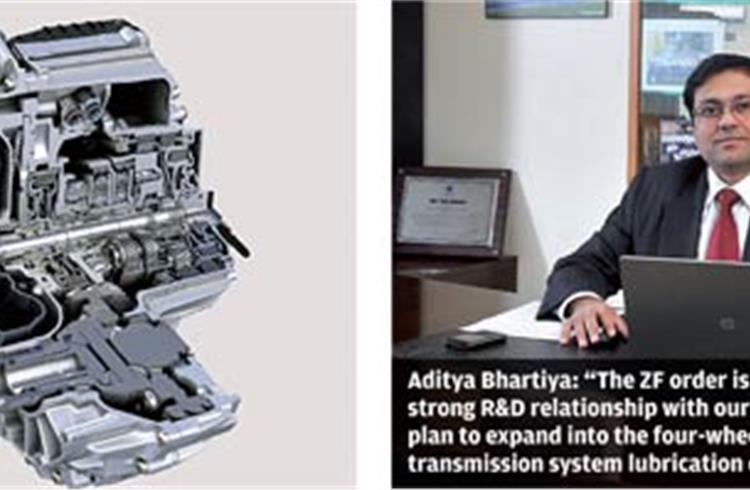 As part of the order, Advik will design, develop and manufacture transmission oil pumps for nine-speed transmission systems. These pumps incorporate a new design of the GE rotors currently being developed by the company’s R&D team along with its German technology partner, FMO Technologies. It will submit samples to ZF by March 2013 and, if approved, mass production is expected to begin by the last quarter of 2013.

Advik Hi-Tech, which operates primarily in the two-wheeler segment, tied up with FMO Technologies in 2009 and earlier this year, renewed it. The partnership, which is part of a 20-year technical collaboration, brings in the capabilities of designing, developing and producing the oil pumps for passenger cars and commercial vehicles.

“The order from ZF is an endorsement of our strong R&D relationship with our German partners. Going forward, we plan to enlarge the collaboration and expand into the four-wheeler segment and the transmission system lubrication oil pumps category,” says Aditya Bhartiya, managing director, Advik Group.

Advik Hi-Tech’s products for applications in the two-wheeler segment come under five different verticals. It began manufacturing chain tensioners in 2000 for four-stroke motorcycles and now makes nine million units per year. “We are the world’s second largest manufacturer of chain tensioners for four-stroke bikes and scooters and world’s largest oil pump makers for two-wheelers with a global share of around 20 percent. We supply oil pumps for close to 75 percent of all Ducati bikes rolled out,” says Bhartiya. According to him, the global two-wheeler market size is 55 million units while the company churns out 10.5 million two-wheeler oil pump assemblies against the annual capacity of 12 million units.

As a part of a completely separate vertical, Advik is a partner with Honda Motorcycle & Scooters India (HMSI) to make ‘combi-brake systems’ (CBS) where the systems are designed by the OEM. “We make 1.5 million units of the CBS per year, around 5,200 units everyday at our Manesar, Gurgaon facility,” says Rakesh Yadav, vice-president, marketing, Advik Hi-Tech.

Bhartiya believes that the OEM-supplier equation is now moving towards a partnership model where both work together from design and development to the final production stage for more result oriented goals. “The reason why the OEMs have started involving the Tier 1 component makers from the design stage to the pilot production stage is that they have realised the advantages of working together. If OEMs do collaborative engineering with component makers, we can probably cut down three to seven percent of product costs,” explains Bhartiya. “There is also a shift towards effective design. If two component companies make a similar product, then more or less, the cost of manufacturing will be the same. The only effective difference could be made at the design stage,” he adds.

Bhartiya believes that it is never too late to enter into the passenger car segment as India is primarily a small car market. He remarks that the numbers will grow to 10-15 million units in the coming decade and will not cannibalise two-wheeler growth as there is enough scope for parallel growth of the two segments. “There are 100 million two-wheelers on the road and 1.2 billion people without even a motorcycle, who will graduate to becoming two-wheeler customers in future,” says Bhartiya.

He explains that with the mother technology of making an oil pump remaining the same across all segments, it is just the design and size changes which lead to different capabilities. However, he says, Advik is also mulling breaking into new verticals and products. “We are looking at emission norms which will come into play by 2015-17. We are trying to identify the new products with the right tech. We don’t want to invest into a product which has a two-to-three-year lifespan as it won’t secure long-term growth.”

Advik has been growing at a CAGR of 35 percent YoY. However, company officials anticipate growth of 12-14 percent in 2012-13 due to the higher base and the market slowdown.To fuel growth in 2013-14, it is exploring expansion options in Chakan, Pune and consolidating R&D further with an aim to cater to passenger cars.

Announcing a plant near Bangalore recently, it plans to start operations by February-March 2013 under phase 1 while phase 2 plans include expansion. The plant will exclusively cater to HMSI’s upcoming Karnataka plant. “We have earmarked an investment of around Rs 100 crore for expansion in three years which will include the new Bangalore plant and Chakan,” reveals Bhartiya. With increased volumes next year and the Bangalore unit going on stream, he targets 20-25 percent growth in 2013-14. He also anticipates that

the state governments should chalk out tax-related benefits and other sops for Tier 1 component makers since it will provide a boost to employment and investment opportunities.