An initial investment of Rs 20 crore will be made on the warehouse infrastructure with localisation of parts to be taken up in phases once the assembly facility is established. 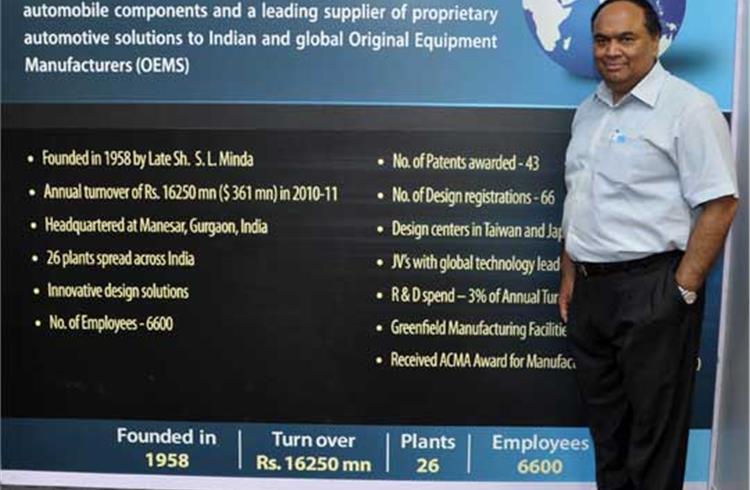 The UNO Minda-NK Minda Group has plans to enter the Brazilian market as a trading entity, initially with a warehouse facility. This will be followed by an assembly unit in the port city of Manaus to ensure just-in-time supplies to two-wheeler makers in the region. Later, it will kick off backward integration as volumes pick up from local OEMs.

An initial investment of Rs 20 crore will be made on the warehouse infrastructure with localisation of parts to be taken up in phases once the assembly facility is established. N K Minda, Group chairman, told Autocar Professional that Brazil is a tough market with interest rates and salaries three times higher than India. But with all global vehicle manufacturers increasing their presence in BRIC countries and increasing new model launches, component manufacturers have to follow the vehicle makers in all geographies if they want to be competitive.

Initially, some part production of switches is planned in Brazil in which the Minda Group leads globally. That will be followed by horns and lighting products. An order has already been received for switches from Japanese two-wheeler maker Yamaha for its Brazilian model while discussions are still underway with Honda for its global motorcycle model. Supplies will commence from the Minda warehouse by the beginning of next year. The company is targeting a topline of Rs 100 crore to accrue from these two orders in Brazil over the next four years. However, before the supplies commence in Brazil to Honda, the Minda Group will be supplying high-end switches albeit in small volumes to the OEM in the Japanese market.

The Group believes in having its footprint in every market with famous global models, whether two wheels or four wheels, either alone or through some local alliance. This will facilitate bids for global RFQs which are otherwise difficult to come by. Honda and Yamaha will be Minda Group’s first customers in Brazil but with other Indian players also headed to that market like Bajaj Auto, TVS Motor Co and Hero MotoCorp, there are ample opportunities in store for the component maker.

A plan is also being firmed up for supplying to various carmakers in Brazil and it is expected that lighting products, switches, horns and immobilisers could be likely candidates for it once it is implemented.

In the next phase of growth, the UNO Minda Group will look at another happening area, South Africa where it currently undertakes trading activities and will start looking at a more active role in that geography next year onwards. But for the present, Brazil is far ahead in terms of market opportunities with a mixed vehicle market.

With every global car manufacturer keen to tap South Africa, which is a promising market for four-wheelers, the country is expected to become an important automotive destination. It is believed that for Indians, compared to the Japanese, it will be easier to gain access to this region as they have a connect with the large base of local Indian settlers there.

However, growth is not restricted to the BRIC countries. Indonesia is steadily gaining in importance and, according to a recent study, it is slated to be among the top 10 markets in the ASEAN region. Hence, it has now become imperative for Indian partmakers to be present in that location as well as to cater to the growing mix of OEMs in that Asian country.

UNO Minda has a headstart in Indonesia with a manufacturing facility set up through an equal partnership with the Ashok Minda Group under the entity of PT Minda ASEAN Company for switches. Since July this year, it also assembles lighting lamps to meet the demand of vehicle manufacturers there. The company has won a bagful of orders from both the two-wheeler and four- wheeler OEMs in Indonesia. One pertains to supply of lighting lamps for Nissan, both for its requirements in India and Indonesia, for the B-segment sub-Micra model that is expected to be first rolled out in India by January 2014 and later brought to Indonesia by mid-2014.

Three types of lighting lamps will be supplied for the Nissan sub-Micra model based on the V platform -- rear lamps, fog lamps and high-mounted stop lamps. The model is expected to target the Wagon R and Hyundai i10 models in India.

Besides, Yamaha is a major customer for the Minda Group in Indonesia along with Kawasaki and Daihatsu. Early next year, supplies of tail-lamps and cabin lamps worth an annual Rs 5 crore will also start for the new model of Suzuki in Indonesia, which is based on the Wagon R and will be launched by mid-2013 in that market.

The manufacturing operations at Indonesia are supported by the design and development centre at Taiwan which provides tooling expertise. In the initial phase, PT MindaASEAN will make tail-lamps, fog lamps and small and interior lamps for four-wheelers and headlamps, LEDs, tail-lamps and blinkers for two-wheelers from the Indonesian facility.

The JV company is also expecting a big order from Toyota for its new Innova which will be launched in India, in Q1CY 2014. In Indonesia, it will be rolled out six months earlier with different stylings for lighting.

Minda says that lighting technology is morphing very fast. New trends include roof lighting with microphones that can connect to the mobile phone as well as map lamps and other features. Tail-lamps are also shifting to the more powerful LEDs.

LED technology is, however, still expensive in India and comes mostly in the high-end cars in the D and E segments. The part maker is currently working on reducing LED costs for the B and B-plus segments as part of its new product lineup.

So will the company look at the inorganic route to expand its girth globally and for tapping new technologies? Well, yes, that seems to be very much on the horizon. The UNO Minda Group is looking at good design companies to acquire technologies besides targeting engineering and R&D houses. “We are in discussions with some of the independent R&D houses in Europe but are in no hurry unless there is an 80 percent indication of a turnaround of that entity,” explains Minda.

He cites examples of Indian parts makers having gone the M&A path in terms of manufacturing but facing integration problems. Unless there can be a value addition and reduction in cost, turnaround of the acquired organisation becomes very difficult. Consequently, out of most of the M&As done in the Indian auto component sector, so far only 10 percent have proved to be successful in terms of profitability. So the Minda Group is careful to assess the opportunities before grabbing them.

At home, the Minda Group has entered into various new product lines in the last year and a half, like infotainment, alloy wheels, air cleaners and filtration systems. The Group’s collaborators in these lines are suppliers of Japanese manufacturers like Suzuki, Honda, Toyota and Nissan, so Minda has been able to leverage this link to its advantage.

But as its business orders shore up, it is facing capacity constraints in various product streams that has necessitated new greenfield facilities in different locales. An investment of Rs 700 crore is in the pipeline for it to be spread across the next two years with funding through the internal accrual and debt route. For instance, a new plant is planned at Sanand in Gujarat for Ford, Maruti and Tata Motors. The Group has applied for 20 acres of land for setting up facilities for switches and lighting initially, which will be followed by a new plant for alloy wheels in the second phase. Construction is expected to start next year.

Meanwhile, a new plant is coming up near Narsapuram, in Karnataka, to support HMSI with aluminium die casting parts, switches and horns, and another one in Chennai for lighting products for Nissan. It already has a switch facility for four-wheelers there and its new plant for alloy wheels recently went on stream with exports commencing for Honda Japan. Another facility is also underway at Bawal under the recently inked joint venture with Fujitsu Ten for car infotainment products. Minda will also be a supplier for filtration products like air cleaners for the Brio-based diesel saloon of Honda Cars India which will be launched in 2013-14.

UNO Minda is next looking at a new growth line which will be electrical motors for electric vehicles, with the Union government set to roll out incentives for this segment under its National Mission for EVs and Hybrid vehicles. At present, these motors are imported but a feasibility study is underway and the Group may look at entering into a technical licence for acquiring technology for it. With the growing market for electronics in cars, motors can also be leveraged for operating power windows, air-conditioning systems, mirrors and other equipment in the cars offering a huge growth potential for it.

So it is clear that the Delhi-NCR component makers are on an overdrive to expand capacities in order to meet the growth in the automotive sector, going forward.

The UNO Minda Group has set a target of achieving a topline of Rs 10,000 crore by 2016-17, up from the Rs 3,000 crore this year of which 25 percent will accrue from its overseas business. At present foreign revenue accounts for 17 percent of the total business.