The new chip designed for BMW will go into a device that hooks together five to six cameras placed around the car and provides a 360deg panoramic view to a driver of what is happening, all on a single console. 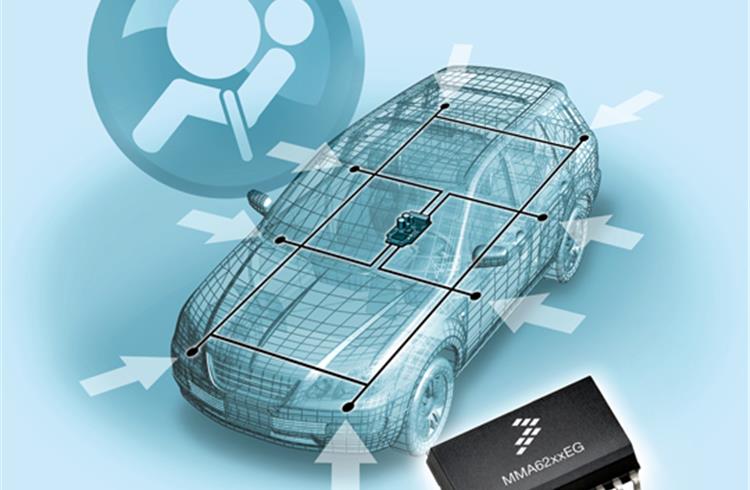 Freescale Semiconductors India’s design centre at Noida, near New Delhi, has developed a new chip for active safety applications for BMW AG. The company has sent early samples to the German luxury carmaker which is testing them currently on prototypes.

This is the kind of cutting-edge work that takes place at the India Design Centre which makes 50 percent of the new chips for automotive applications, says Vivek Tyagi, country head (marketing and sales), Freescale Semiconductor India.

The new chip designed for BMW will go into a device that hooks together five to six cameras placed around the car and provides a 360deg panoramic view to a driver of what is happening, all on a single console.

The fact that the project was awarded to India speaks volumes for the centre’s important capabilities which include system on chip (SoC) integration where Noida is a recognised excellence centre. It took a year to develop the first samples and the project will go on for two years, explains Tyagi.

Apart from active safety systems, another focus area for Freescale is car infotainment systems. While car manufacturing has slowed down in Europe, OEs are focusing on the ‘wired car’, an area of high growth that the company is keen to tap. “We are seeing growth estimated at 20 percent CAGR in infotainment in the industry as a whole,” avers Tyagi. And while the industry is still nascent in India, the future promises a lot.

Active safety is an upcoming trend in which electronic systems monitor the driver, and take over and slow down the car in case of any perceived danger. Freescale worldwide has provided samples of its products to global Tier 1 suppliers.

In sync with top OEMs

Nearer home, Freescale India is working with several top names in the industry. One is Hero MotoCorp which, after its split from Honda in December 2010, has been focusing on R&D in a big way. “We are talking to them and their suppliers as our products are supplied to them by vendors.” Freescale globally works with Honda in Japan through Keihin, which is a customer. Clearly, the two-wheeler sector holds huge promise for Freescale. The segment is most advanced here, says Tyagi. "While China has more volume and is largely electric, India is petrol-driven and our work is unique in that sense," he adds.

Indeed, Tyagi says that Freescale is working on 20 good live projects at the moment. The company is working with Tata and Harman, the latter engaged on a special car infotainment project for a Tata vehicle. Freescale has worked on the Nano where its low-cost micro-controller is being supplied for the car via the Tier 1 supplier, Delphi.

But the most interesting engagement, by far, for Freescale would be with the Aurangabad-based Varroc Group. Varroc has been in the news recently for its takeover of Visteon’s lighting business globally, a big step forward for the company.

As a vendor, Varroc has been moving from mechanicals to electrical and to electronics for its range of products that include two-wheeler ignition systems and instrument clusters. While Freescale has worked historically with the company, it is now keen to offer special Europe-designed chips for lighting applications to Varroc.

Freescale says that given that Varroc made a global acquisition, it has products like the e-switch which uses a semi-conductor that replaces mechanical switches and relays. These state-of-the art products are right-sized, weigh less, use less wiring harness and improve reliability. In case of overheating, it would shut down the system and once cooled, get them back on. Freescale’s engagement has begun and this will be another piece to the business it does with Varroc.

As far as Tata-Harman goes, Freescale is in talks – always through vendors – for chip design. Overall, its engagement with Tata is for speedometers and instrument clusters for the Nano and this project, if obtained, will deepen its involvement in auto electronics.

While Freescale’s business has largely focused on cars and two-wheelers, in the CV segment, the company has worked with Automotive Infotronics, the joint venture between Continental AG and Ashok Leyland. The engagement began over a year or so and the products have yet to be launched. The products are largely concerned with body electronics, an emerging area in the Indian auto electronics scenario.

Meanwhile, to showcase its active safety systems and the new product designed for BMW, Freescale will host a two-day technology day on August 23 and 24 in Bangalore.

Freescale is also looking at car battery management systems. There is a need for intelligent battery monitoring, an area which is new in India and worldwide but which will have huge implications for hybrids which is where a lot of action is ongoing. In hybrids, battery life is crucial and thus this is a challenging area in the coming five to 10 years.

In India, some work on such a project has begun and is likely to debut in a product on a high-end car in the near future.

The company is also in touch with Maruti Suzuki and its Indian vendors, working on several areas including body electronics. Freescale has worked on the Swift diesel cars which source their ECUs from Magneti Marelli.

In the world of auto electronics, companies like Freescale typically work with the Tier 1 supplier to the OE. In the case of Tata Motors, it is that rare instance where a company deals direct with the OE but then Tata has its own in-house electronics set-up. The key players in the auto electronics space from which OEs source their chips include the likes of Bosch, Visteon, Delphi and Continental. Among the leading Indian players is Coimbatore-based Pricol with whom Freescale works closely with.

According to Tyagi, the emerging trend in India is that OEs are beefing up their R&D capabilities and this is good for Freescale. Globally Freescale has done work on what is called IGBT (insulated gate bipolar transistor) which are high-power transistors.

Other than supplying to scores of conventional fuel cars, Freescale has also supplied electronics that make even green cars run smarter. The Chevrolet Volt, GM’s plug-in hybrid electric vehicle, houses a good number of Freescale chips inside that govern everything from the dashboard instrument panel to the electronic motor and the small petrol-powered engine.