Movers and shakers in the Indian two-wheeler industry

As the Indian two-wheeler industry rides towards record numbers in FY2018, here's a close look at who's on top and who's down in the market share game.

The industry news on two-, four and more wheels is good. SIAM's recently released February 2018 and cumulative 11-month sales data for the April 2017 to February 2018 period reveals the sector is in good nick and poised to announced record sales numbers for the fiscal year 2017-18.

While the passenger vehicle segment will drive past the 3-million mark with ease, it is the two-wheelers, which are riding at full throttle, that are set to achieve the 20-million landmark milestone in the domestic market by the end of March.

The overall growth has seen major players of the likes of Honda Motorcycle & Scooter India (HMSI) increase their market share from the earlier 27.21 percent, prevalent between April-February 2017, to 29.04 percent during the same period in FY2018 with cumulative sales of 5,357,907 units. Other key gainers have been Suzuki Motorcycle India, which sold 454,355 units, growing its market share from 1.95 percent to 2.46 percent, and Royal Enfield, which marginally grew market share from 3.68 percent to 3.94 percent, selling 727,020 units between April-February 2018.

Given the robust double-digit growth, fuelled by both scooters (+21.18%) and motorcycles (+12.66%), expect the two-wheeler sector to confidently even surpass industry body SIAM’s expectations, which had viewed the segment to be growing at around 12 percent in the fiscal.

Out of the two product categories, clearly, it is the scooters which have been ruling the roost of the two-wheeler segment in the recent times. While scooters sold a total of 6,201,896 units between April-February 2018, motorcycles, on the other hand, still have their upper hand in volume contribution with sales of 11,468,020 units over the same period.

A scooter for everyone
A closer look into the vehicle sub-segments shows that with their ease of riding and acceptance across all age groups and gender, scooters have been the most in-demand and hot-selling of the entire two-wheeler lot.

With total sales of 3,556,517 units, HMSI maintains its stranglehold on the scooter market, maintaining a consistent share of 57.35 percent between April-February 2018 (April-February 2017: 57.34%). The Honda Activa range continues to charm the Indian population, with the company also introducing the updated 100cc Activa 5G at the 2018 Auto Expo, bringing in a few aesthetic tweaks to an otherwise fundamentally strong package. Its 125cc Grazia, launched in November 2017, has quickly become a new favourite with young buyers, showing an accelerated performance and selling over 50,000 units within just three months of launch until January 2018.

Another Japanese player, Suzuki Motorcycle India saw the second-generation of its 125cc Access scooter which was introduced in July 2017, continue its popularity streak and help the company significantly enhance its market share from 4.91 percent to 6.20 percent, cumulatively selling 384,250 units between April-February 2018 across all its scooter offerings.

Meanwhile, homegrown TVS Motor Co also strengthened its market hold from 14.53 percent to 16.14 percent, selling 1,000,801 units over the 11-month period in the fiscal. While the Jupiter remains the star model for the company, TVS has also recently introduced a 125cc offering, the NTorq, which boasts edgy styling and contemporary features like a Bluetooth-enabled digital speedometer console.

On the other hand, with serious aggression from the competition, the country’s largest two-wheeler maker, Hero MotoCorp saw its scooter market share decline from 14.07 percent to 12.98 percent between April-February 2018, with total sales of 804,878 units.

With slow sales of its Ray scooter series, India Yamaha Motor too declined from 7.73 percent to 6.19 percent between April-February 2018.

Motorcycle for the long commute
While it didn’t spear a strong attack in the scooter space, Hero MotoCorp continues to maintain its reign in the motorcycle category, selling 5,872,966 units between April-February 2018 and improving its market share in the category from 50.86 percent to 51.21 percent during the period. The growth is on the back of strong sales of its commuter offerings, the Splendor and the Passion series, with either being reinforced with the introduction of the 110cc Passion Pro, Passion XPro and the 125cc Super Splendor, in the month of December.

HMSI, which is the overall No 2 two-wheeler player in the country, also saw its market share increasing from 14.26 percent to 15.71 percent, with cumulative motorcycle sales of 1,801,390 units between April-February 2018. While the company’s entry-level Dream series and the 125cc Shine offerings are the key volume drivers, Honda is also looking to regain its lost territory in the above 150cc space and introduced its 160cc XBlade in the country at the Auto Expo.

A strong player in the mid-size motorcycle space, Royal Enfield has been consistently trudging on a growth path, with its Classic series having carved a distinct slot for itself in the market. The company sold 727,020 motorcycles between April-February 2018 and increased its market share from 5.82 percent to 6.34 percent. It also recently introduced two new iterations, the 350X and the 500X of its Thunderbird tourer, which are targeted at the young buyer with their new scheme of colours and factory-fitted alloy wheels, a first in the company’s history.

While homegrown Bajaj Auto de-grew its market share from 18.17 percent to 15.83 percent, selling 1,815,590 units, TVS Motor, on the other hand, is on a roll and sold a total of 828,392 motorcycles, notably increasing its market share from 6.96 percent to 7.22 percent. The company is strongly aiming the future and had launched the much awaited TVS Apache RR310, developed in conjunction with BMW, in December. The well-priced motorcycle has created a spur in the segment, promising solid engineering and performance.

With a slew of new product launches lined-up for CY2018, the game in the two-wheeler space is only going to become fiercer and exciting in the times to come. Watch out this space for more action. 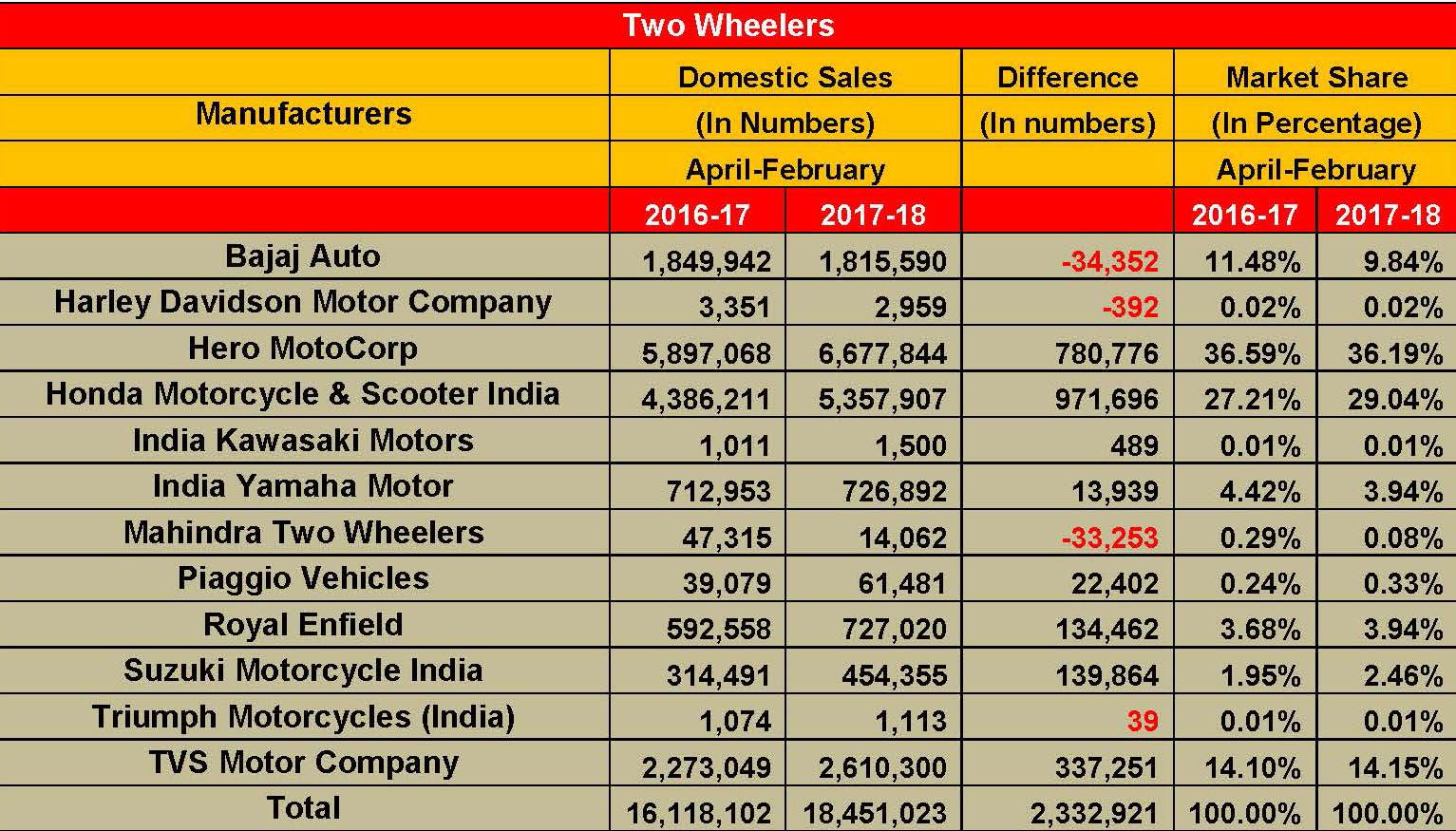 Winners and losers in the SUV market share game

Exclusive: TVS Motor sells a million scooters in India for first time ever in a fiscal