UVs lead the charge in April

Sales across vehicle segments have seen a smart uptick in April 2016, with demand for utility vehicles surging. 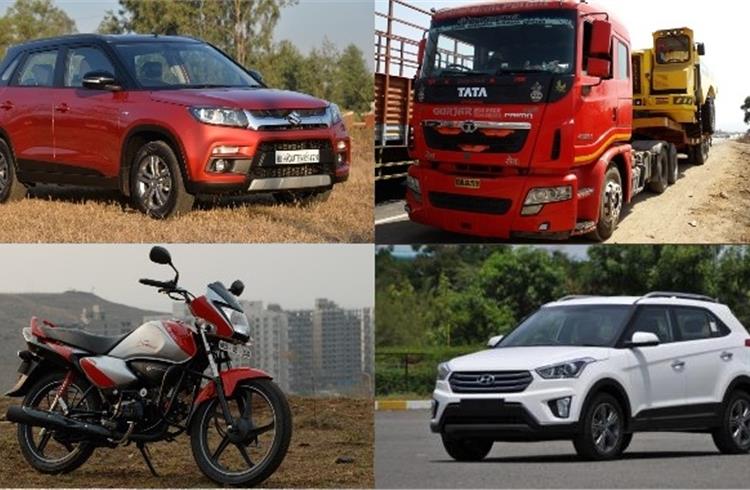 The Indian automobile industry is off to a good start in fiscal 2016-17. While sales figures revealed independently by vehicle manufacturers were indicative of good cumulative numbers, official data released by apex industry body, the Society of Indian Automobile Manufacturers (SIAM) reveals a strong overall performance.

While the beginning of the marriage season during April boosted two-wheeler sales, an improvement in the overall urban market sentiments aided the automotive industry to solid domestic sales of 1,900,879 units across segments and a handsome 20.04% growth over April 2015.  Importantly, all vehicle segments are in positive territory.

The frontrunner is the utility vehicle segment with a year-on-year growth of 42.83%, scooters with 35.86 % and passenger carriers in the three-wheeler segment at 44.69%.

Speaking to Autocar Professional, Vishnu Mathur, director-general of SIAM, said: “The difference between the sedan and the small SUV has blurred with the launch of new models like the Maruti Vitara Brezza, Hyundai Creta and the Mahindra KUV 100, which are seeing swift sales and driving the utility vehicle market.” Consumer demand for small cars is gradually getting replaced by small SUVs as the volume churners with their multi-faceted capabilities.

However, optimistic as it sounds, the sales growth during April 2016 is nowhere close to the peak levels of 2012 as it is on a low base. Moreover, considering that growth in rural markets is yet to pick up, the growth is coming mostly from the cities and urban areas. This has helped improve market sentiments and set the industry on a recovery phase.

SIAM has already projected that recovery in the rural markets and higher urban incomes during the current fiscal as the domestic economy improves will boost commuter bike sales which have considerably reduced in the past 18 months.

The Seventh Pay Commission’s announcement of wage hikes would give a further leg-up to consumer spending impacting positively passenger vehicle sales across the country. This is also expected to fuel the replacement demand of five-year-old cars.

Three-wheelers would get a boost with rising urbanisation and migration to cities boosting intra-city transportation. In addition, three-wheeler OEMs are pushing into rural areas as small commercial vehicles try to encroach on traditional three-wheeler markets. 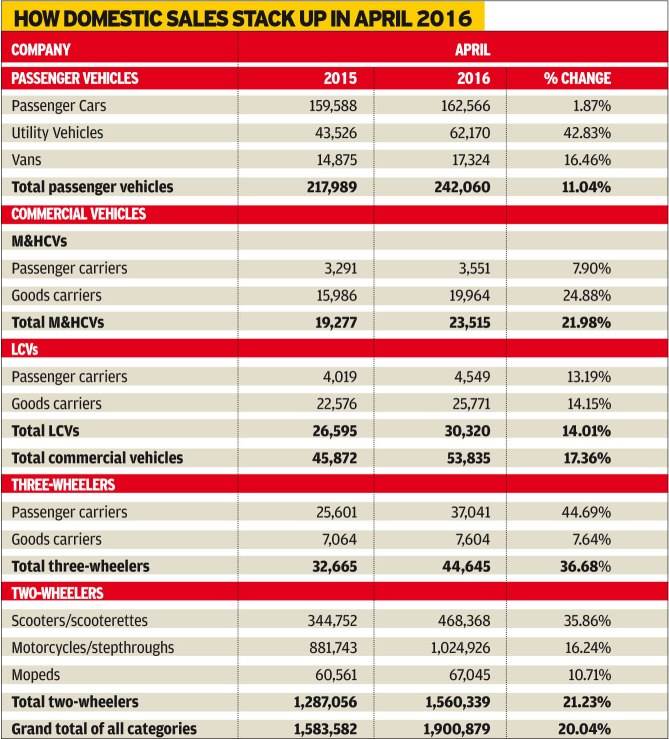 While domestic sales have brought a smile to most OEMs, exports continued to be disappointing during April 2016 with overall numbers declining by 15.87% due to slow growth in some overseas markets. While passenger vehicles registered a growth of 6.61%, CVs, three-wheelers and two-wheelers were down by 2.68%, 61.86% and 10.80% over the same period in 2015.

“LATAM and African markets, which are our key export markets, have been down, for instance Nigeria and Algeria. People in these countries have less money in their hands as oil export prices have declined worldwide. In LATAM there is a pressure on the currency and inflation rates is also very high,” elaborates Mathur.

A reprieve could come about considering that oil prices have bottomed out and Africa exports should see some improvement going forward. But LATAM will prove to be a bigger challenge. Also, exports to Europe are slowing down while the US and Japan account for almost miniscule numbers. Hence there is a growing need to tap new markets. It’s likely South East Asian geographies and neighbouring countries could offer new opportunities.