Vitara Brezza and Creta cream the surging wave of demand for SUVs but the big news is of the Mahindra Bolero returning to the Top 10 list after 23 months. 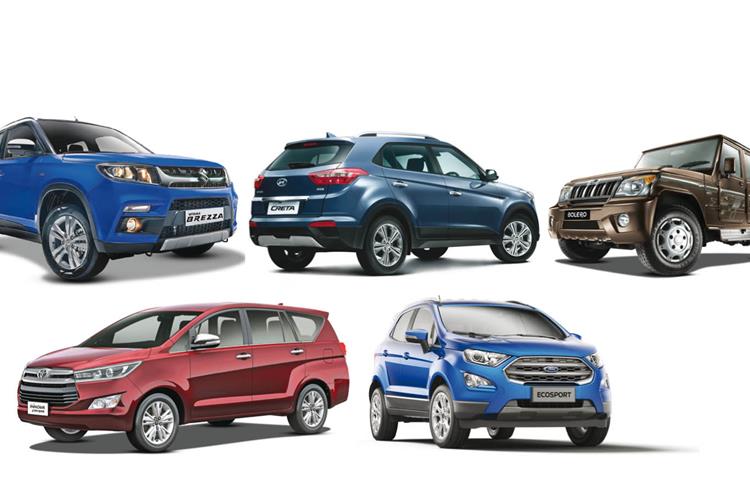 Like scooters, every OEM worth its salt wants to be in the SUV game, keen to ride the surging demand in India for this vehicle type. In February, the UV segment contributed to 29 percent of the total PV sales in the month, which stood at 275,329 units in the domestic market.

Compact crossovers are increasingly becoming the new consumer favourites and these mini-SUVs  have changed the fortunes of some OEMs in India. While Honda Cars India sold 54,473 UVs between April-February 2018, it is the WR-V, launched in March 2017, which has worked wonders for the company, helping it double its UV market share to 6.56 percent in the same 11-month period (April-February 2017: 3.17%). FCA India, a UV-only player, registered cumulative sales of 17,186 UVs in India between April-February 2018, but, the compact Jeep Compass, which was launched in August 2017, actually catapulted it to secure a 2 percent market share in the UV space during the period, also enabling the company make a firm ground for itself in the highly challenging Indian market.

In line with global trends, compact SUVs with their smart dimensions for city manoeuvring and spacious enough for the weekend getaway, are hugely popular and are gradually diminishing the thin line between passenger cars and UVs within the PV space.

Compared to sales a year ago, the top four UVS have maintained their positions albeit numbers are up marginally over January 2018, except for the the EcoSport. Also, the Maruti Ertiga which was No. 5 in February 2017 has been edged out of the Top 5 list.

Maruti’s Vitara Brezza maintains its lead in the compact crossover space, registering sales of 11,620 units (February 2017: 10,046) and growing 15.66 percent year on year. In January 2018, it had sold 11,785 units. The highly popular compact SUV is majorly driving the carmaker’s market hold in the UV segment, which has grown to 27.82 percent between April-February 2018 from the year-ago’s 25.93 percent, with the company’s total UV sales clocking at 230,995 units during the 11-month period.

The Hyundai Creta continues its No. 2 position and has been a consistent performer with sales of 9,278 units, registering a growth of 3.06 percent (February 2017: 9,002). Compared to January 2018 which saw sales of 9,284 units, growth is slower than expected. The Creta nevertheless is nearing its big milestone and is set to drive past the 100,000-unit sales mark this fiscal.

With this, the Mahindra Bolero has made a comeback in the Top 10 best-selling PV list after 23 months. It narrowly missed out in January 2018. Speaking to Autocar India, Veejay Ram Nakra, head - Marketing & Sales, M&M, said, “The Bolero has garnered strong demand in the pst six months after we put in place a comprehensive strategy for Tier 2, 3 and 4 cities and also rural markets”.

The Toyota Innova Crysta zeroes in at the No 4 position, maintaining flat sales of 6,127 units (February 2017: 6,054). With a host of premium features like leather upholstery and top-notch safety kit including seven airbags in its top-trim, the Innova Crysta is quickly gaining traction with individual buyers, just as it is a hit with fleet operators.

Bringing up the rear at No. 5 is the Ford EcoSport which seems to have secured its position in the Top 5 list, with the refreshed model garnering good numbers for the company. The crossover sold 5,438 units in February 2018, growing 19.22 percent (February 2017: 4,561). Month on month though, the EcoSport is charging ahead. The updated crossover has cumulatively sold 16,406 units since its introduction in November 2017 and Ford had brought in a new 1.5-litre three-cylinder petrol motor along with the option of a six-speed automatic transmission in the refreshed version, also arming the crossover with a touch-screen infotainment system to tackle competition.

The UV segment is certainly the most buzzing space right now, so much so that even new entrants including the likes of Kia Motors and MG Motor India are well decided to start their Indian innings with a compact crossover offering. With a slew of new model introductions in the near horizon, UVs are expected to continue their surge into the future. Watch this space as we bring more action.