With demand for SUVs continuing to surge and helping save the blushes for the overall PV sector,  sales could jet off into a new trajectory in 2020 with a glut of new models to come. 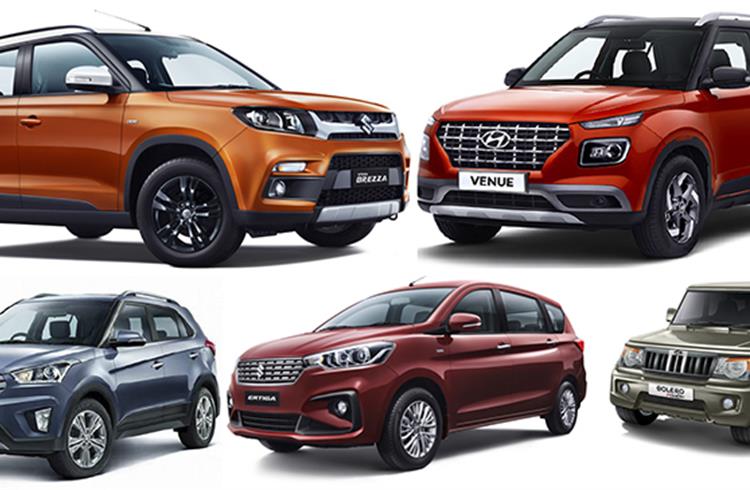 Of all the sub-segments in the passenger vehicle (PV) segments, the utility vehicle segment is riding a wave of surging demand. In fact, in December, it notched 30% year-on-year growth to clock sales of 85,252 units and contributed all of 36% to total PV sales of 235,786 (-1.24%).

Vitara Brezza notches best monthly YTD sales
The Maruti Vitara Brezza is back on top, two months after it lost its crown to the hard-charging Kia Seltos in October 2019. With strong sales of 13,658 units in December 2019, the Brezza is fighting back and how. Felled by new competition, first in the form of the Hyundai Venue in September and then the Kia Seltos in October and November, the Brezza remains under pressure in the marketplace.

The lack of a petrol engine amidst the growing consumer shift from diesel to petrol has impacted the Vitara Brezza adversely over the past year. Nonetheless, the SUV recorded a total of 12,033 units in November 2019, which was its best monthly number in the fiscal year until December, followed by 11,785 units in April.

In the April-December 2019 period, the Vitara Brezza has sold a total of 88,128 units, accounting for 48% of Maruti Suzuki's total UV sales of 184,330 during the nine-month period. Having decided to stop making diesel vehicles from FY2021 onwards, Maruti Suzuki is readying a new model. It has begun road testing the refreshed Vitara Brezza, and will take the wraps off the refreshed model on February 6 – the second day of the 2020 Auto Expo, which starts on February 5. The updated Vitara Brezzawill see cosmetic tweaks, inside and out, as part of its mid-cycle facelift. The reveal will come exactly four years from the model's world premiere at Auto Expo 2016, in New Delhi.

Earlier this month, the Maruti Vitara Brezza drove past the half-a-million units – 500,000 units – sales milestone in the domestic market, a story broken by Autocar Professional. Cumulative sales of the game-changing SUV, launched on March 8, 2016, now total 508,673 units till end-December 2019, 46 months since launch.

Hyundai Venue at No. 2
With the Seltos moving out of the Top 5 chart for the first time in five months due to sales of just 4,645 units, and the Brezza notching improved sales, the Hyundai Venue, the UV leader in September, and the No. 3 in November, takes second place in December with 9,521 units, just 144 units less than the 9,665 units in November, its best monthly performance in this fiscal yet.

From its launch on May 21 till end-November, Hyundai's first compact SUV has sold a total of 70,443 units comprising 27,953 diesel and 42,490 petrol variants, which makes for a 40:60 percent ratio and indicative of the consumer preference for petrol power in the domestic market. The Venue comes with three engine options – a 90hp, 1.4-litre diesel, an 83hp, 1.2-litre naturally aspirated petrol unit, and a 120hp, 1.0-litre turbocharged unit.

In the April-December 2019 period, Hyundai has sold a total of 139,165 UVs, which means the Venue with 70,443 units accounts for 50% of that total. The company says it has around 75,000 bookings for the Venue, which means this is one model which will continue to be in the news.

Once a longstanding No. 2 below the Brezza, demand for the Hyundai Creta has been impacted by newcomers like the Kia Seltos and sibling Hyundai Venue. With sales / despatches of 6,684 units in November, the Creta takes fifth place in the monthly Top 5. While this performance is sharply down on October's 8,576 units, it is better than September's 6,641 units, August's 6,001 units and July's 6,585 units.

7,337 units, October's 7,197 units, slightly more than September's 6,284 units but less than the 8,391 units in August. The Ertiga in its new avatar is seeing decent demand. With its modern design, ample space, thoughtful features and a value-for-money package, the new Ertiga is ticking most of the right boxes for family and fleet buyers.

In mid-December 2019, Maruti announced that since the launch of the first-generation of the Ertiga eight years ago, it has sold over 500,000 units of the MPV in India. The first-gen model had arrived back in 2012 and then in 2018, the second-gen model was launched. Over the years, the Ertiga has carved out a space for itself in our market as a model that consistently performs well on the sales charts.

Mahindra Bolero back in action
The Mahindra Bolero is back in the Top 5 UV chart after quite a hiatus but the warhorse that it is has sold 5,661 units, comprising 4,658 for the Bolero and 1,003 for the Bolero Plus last month, indicating that there is indeed quite a fan following for this rugged SUV. In the April-December 2019 period, the Bolero has sold a total of 38,041 units, down 26% year on year. Is Mahindra working on a new variant to rev up numbers?