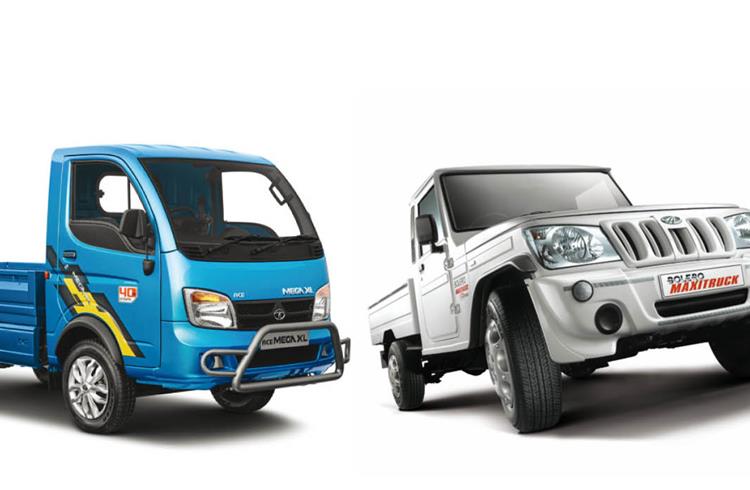 Even as the overall commercial vehicle industry is headed for a bumper year in 2017-18 and set to drive past all-time high of 2011-12 with consummate ease, there is a pitched battle underway in one of the key segments – light commercial vehicles (LCVs).

While Tata Motors with sales of 183,229 units (+31%) has emerged as the largest player in the overall LCV segment, M&M with sales of 182,121 units (+20%), is hot on Tata’s heels. Together, these two OEMs control 81 percent of the overall LCV market. The other key players include Ashok Leyland, Force Motors, VE Commercial Vehicles and SML Isuzu.

The real action though is in the goods carrier LCV sub-segment, which is all about last-mile transportation given the growing constraints of big trucks entering metro/city limits, where OEMs are looking to make headway.

Tata Motors, which is the clear market leader in M&HCV goods carriers with a 51.23 percent share, has a strong competitor in Mahindra & Mahindra in LCV goods carriers. M&M edged out Tata Motors in this segment in 2016 but Tata is fighting back. For the April-February 2018 period, both companies have clocked double-digit growth, as a result of which the LCV segment is speedily driving towards its all-time high.

The two arch rivals are fighting it out for market share. While leader M&M’s market share has dropped to 43.61 percent from 46.47 percent, Tata Motors has increased its share to 41.29 percent from 39.63 percent.

Pickup segment sees intense competition
As mentioned before, in the overall LCV segment, the goods carrier segment accounts  for the lion’s share as demand for last-mile connectivity and transportation in rural India increases rapidly. It is in this segment that M&M has an edge with its popular pickup range of trucks.

Tata Motors is taking on the market leader with a clutch of new products and the promise of better aftersales service. The company sold 49,595 units for a market share of 21 percent, gaining 3 percent compared to the year-ago period. With products like the Super Ace, the 207 and the new Xenon Yodha, Tata has gained market share but from the looks of it, the company is game to further accelerate its offensive. 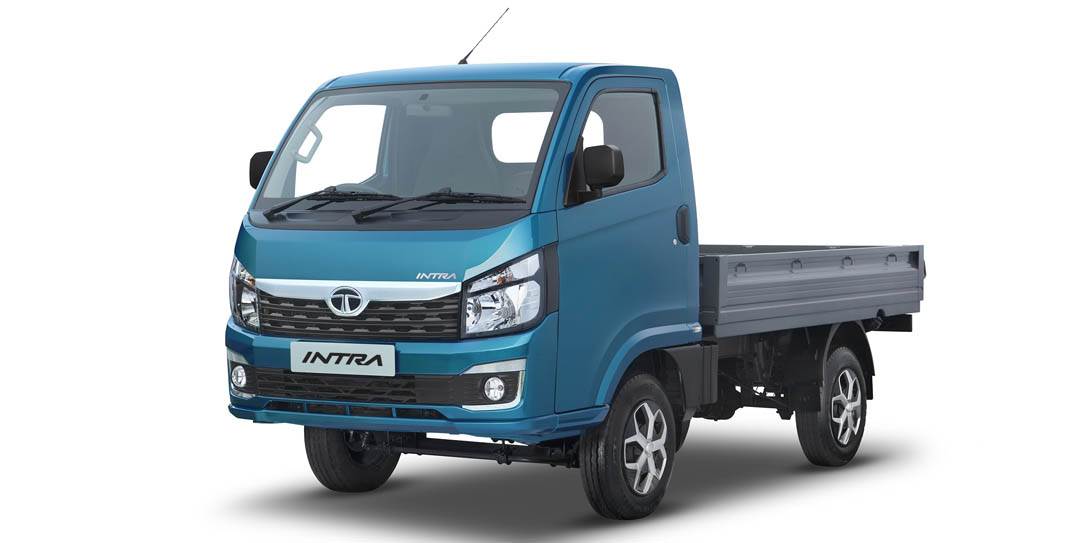 In February 2018 at the Auto Expo, Tata Motors showcased its new Intra LCV platform, which reveals the company’s intent to expand its SCV product portfolio. In fact, it is likely to introduce a product on this new platform in FY19.

Ashok Leyland is another ambitious player, eyeing greater volumes in the segments. The Chennai-based manufacturer, which sells the Dost LCV in this segment, has expanded its range with the Dost+ and already chalked out a plan to further increase its LCV portfolio. Between April-February 2018, Ashok Leyland sold 36,351 units of the Dost and Dost+ for a market share of 15 percent, it has managed to gain market share in the category. In the coming months, expect both Tata Motors and Ashok Leyland to come up with new products and strategies to achieve better traction in this segment but M&M at present has a comfortable lead.

Tata Motors leads the 2T mini truck segment
Where M&M doesn’t have a lead is the 2-tonne mini-truck segment, the largest category in the LCV goods carrier segment. Tata Motors has managed to hold on its leadership position and over 67 percent market share thanks to continuing demand for the Ace range of small trucks. In April-February 2017-18, the company sold 97,681 units, registering YoY growth of 32 percent.

Maruti Suzuki, which entered the SCV market in September 2016 with its Super Carry, has grabbed nearly 6% market share in the 2T mini-truck segment by selling 8,621 units in April-January 2018.

M&M, which is the second largest player with a market share of 25 percent, is doing its best to wrest new market share in the segment and sold 36,351 units in the 11-month period under view. Interestingly, Maruti Suzuki which entered the CV market in September 2016 with its Super Carry SCV, has grabbed nearly 6 percent market share in the 2T mini-truck segment by selling 8,621 units. It appears that the company is slowly but steadily looking to expanding its presence in the segment by entering new markets across the country.

Tata Motors also dominates in the 3.5-6T category with 70 percent market where the company is sells its popular 407 range of trucks. M&M, which retails the Load King and CRX range, has a market share of 12 percent.

Force Motors scores high in passenger carriers
The passenger carrier segment, which accounts for a smaller chunk of the overall LCV segment, is where Pune-based Force Motors has a stranglehold. Force Motors maintains its leadership with a range of products including the Cruiser, Citiline, Traveller and Toofan and in the April-February 2018 period sold 17,365 units to have a market share of 42.51 percent. The others in the fray in this segment are Tata Motors, VE Commercial Vehicles, SML Isuzu and M&M with market shares of 32, 12, 7 and 5.55 percent respectively.

Future outlook
Going forward, and with the CV market booming, expect both Tata Motors and M&M to come with aggressive growth strategies to corner higher market share in the growing LCV goods carrier segments. This will be by not just offering better products but more of a value proposition to the customer in this segment, most of whom are vehicle owners themselves.

Meanwhile, Ashok Leyland has also revealed an intent to dig deeper into this segment with a new product offensive in the LCV segment. Similarly, with its initial success with the Super Carry, Maruti Suzuki India will also want to up the ante in the 2T mini-truck segment albeit the carmaker will be more driven by the surging demand in the SUV market.

Clearly, the battle in the LCV goods carrier segment will continue to be a hard-fought one, and will also draw new entrants. Stay tuned for further updates. 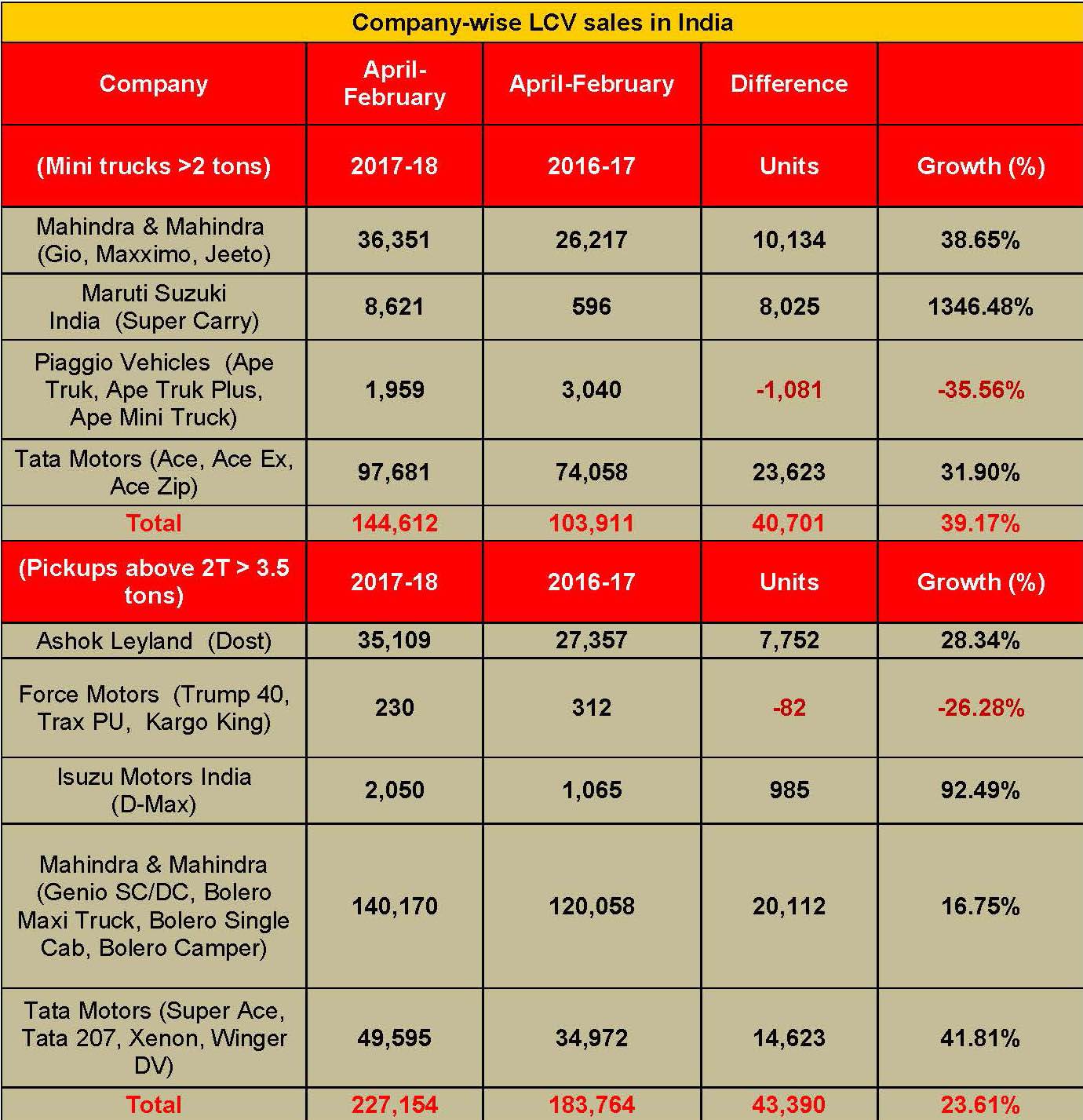