Amidst all the red ink that lies splattered across the two-wheeler industry, this is one company which is firmly bucking the slowdown: Suzuki Motorcycles India. 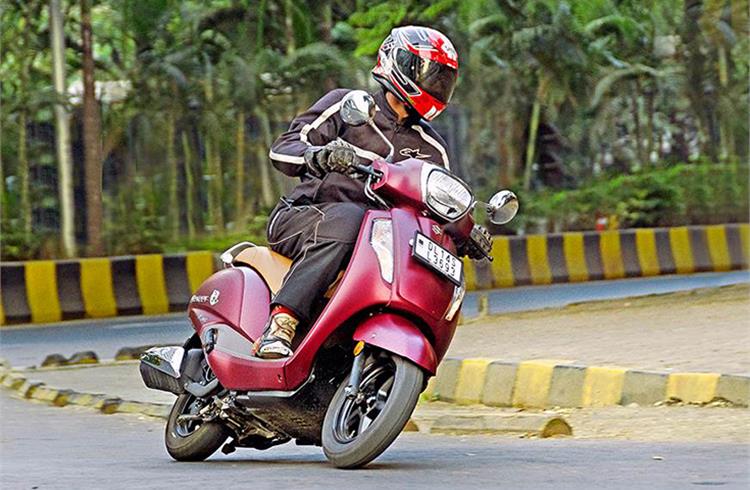 Amidst all the red ink that lies splattered across the domestic market sales numbers of the Indian two-wheeler industry due to a multiplicity of growth-impacting issues, there is one company which is firmly bucking the slowdown: Suzuki Motorcycle India.

For the first 11 months of the current fiscal year, India Auto Inc is in dire straits. Total vehicle sales at 20,498,128 units are down 15.85% year on year. All vehicle segments and sub-segments, except Utility Vehicles and M&HCV buses, are in the red due to a multiplicity of factors including the prolonged economic slowdown, the transition to BS VI products and the resultant price increase.

The two-wheeler segment, the most affordable form of motoring in the country, is also badly impacted at 16,550,770 units, which constitutes a sharp 16.15% decline.

Suzuki sole player among 13 OEMs to record growth
Look at the sales and market share details below and you can see the extent of the hit two-wheeler OEMs have taken in the past 11 months. But narrow down your search to Suzuki and you will see that it is the sole company amongst 13 two-wheeler OEMs to record growth. With sales of 651,293 units in the April 2019-February 2020 period, Suzuki has not only recorded growth but also increased its two-wheeler market share to nearly 4%. 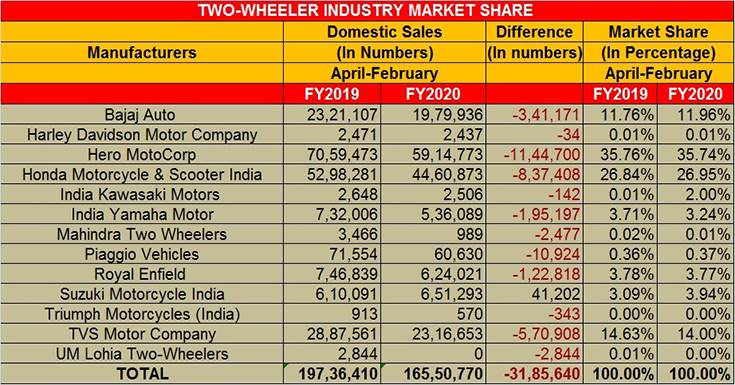 Clearly, a standout performance by the two-wheeler arm of the Japanese four-wheeler major. What has given Suzuki the charge is the handsome performance of its scooter portfolio, led by the Suzuki Access 125. If only its motorcycles had the same appeal to consumers as the scooters, then Suzuki would have fared even better.

With scooters (615,898 units) accounting for 94.56% of Suzuki's overall two-wheeler sales, the Access 125 is clearly the game-changing product for the company and has helped Suzuki increase its scooter market share to 11.61% from 8.83% a year ago. All the six other scooter makers (Bajaj Auto has just entered the fray with its Chetak), have shown negative sales. In terms of market share, Suzuki has gone ahead of Hero MotoCorp (7.08%) and is now third in the pecking order, after leader Honda Motorcycle & Scooter India (56.64%) and TVS Motor Co (18.61%)

Suzuki’s scooter sales have contributed 11.61% to overall scooter industry sales in April-February 2020, up from 8.82% a year ago, indicating the growth of the company in this sector.

Access 125 powers Suzuki’s growth
The Access 125 has turned out to be a game-changer for the company. This popular buy and Suzuki's best-selling scooter seems to be closing the gap with the Jupiter and is a consistent No. 3, after the Activa and Jupiter. On January 6, the company launched the BS VI-compliant version, with prices starting from Rs 64,800 for the drum CBS and going up to Rs 69,500 for the disc CBS Special Edition. In the transition to stricter BS VI emission norms, the scooter has switched its fuelling system from a carburettor to fuel injection. In terms of output, the upgraded Access 125 will produce 8.7hp at 6,750rpm and 10Nm of torque at 5,500rpm. The power output remains unchanged as compared to the BS IV engines. However, torque figures have dropped (albeit marginally) by 0.2Nm.

It's a fortnight to go when the clock turns to BS VI only. Suzuki, like other OEMs, will be hoping that the tide gradually turns and consumers return to showrooms, the slowed economy notwithstanding.