Growing demand for made-in-India vehicle on two-, three- and four-wheels spells good news for an industry hit by downturn in the domestic market. 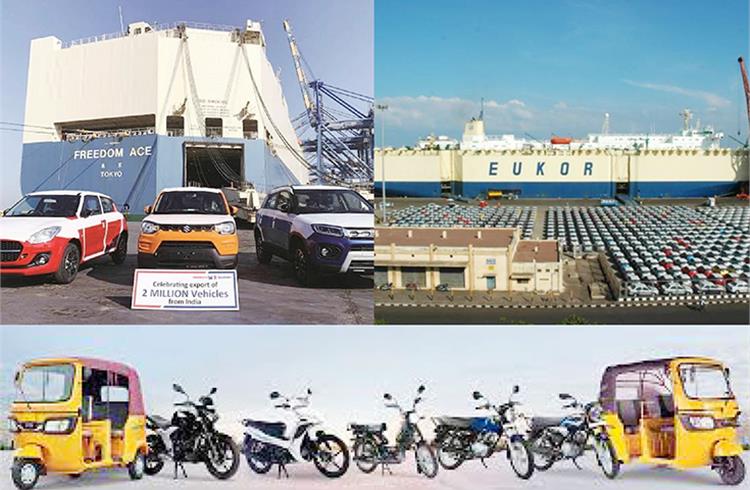 It’s been a difficult year for India Auto Inc, faced as it is with multiple challenges – be it the ongoing chip shortage, rising commodity prices, high fuel prices and resultant lacklustre consumer demand. Captains of industry were hopeful that November with Diwali would bring in the sales but their hopes were belied. Apex industry body SIAM released wholesales numbers for November and April-November and there’s ample red ink splattered across all vehicle segments.

Look at the segment-wise data table above and it’s amply clear that there’s reason for cheer for Made-in-India products when it comes to shipping them overseas. Total export sales of 36,91,583 units are a strong 62% YoY growth. Importantly, each segment has delivered in spades. PVs at 368,605 units are up 58%, two-wheelers with nearly 3 million units have notched 64% growth and three-wheelers, with 343,139 units, are up 47 percent. And Bajaj Auto’s quadricycles too are contributing their bit with 137% growth. Let’s take a closer look segment-wise.

Maruti Suzuki takes big lead, records best exports yet
Eight months into the fiscal year, Maruti Suzuki India has firmed up its grip on the export market. With despatches of 145,906 units, it has posted 192% YoY growth and accounts for 40% of total PV exports. In the process, and with four months of the fiscal year still left, the carmaker has already recorded its best annual exports – see data table below 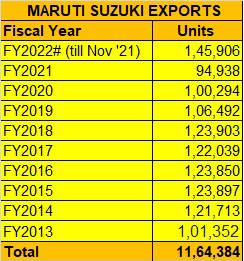 What’s remarkable about this performance is that despite witnessing tough times in the domestic market, mainly due to shortage of electronic components and chips, the carmaker has focused on delivering overseas shipments, catering to demand.

Expect the Baleno, S-Presso, Dzire, Swift, Vitara Brezza and Jimny to be top six models for the carmaker on the export demand front.

Ford India, which has pulled out of the domestic India market but is continuing export operations, despatched 18,022 vehicles from Chennai Port. Its main export product was, as always the EcoSport SUV with 15,382 units, down 35% YoY. It is the sole OEM to be in negative territory. 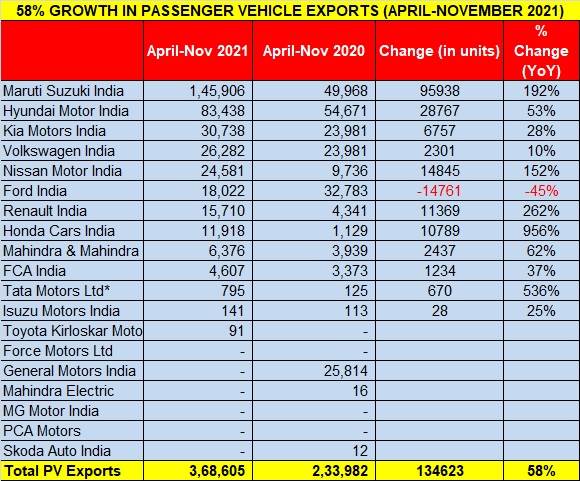 Bajaj the big boss of two-wheeler exports
The two-wheeler industry, which is witnessing slackened demand in the domestic market particularly for entry level products, is firing on all cylinders in the export market. Its performance in April-November is indicative of that – 29,75,952 units, up 64% YoY (April-November 2020: 18,09,58).

Bajaj Auto, which has always being strong on export, maintains its firm grip with shipments of 14,84,605 units (up 45%) and accounting for 50% of total two-wheeler exports.

TVS Motor Co, India’s No. 2 exporter, registered a robust performance with 724,777 units (up 82%) and accounts for 24.35% of total exports. Bajaj Auto and TVS together command nearly 75% of India’s overall two-wheeler exports.

The big positive for the Indian two-wheeler industry is that export demand is driven across all the key players. While Honda Motorcycle & Scooter India (HMSI), which exported 237,028 units, has doubled its export performance, Hero MotoCorp despatched 197,337 units, posting 102% YoY growth. The export sales table below depicts the growth story, which can only get better. 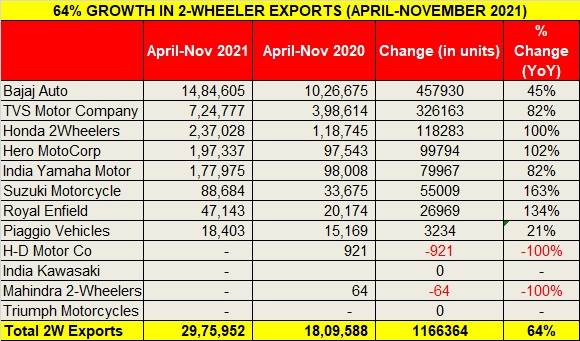 Bajaj and TVS also power three-wheeler exports
The three-wheeler industry is also making the best of the export demand coming its way. With total shipments of 343,139 units in the first eight months of FY2022, growth has been a solid 47% year on year.

All said and done, the export mantra per se remains a winner: not only is it a high-margin revenue earner but it keeps the manufacturing plant buzzing even in difficult times in the domestic market.