Consolidated sales of the top 10 bestselling scooters in January 2016 indicate that there has been a mild growth of 6.85 percent YoY. 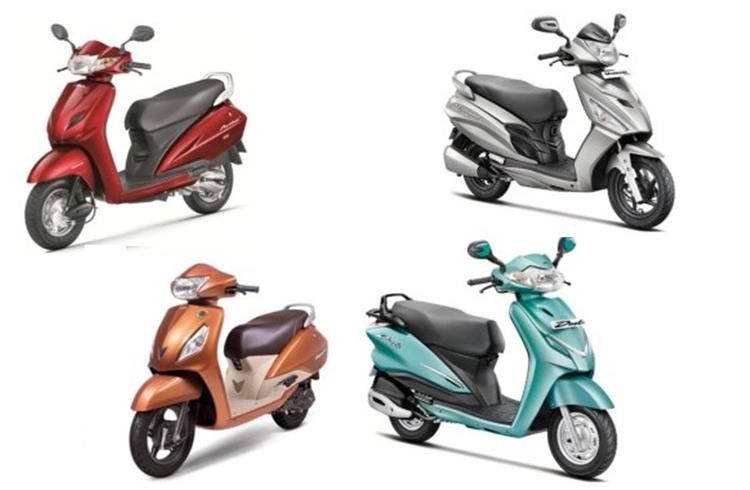 Family scooters are clearly witnessing rising demand. The top 4 bestselling scooters for January 2016 are all family scooter models that comprise the Honda Activa, Hero Maestro and Duet and the TVS Jupiter.

The Honda Activa continues with its unbeaten run of being the top-selling scooter brand. For January this year, it has also become the largest selling two-wheeler in the local markets.

Hero MotoCorp, which claims to have increased its share in the scooter market from 14 percent to 21 percent after launching the Maestro Edge and Duet models last year, has seen consolidating sales for both the models. While the Maestro fetched sales of 48,002 units and held the position of second bestselling scooter brand for the month, moving higher up in the order to number four, the Duet too, recorded decent monthly sales of 24,239 units.

TVS Motors’ popular Jupiter ranked third in the bestselling scooters’ list recording sales of 42,838 units, up by 29 percent YoY. The Jupiter had sold 33,228 units in January 2015. 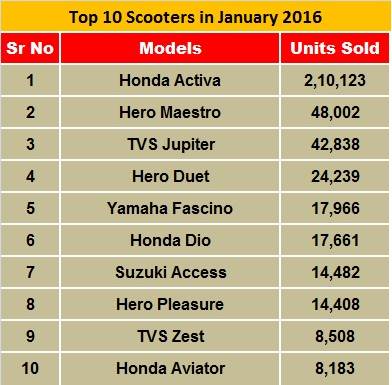 From the fifth position onwards, it can be seen that barring Suzuki Access, all the other bestselling scooters are positioned for niche customers. For example, the Yamaha Fascino is positioned as a fashion statement for urban commuters, Honda Dio targets young male riders, and Hero Pleasure and TVS Scooty Zest eye young female customers.

Having said that, it is understood that the two-wheeler OEMs are also eyeing these growing sub- segments within the parent scooter market.

Yamaha’s bestselling scooter model, the 113cc Fascino stood at fifth spot with sales of 17,966 units. Honda’s Dio, on the other hand, sold 17,661 units during the month and held the sixth spot. The Dio had sold 18,237 units in January last year.

Suzuki’s family scooter model Access, an age-old rival to the Honda Activa, has ranked seventh with sales of 14,482 units in January 2016. The Access brand, which has been witnessing declining sales over time, is soon expected to see corrections in its numbers. The Suzuki Access had sold 19,865 units in January 2015.

The scooter will now also come with an easy start system, a first of its kind in the Suzuki range of scooters. The new Access is also given a design boost in terms of chrome finish, 3D emblem logo and edgy lines. While the model will be available in an optional front disc brake and alloy wheels as well, the company plans to bring it in April later this year.

Hero’s 102cc Pleasure scooter ranked eighth in the list with sales of 14,408 units during the said month. Meanwhile, TVS’ 110cc Zest and Honda’s 110cc Aviator stood ninth and tenth in the list with registering sales of 8,508 units and 8,183 units respectively.