While Activa and Jupiter sales continue to accelerate, the Suzuki Access 125 comes into its own with sales of 39,061, its best yet this fiscal year. 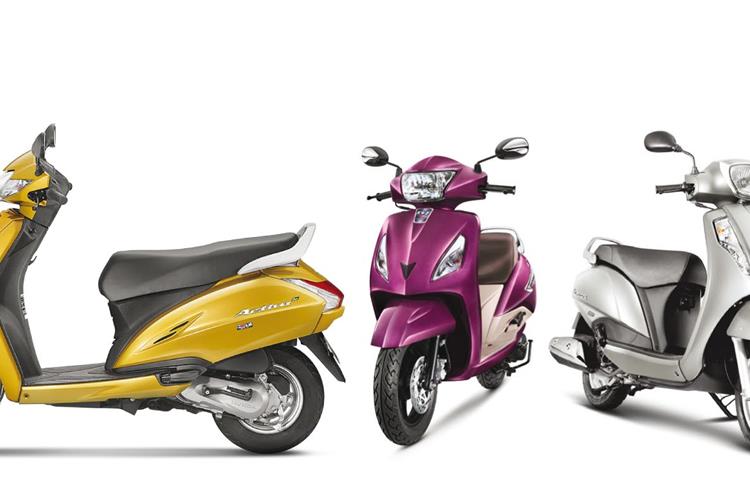 The Top 10 best-selling scooters are indicative of the surging consumer demand for specific models. As in January 2018, HMSI sees three of its models – Activa, Dio and Grazia – contributing to over 55 percent of the total scooter sales in February.

The ubiquitous Honda Activa remains head and shoulders above the competition and last month it sold 247,377 units, which makes it 8,834 units a day from over 5,500 dealer outlets across the country. The company has beefed up the Activa range, launching the fifth-generation model at the Auto Expo priced at Rs 52,460 for the STD variant and Rs 54,325 for the DLX variant (both prices, ex-showroom Delhi).

The Activa 5G gets an LED headlamp, two new colours, and a few other updates. The STD variant of the 5G is priced at Rs 1,000 more than the Activa 4G which currently retails for Rs 51,460 (ex-showroom Delhi). The 5G DLX variant comes with a digi-analogue instrument cluster that gets Eco and service-due indicator lights. Both variants also feature a new front hook to carry small bags, and a tougher metal muffler protector. Like its more premium sibling, the Grazia, the Activa 5G also features a seat-opening switch that is positioned next to the ignition.

The consistent No. 2 best-seller is the 110cc TVS Jupiter which went home to 63,534 buyers last month. What the Actva is to Honda, the Jupiter is to TVS. In fact, it is the single biggest contributor to scooter sales for TVS, which has registered sales of more than one million scooters (1,000,801) in India during the first 11 months of the ongoing financial year 2017-18, growing its scooter market share to 16.14 percent. Of this, the Jupiter contributed 745,608, just 4,392 units shy of the 750,000 mark – and 74.50 percent of the company’s scooter sales in the fiscal year till now.

Just about a month ago, the company entered the blossoming 125cc segment with the tech-laden NTorq 125 priced rather aggressively at Rs 58,750 (ex-showroom, Delhi). Between April-January 2018, the company has cumulatively sold 909,746 units and has seen its market share increase from 14.52 percent to 16.13 percent in the scooter segment.

Suzuki’s Access 125 takes fourth place, up from fifth in January, with sales of 39,061 units, which is a significant number for the model, which has created its image of being one of the most reliable and trusted products in the market. In fact, February sales are the Access' best yet in this fiscal.

Hero MotoCorp’s 110cc Maestro takes the middleweight position – No 5 – position with the scooter selling a total of 35,165 units and recording 8.46 percent year-on-year basis, when sales in February 2017 stood at 32,421 units.

Launched in November 2017, the Honda Grazia, another 125cc offering from HMSI, has not taken much time to make its way into the Top 10 list, riding straight in November 2017. HMSI has positioned the Grazia as a premium, feature-rich product, and liked by many for its overall styling and comfort. The Grazia sold 23,620 units in February to rank No 6, similar to January and has cumulatively sold over 75,000 units since launch.

Now with March coming to an end, it will be interesting to see how much headway scooters have made into the two-wheeler market this fiscal and how they are also eating into the motorcycle market. Stay tuned to Autocar Professional for incisive industry analysis and updates.