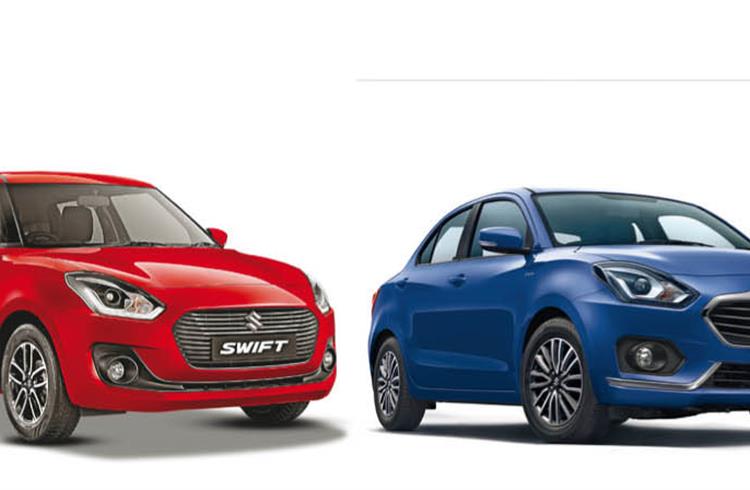 The Indian automobile industry began April from where it ended in March 2018 – on a robust note. Continuing with the strong momentum of FY2018, passenger vehicle – cars, utility vehicles and vans – sales in April 2018 clocked 298,504 units, registering smart 7.50 percent growth.

While the country’s bellwether in the PV segment, Maruti Suzuki India remained the top grosser, selling 163,434 units in the month and posting notable growth of 13.43 percent, its newly launched third-generation Swift hatchback went on to clinch the top spot of the best-selling car in the country, beating even some of the most affordable options in the market.

The new Maruti Swift, which was introduced in February, went home to 22,776 buyers in April, albeit slightly less than the 23,802 units sold in April 2017. The Maruti Swift has been one of the most popular hatchbacks on offer in the country, with the latest avatar of the car further becoming an instant hit with buyers, as a result of its radical design, contemporary features and potent powertrain choices.

At No 2, drives in the Swift’s compact sedan sibling, the Maruti Dzire, which registered cumulative sales of 21,401 units. Launched in May 2017, the third-generation Dzire has been one of the quickest cars to hit the first big milestone, surpassing the 100,000 units mark within just five months of its introduction. The new Dzire offers plenty of space, features and an affordable price tag for the peace of mind ownership that comes assured with this popular Maruti.

The Swift siblings are followed by their smaller cousin Maruti Alto, which lost one place from last year to settle down at the No 3 position and sold 21,233 units (April 2017: 22,549). The entry-level Alto is followed by the premium offering in the hatchback space from Maruti’s stable, the Baleno, which, despite selling 20,412 units, fell one position from last year, and secured the No 4 spot.

At No 5 position, the Maruti Wagon R went home to 16,561 buyers (April 2017: 16,348) and maintained its sales, being one of the much liked tall-boys in the B-segment hatchback space in the country.

The No 6 spot is taken by the Hyundai i20, which sold 12,369 units. While it maintained flat sales which stood at 12,668 units a year-ago, it, however, dropped one position in the tally. The i20, now in its facelifted avatar, gets a slew of exterior updates, including those to its grille, tail-lamps, as well as alloy wheels. On the inside, while it gets refreshes to the touch-screen infotainment system, the car now also comes offered with the option of a CVT-petrol drivetrain.

The No 8 spot gets taken by the Maruti Vitara Brezza, which went home to 10,818 buyers (April 2017: 10,653), down one position from last year. This particular UV offering has been solely responsible for driving Maruti’s UV sales, which cumulatively stood at 20,804 units in the month. Maruti also recently introduced the Brezza facelift, which now comes with a few aesthetic updates, and more importantly, gets an AMT option in its middle VDi and ZDi trims.

While the Top 10 PVs list continues to see the Vitara Brezza and the Hyundai Creta as regular attendees to the party, but, with fuel prices going upwards, the market trend could be seen shifting back to passenger cars, with both the UV representatives slumping one and two positions respectively. Within the PV segment, the passenger car sales stood at 200,183 units in the month, growing at 4.89 percent, much better than what used to be until the end of FY2018, when their growth hovered around 3 percent. Expect fuel efficiency to drive customer choices for some more time in the near future, until there is some relief and the oil gets well again.