The trend of new launches driving sales continued in May 2016 and fresh entrants in the Indian market like the Toyota Innova Crysta and the Maruti Vitara Brezza drove into the Top 10 best-seller list with impressive sales. 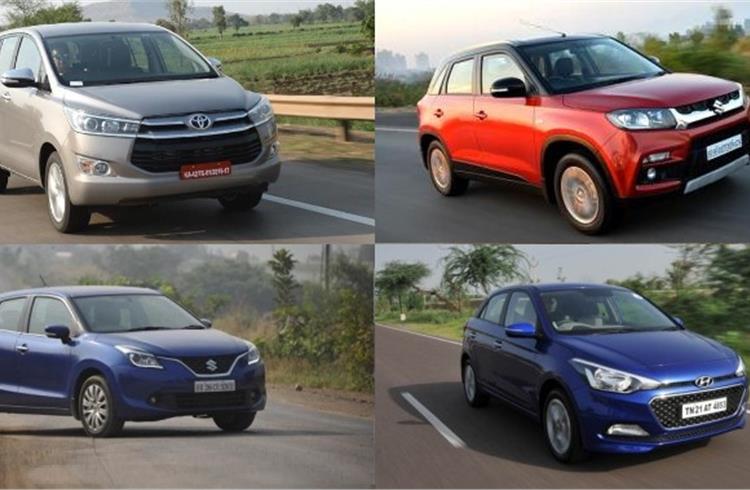 The Passenger Vehicle industry is undergoing a transformation with more customers now keen to buy compact utility vehicles and crossovers, instead of regular hatchbacks. Amidst this shift in demand, overall sales in the segment continued to grow in May at 8.65% (158,996 units), though the rate dipped from 11% (162,556 units) in April 2016.

The trend of new launches driving sales also continued in May and fresh entrants in the Indian market like the Toyota Innova Crysta and the Maruti Vitara Brezza drove into the Top 10 best-seller list with impressive sales.

Overall though, Maruti Suzuki India continued to dominate the list with seven of its models in the top 10 in May, and the quartet of the Alto, Dzire, Wagon R and Swift claiming the top 4 spots on the list.

At the top of the list, Alto sales declined 12% year-on-year (YoY) to 19,874 units. It will be interesting to see how Maruti’s best-seller performs with competition heating up in the segment after the launch of the Datsun Redigo at a very aggressive Rs 2.39 lakh. However, the Alto’s closest current rival Renault Kwid (5,600 units) saw a sharp decline and slipped out of the list in May. 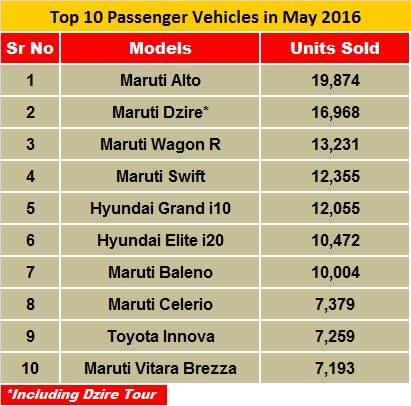 The Dzire (16,968 units) made a comeback, reclaiming the second spot after it was pipped by its hatchback sibling Swift in April, which took the fourth spot in May with 12,355 units. Meanwhile, the old workhorse Wagon R took the third spot (13,231 units).

As usual, Hyundai Motor India with its Grand i10 and Elite i20 hatchbacks captured the fifth and the sixth spots on the list. With nearly 20% growth in May, the Grand i10 (12,055 units) managed to nudge past its elder sibling which sold 10,472 units in the month.

Close on the heels of the i20 was the Baleno (10,004 units), which took the seventh spot on the list. With strong demand for the car in both domestic and international markets, Maruti is ramping up production of the car in order to cut the current waiting period of 4-5 months. The Celerio took the next spot on the list with 7,379 units.

Thanks to an overwhelming response to the recently launched Innova Crysta, Toyota Kirloskar Motor reported a rise in sales in May, after several months of consecutive decline. With more than 20,000 bookings and despatches of 7,259 units in May, the Innova Crysta secured the penultimate spot in the list, beating the likes of other top sellers in the UV space such as the Hyundai Creta (7,057 units).

Meanwhile, last on the Top 10 list was the Vitara Brezza (7,193 units) which also trumped its Hyundai rival to become India’s largest-selling utility vehicle. The compact SUV – Maruti’s first such product – is seeing massive demand and currently has a waiting period of 7-9 months, depending on the variant.