The Livo commuter registered sales of 19,078 units and 19,334 units in November and December months respectively. 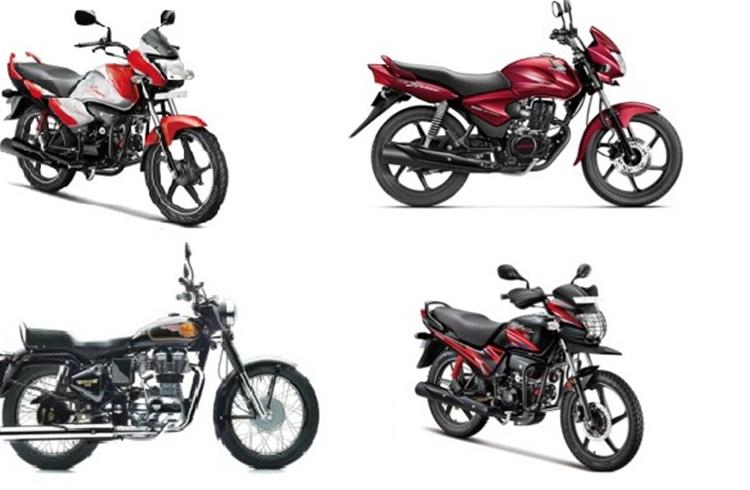 Entering the elite list of India’s Top 10 bestselling motorcycles for the first time is Honda Motorcycle & Scooter India’s (HMSI) mass commuter bike, the Livo. The air-cooled, single-cylinder, 109cc, 8.2bhp city commuter motorcycle has sold 22,762 units in January 2016. The Livo model, which replaced the CB Twister, was launched in July last year as a part of the 15 new products rolled out by HMSI in 2015.

The Livo comes in two variants (drum brake and disc brake) with a starting price tag of 52,989 (ex-showroom, Delhi). Notably, the Livo model has been outselling the three Dream models put together – Dream Yuga, Dream Neo and CD110 Dream – for three months including January 2016.

The model, therefore, has become the bestselling mass commuter motorcycle from the HMSI stable between November 2015 and January 2016 in the ongoing fiscal.  The company has sold a total of 113,287 units of the Livo model since its launch last year, which marks an average of more than 16,000 units per month. The model has seen decent success in the highly competitive mass commuter motorcycle segment, which is dominated by Hero MotoCorp. 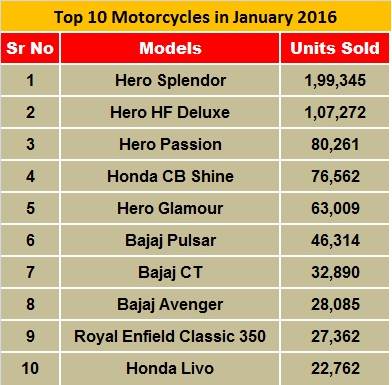 It’s no surprise that Hero’s popular Splendor brand took the top spot in bestselling motorcycles for the month. The brand fetched sales of 199,345 units in January 2016, down by 10.78 percent YoY. The company had sold 223,420 units of the Splendor models in January 2015.

The second and third spots are also sealed by the largest motorcycle manufacturer with its HF Deluxe and Passion brands respectively. The HF Deluxe garnered total sales of 107,272 units, thanks to the fall in the sales of the Passion brand, which accounted for 80,261 units during the month.

The Hero Passion brand, which stood at the second spot in the list in January 2015, had sold 102,343 units in that month. The HF Deluxe, on the other hand, had fetched 94,376 units to the company then and stood at the third spot.

No change in the number four position that is occupied by Honda’s bestselling model in the 125cc category, the CB Shine. The model sold 76,562 units in January 2016 as against total sales of 62,176 units in January 2015. The growth in its sales can be attributed to the addition of a new variant named CB Shine SP, which was rolled out as a part of Honda’s RevFest 2015.

The CB Shine’s rival and the second bestselling 125cc motorcycle in India, Hero’s Glamour ranked fifth in the list with sales of 63,009 units in January 2016.

Notching impressive sales, the sixth, seventh and eighth positions are all occupied by Bajaj Auto’s Pulsar, CT100 and Avenger brands respectively. The well performing brands are a result of the company’s aggressive strategy in the volume game.

The Bajaj Pulsar sold 46,314 units in total across its portfolio of 8 models. The 100cc commuter CT100 and Avenger cruisers saw sales of 32,890 units and 28,085 units respectively during the month.

Notably, after the launch of all-new 150cc Avenger model and the 220cc facelifts, this portfolio has been delivering excellent results for the company.