Mahindra strengthens its grip on the small CV segment

Jeeto proves to be a game-changer for M&M even as the new Supros make an impact in the market. For Tata Motors, the new Ace Mega is bringing in the numbers. 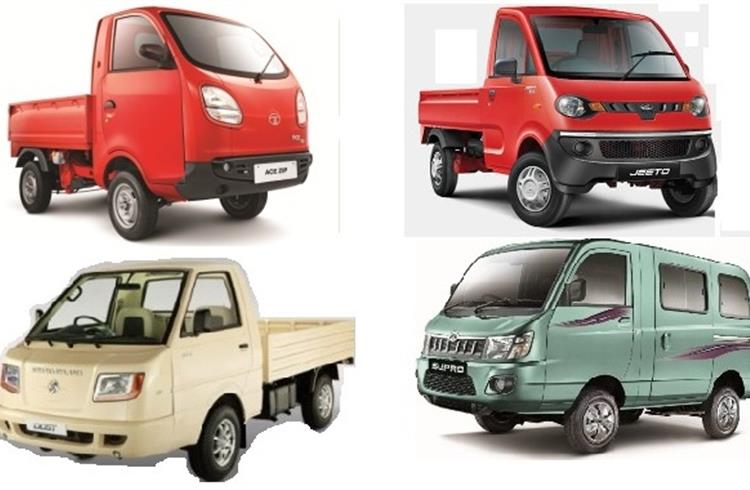 Its focus on new product launches and competitive pricing has paid off, helping the company attain a strong foothold in the goods carrier segment.

In October 2015, M&M launched two new products on the all-new Supro SCM platform – the 8- seater Supro Van and Supro Maxi Truck. Both these products, which are squarely targeted at the market leader Tata Motors’ Ace family of mini trucks, have seen good initial sales as seen in the sales statistics for the last six months of FY2015-16.

Following its commercial launch in October, the Supro sold 765 units in the first month, with numbers dropping in the subsequent months indicating that the new SCV managed to attract buyers but was not able to sustain them.

However, M&M’s mini truck Jeeto has impressed with consistent month-on-month sales of 1,500-2,000 units. After its launch in June, it sold close to 1,600 units and gradually began registering an increase in numbers. Thanks to the Jeeto, M&M’s overall numbers in the 2-tonne mini-truck segment have received a boost. In fact, the Jeeto has overtaken sibling Maxximo and is currently clocking over 2,000 units per month.

Tata Motors, which created the small CV segment many years ago with its Ace, has been the  leader with the majority share. In FY’16, the company sold 84,143 units which gave it a market share of 72%. However, its market share is down from 83.6% to 72% and M&M is the clear gainer. 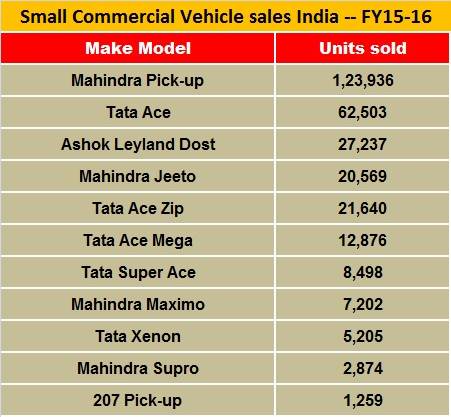 In the 2- to 3.5-tonne pick-up segment, M&M is the clear leader with over 69% market share in the category, thanks to its popular Bolero range of pick-ups. The average monthly sales for the pick-up were 9,000-12,000 units a month and a total of 123,936 units during 2015-16. Earlier this month, the company has launched a larger version of its successful Bolero pick-up truck, called the Big Bolero Pik-up. The new pick-up is targeted at customers who seek extra space in cargo and payload. Designed to cater to the needs of stand operators, businessmen and traders, the Big Bolero Pik-up will be available in 2 variants – offering payload capacities of 1,250kg and the industry-first 1,500kg.

Sensing competition from new players, M&M earlier this year launched the premium pick-up Imperio. The Imperio has been conceptualised and developed in-house by M&M’s engineers at the Mahindra Research Valley in Chennai, a project which saw an investment of Rs 70 crore. Production of the pick-up will be undertaken at the Chakan plant. The automaker may also introduce a CNG variant in the future. The Imperio replaces the Genio pick-up in India.

On its part, Tata Motors has been looking to make new headway in the category with multiple product offerings. With products like the Super Ace, newly launched Ace Mega, Xenon Pick-up and 207 pick-up, Tata sold a total of 27,838 units in the fiscal for a market share of 15.1%. The Ace Mega, launched with the promise of offering more options to customers, has sustained its growth. Starting with 372 units in June, it registered its peak sale of 2,109 units in March 2016 and total sales of 12,876 units in 2015-16. With the Ace Mega, Tata Motors has wrested additional numbers in the pick-up segment and increased its market share by a healthy 31% in FY’16.  Its second prominent product in the category is the Super Ace which recorded total sales of 8,498 units in FY’16. The Xenon pick-up sold a total 5,205 units during the fiscal, ranking third in its product list.

Following the strong recovery in the medium and heavy commercial vehicle segment, after three years of a down cycle, LCV (truck) sales have started showing signs of recovery from H2 FY2016 onwards. Replacement-led buying along with expectations of an uptick in demand from consumption-driven sectors is likely to support demand for LCVs.

Clearly, manufacturers want to cash on this demand and are likely to introduce more products to keep them up in the game. Also in the SCV segment, there is a clear shift in favour of pick-up trucks and OEMs are likely to introduce new models. Maruti Suzuki India and Isuzu Motors India are likely to enter the market this year with India-specific models, making the competition a lot more intense. Stay tuned for updates on this front.