Mahindra Two Wheelers’ (MTWL) first model ever to have entered into the top 10 best-selling two wheelers list across motorcycles and scooters in India is the 110cc Gusto. 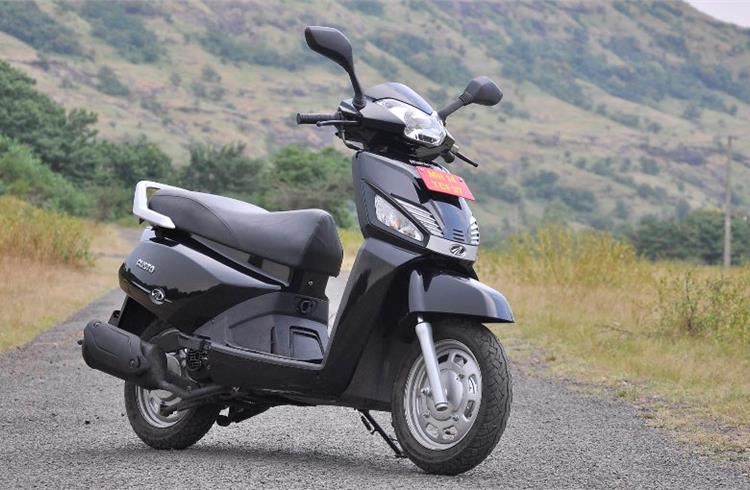 Mahindra Two Wheelers’ (MTWL) first model ever to have entered into the top 10 best-selling scooters list in India is the 110cc Gusto. The scooter model that was launched almost a year ago in a phased manner across different regional markets has sold 9,817 units in September 2015. The Mahindra Gusto ranks 10th in the list of top 10 bestselling scooters for last month.

While this is an achievement for Mahindra’s two-wheeler division, this also highlights that MTWL’s efforts are fetching results to the company on feature-loaded products that offer value for money. The Mahindra Gusto is also the first scooter model that the company claims to have developed indigenously at its Pune-based R&D centre.

Dr Pawan Goenka, executive director, M&M, had said at the launch of the Gusto scooter on September 29, 2014 that "The Gusto is Mahindra’s first ground-up scooter developed entirely in-house. With the Gusto, we are committed to further consolidating our two-wheeler business in India and globally.”

The 110cc Gusto has not only helped MTWL consolidate its scooter portfolio, but has also provided them with a healthy traction in the booming scooter market. The 110cc Gusto, which is recording rising sales volumes month-on-month, had sold 8,441 units in August and 8,367 units in July earlier this year.

In the last two quarters of the ongoing financial year, the scooter has sold 41,681 units that averages close to 7,000 units of sales per month, pointing out stable demand pattern for the Gusto in the market.

It can also be recalled that Autocar Professional, on December 16, 2013, broke the story on Mahindra developing a 110cc scooter to give a fillip to its scooter portfolio in India.

Another notable development in the top 10 bestselling scooters for September 2015 is the fast growing Yamaha Fascino. The stylish model from Yamaha that borrows the same air-cooled, single-cylinder 113cc engine from its existing siblings (Ray, Alpha) has risen to the sixth spot in the top 10 scooters’ list for September. The company reported sales of 16,882 units during the last month.

It is interesting to know that the Yamaha Fascino had ranked seventh in August (sales: 13,478 units) and eighth in July (sales: 10,594 units), which was the month when it had first made its way into the top 10 scooters’ list. Closely tracking the growing sales of the new scooter model from Yamaha, Autocar Professional had reported the same in its monthly sales analysis for both the months.

As the Fascino become the bestselling scooter from the stable of India Yamaha Motor, the model has provided a good stronghold to the company in the burgeoning scooter segment. Thanks to the volumes that this model is fetching for Yamaha, the company has crossed the 60,000-unit sales mark for the second month in a row.

The top four positions in the bestselling scooters’ list remains unchanged with the Honda Activa leading all other models with its insurmountable sales tally of 2,29,382 units for September 2015. While the TVS Jupiter ranked second (Sept’15 sales: 48,886 units), the Hero Maestro (Sept sales: 42,782 units) and Honda Dio (Sept sales: 25,125 units) ranked third and fourth respectively for the last month.

Slipping by two ranks the 125cc Suzuki Access (Sept sales: 12,986 units) ranked seventh for the last month, thanks to the Hero Pleasure that gained some traction and recorded sales of 20,204 units ranking fifth in the top 10 list.

Ray models (Ray and Ray Z) continue to provide stable sales to Yamaha. The Ray models ranked eighth in the list with September sales of 10,767 units.

The Honda Aviator ranked ninth at its sales of 9,909 units for the last month. 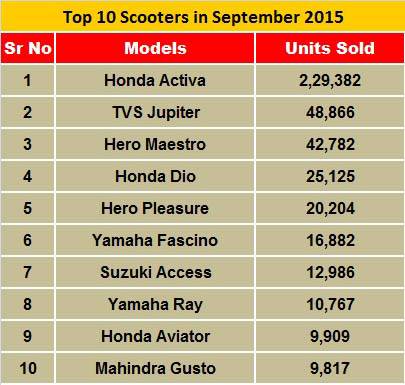 - Two-wheeler sales slow down as buyers remain sombre in September