Honda’s rollout of the 125cc Grazia underlines its intent of consolidating its presence in the 125cc scooter segment, which is expected to soon see new models from Hero MotoCorp and TVS Motor Company. 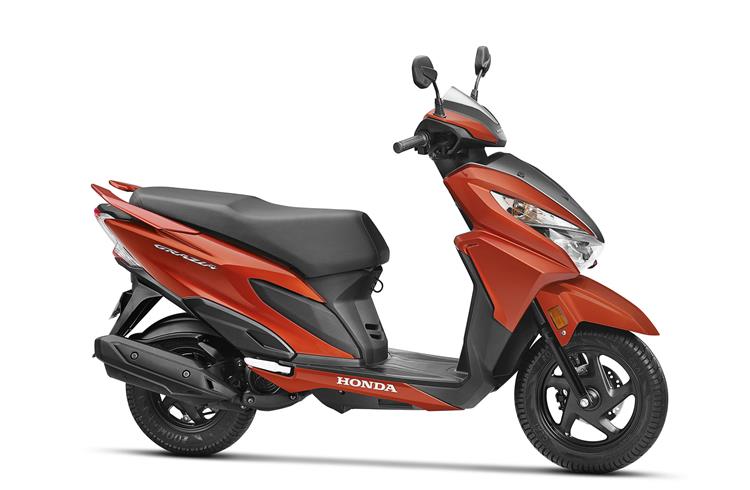 Honda Motorcycle & Scooter India (HMSI)’s latest addition to its expansive scooter portfolio – Honda Grazia – has broken into the list of top-selling scooter models in the domestic market for November.

The Honda Grazia, which is a 125cc scooter targeted at the surging demand for more premium urban scooters, was commercially launched in the first week of November 2017. HMSI had opened the bookings of this model from October 25, 2017.

The Honda Grazia, which has reported sales of 17,047 units in November, sits at the seventh position in the bestselling scooters’ list, which is indisputably topped by Honda’s Activa brand.

Honda’s rollout of the 125cc Grazia underlines its intent of consolidating its presence in the 125cc scooter segment, which is expected to soon see new models from the stables of Hero MotoCorp and TVS Motor Company.

An Autocar Professional analysis of this category points at its fast-expansion, which remains in line with the growing demand for more premium scooters in India's urban markets. The upcoming 125cc scooters are aimed to feed the large-scale demand from the existing 100cc-110cc scooter commuters who are looking for potential upgrade options. Secondly, many first-time scooter buyers too are expected to opt for the more feature-laden 125cc models.

Hero MotoCorp’s 110cc Maestro, which is the third best-selling scooter brand in the domestic market, has reported sales of 42,537 units in November. It has grown by a substantial 61.61 percent YoY. Suzuki’s 125cc Access is the fourth largest seller with sales of 35,245 units in November. The sale of the Suzuki Access 125 has grown by 41.97 percent YoY, which is remarkable for this product. Notably, just like the Honda Activa, the Suzuki Access 125 remains one of the most trusted scooter brands despite being about a decade old in the domestic market.

Honda’s 110cc Dio stands as the fifth bestselling scooter model with sales of 27,561 units, up 106 percent YoY. The sharp YoY growth can be attributed to the sharp decline in its sales due to the infamous demonetization drive by the central government in November last year.

The scooter segment, which stood at 31.85 percent of the total domestic two-wheeler market during April-November 2016, now accounts for about 33.75 percent of the same during the corresponding period of this fiscal. This only underlines the segment’s steadily growing size and relevance in the domestic demand for two-wheelers in India.