The lifting of the diesel ban in Delhi-NCR, pre-festive season demand coupled along with the better-than-expected monsoon season has augured well for the Indian automotive industry. SIAM foresees 10% growth for H2, 2016-17. 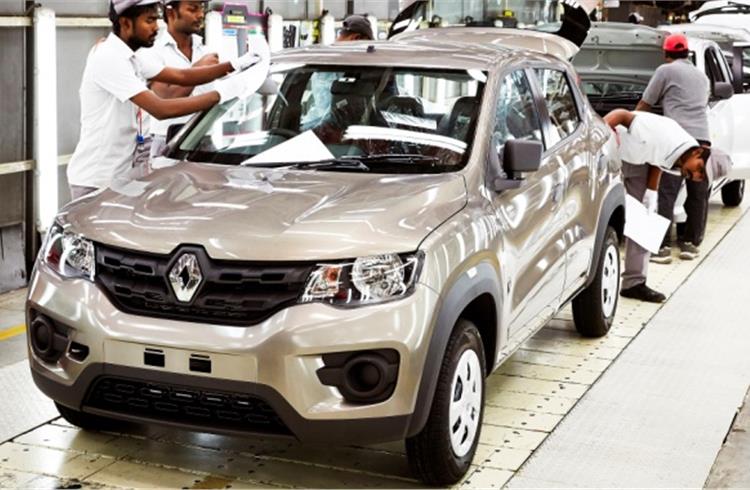 The lifting of the diesel ban in Delhi-NCR, pre-festive season demand coupled along with the better-than-expected monsoon season has augured well for the Indian automotive industry, especially passenger vehicles (PVs) which clocked the highest monthly sales since March 2012 (292,118 units).

According to the monthly sales data released by the Society of Indian Automobile Manufacturers (SIAM) today, PV sales rose by nearly 20 percent at 278,428 units in September largely driven by the record sales posted by bellwether Maruti Suzuki India during the month. The carmaker posted its highest ever monthly sales of 137,321 units, thus contributing to over 49 percent of the total PV sales.

Among the major growth drivers was the utility vehicle segment which reported a 37.9 percent rise in sales at 66,851 units. Passenger car sales grew at a strong 15.1 percent YoY to 195,259 units, with vans also clocking 15.6 percent rise at 16,318 units. The anticipation of huge demand for the upcoming festive season prompted manufacturers to flood dealerships with stocks, thus resulting in higher despatches during the month. The positive demand environment is likely to prevail going forward, with retail deliveries also expected along similar lines.

Overall industry sales across vehicle segments grew by 20.16 percent at 2,260,992 units in September 2016. The two-wheeler industry carried on the strong momentum from last month and clocked over 20 percent growth with sales of 1,868,993 units. While scooters led from the front with over 30 percent rise YoY, motorcycles also managed to sustain the recovery seen in the last couple of months with a rise of 16.3 percent in sales during September.

Strong rural demand on the back of an ample monsoon season has provided the much-needed fillip to the motorcycle industry and it is likely to soldier on ahead with the same intensity, given the start of the festive season and the roll-out of the benefits of the Seventh Pay Commission.

While all other segments were in the black during September, the dip in medium and heavy commercial vehicles (M&HCVs) proved to be a cause of concern and weighed on the overall industry growth.

M&HCV sales fell for the third consecutive month with a decline of over 20 percent in September at 24,748 units, thus dragging the overall CV sales and offsetting the double-digit growth posted by LCVs during the month. The poor show of M&HCVs is largely due to the delay in purchases by fleet owners. Drying replacement demand, less-than-expected Q1 GDP growth numbers and falling coal production has adversely affected demand for the M&HCV segment. 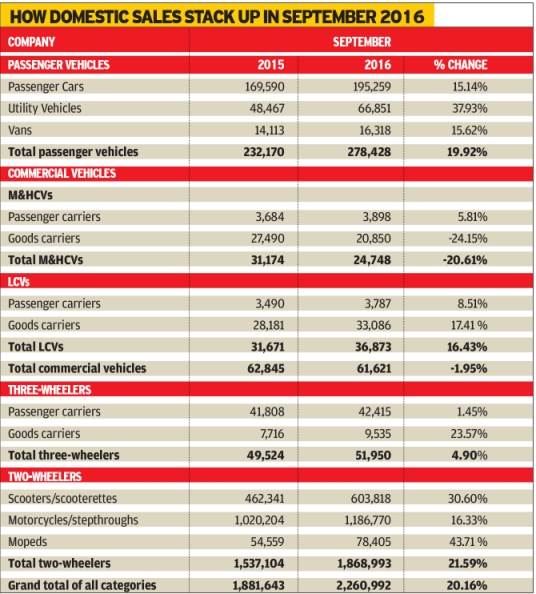 PVs near 1.5 million-mark in April-September

During the first half of 2016-17, PV sales rose 12.3 percent to touch 1.49 million units. The strong momentum due to sustained economic growth, a barrage of fresh launches and a better-than-expected monsoon has augured well for the PV industry as it looks well on track to cross 3 million unit sales in FY 2017.

Powering sales were UVs with 40% year-on-year growth to 373,354 units Passenger cars sold a total of 1,026,526 units (+5%). Clearly, the flurry of new models and the lifting of the diesel ban is giving a fillip to the sector. Expect UV sales to further accelerate in the fiscal, with a host of new launches planned for the festive season. Van numbers grew by 8.1% to 94,009 units.

The overall industry also performed well on the back of increased demand for two-wheelers. The two-wheeler segment has notched 17.5 percent during growth in the six months of this fiscal. The scooter, motorcycle and mopeds segments grew by 26.9 percent, 12.6 percent and 26.3 percent respectively in April-September 2016 over the last fiscal. According to SIAM, rural driven motorcycle segment (~50 per cent rural contribution) is expected to grow after stagnating for the past couple of years, due to positive monsoon and a good expectation of Kharif production in FY17.

Growth in the overall CV segment slowed to 6 percent in April-September as three consecutive months of decline in the M&HCV segment dented the overall volumes. M&HCVs posted a fall of 1.1 percent to 112,916 units, thus offsetting the double-digit growth in LCVs during the first half. LCV sales saw 11.7 percent YoY growth to 195,767 units during the period. 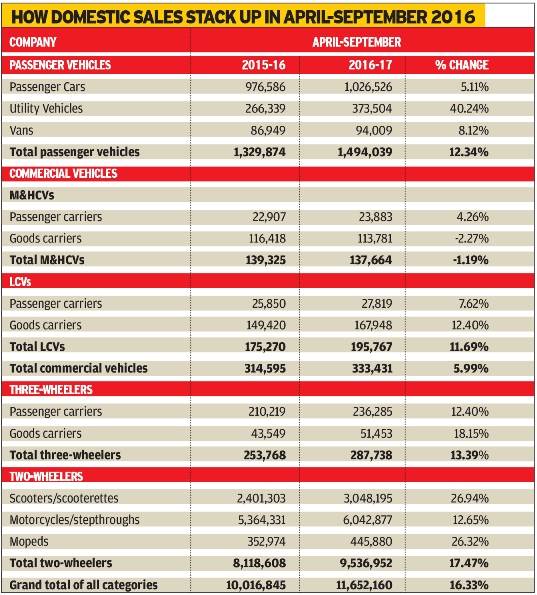 Building on the strong momentum from the first half of 2016-17, PV sales in India are likely to clock double-digit growth in the remainder of the fiscal as well. According to SIAM, the 7th Pay Commission is expected to provide a boost to consumer spending and will positively impact passenger vehicles. It is also expected to propel replacement of cars bought five years ago during the 6th Pay Commission payouts.

The apex body has pegged the PV industry to grow at around 10 percent in October-March 2016-17 against the near 12-percent growth clocked in the first half.

“This is due to high inventory build-up in Q2 for the earlier festive season. We expect slight correction in Q3 and moderate growth in Q4 on account of GST. Growth in Q4 is expected to moderate due to postponement in demand (to Q1 FY18), in anticipation of lower prices in Q1 FY18 owing to GST implementation,” SIAM said.

The industry body also highlighted the need to monitor actual implementation of GST and its impact on Q4 inventory. “There is concern presently regarding inventory being carried forward from March to April 2017, dealers stand to lose on the excise duty paid on March stock,” it added.