With one out of two passenger vehicles sold being a Maruti and the company having a 50 percent share of the market, it’s no surprise that the carmaker rules the best-seller chart. 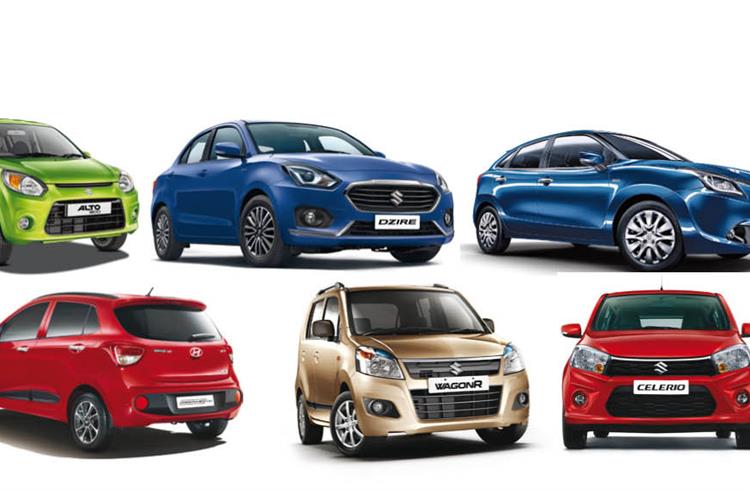 Three years from now, you could be driving an electric car that bears the Maruti Suzuki logo but for now, and the immediate future, the bellwether of the Indian passenger vehicle (PV) industry has no intention of loosening its stranglehold on the PV market.

One out of two PVs sold in India is a Maruti, and it’s been that way for long with the No. 2 player, Hyundai Motor India more than a yawning distance away. At present, Maruti commands 50.12 percent of the PV market share while Hyundai has 16.44 percent, with the rest of the competition in single digits. With such a strong hold on the domestic market, it’s no surprise then that Maruti also dominates the Top 10 best-selling PVs list. For the past couple of years, seven cars from its stable have ruled the charts – while the ranking may have shifted a rung or two, the sheer domination of Marutis has not.

In October, when sales were on the lower side (compared to a record-setting September 2017), due to huge dealer inventory fill-up in ahead of the Diwali season, Maruti Suzuki was still able to register positive growth of 9.25 percent with sales of 135,128 units (October 2016: 123,684.

The new-gen Dzire sedan, whose sales have kept on accelerating since its launch earlier in May, finally saw its numbers settle down to a realistic 17,447 units (Diesel: 8,579 and Petrol: 8,868) for the segment. In August as well as September, the hot-selling sedan had zipped past longstanding topper and sibling Alto to become the No. 1 selling car with sales of 31,427 units and 26,140 units respectively.

Nudging the Dzire to No. 2 position, the Maruti Alto regained top spot in October, selling 19,447 units to post growth of 3.14 percent (October 2016: 18,854). The other five Marutis in the Top 10 list are the Baleno, Wagon R, Celerio, Swift and the Vitara Brezza. These seven models together account for a total of 100,419 units or 74.31 percent of the carmaker’s total PV sales in the month.

At No. 3 is the Maruti Baleno, which went home to 14,532 buyers, a notable 35.58 percent year-on-year growth (October 2016: 10,718). This snazzy hatchback, which is a solid value-for-money package in a contemporary and attractive form, is tremendously popular in the premium hatchback category. Maruti, not surprisingly, is making as many Balenos as it can sell.

The Hyundai Grand i10 hatchback is at No. 4 and sold 14,417 units, its YoY growth remaining almost flat at 1 percent (October 2016: 14,530). The car comes loaded to the gills after its recent update, and with an automatic transmission option to boast upon, it is becoming a fair choice for urban customers.

The quintessential tall-boy, Maruti Wagon R secures the No. 5 position with sale of 13,043 units, albeit declining 13.47 percent (October 2016: 15,075). At No. 6, Maruti’s another offering in the B-segment, the Maruti Celerio made a comeback into the Top 10 list with sales of 12,209 units, growing 27.42 percent (October 2016: 9,581). The AMT option on both these cars is also gaining huge traction among ladies and people looking for affordable and convenient city runabouts.

The No. 7 best-seller this October is the Maruti Swift, which sold 12,057 units, down 17.4 percent compared to year-ago sales (October 2016: 14,611). The Swift is due for a big update in the form of the third-generation model, which is slated to be introduced into the Indian market at the upcoming 2018 Auto Expo to be held in February. The car, which is built on a new lightweight platform and uses high-tensile steel, will also offer a host of contemporary features on the inside.

The Maruti Vitara Brezza maintains the same position this October as it did a year ago – No. 8 – with sales of 11,684 units, up by 6.18 percent (October 2016: 10,056). New entrants into the segment, the Tata Nexon and the recently launched new Ford EcoSport are set to give a tough fight to Maruti’s compact SUV.  Where the Nexon attacks with its aggressive pricing, Ford, on the other hand, has a feature-laden offering, with the option of an automatic transmission in the EcoSport. The battle lines have been drawn and the coming months will see the SUV-ival of the fittest.

At No. 9 is Hyundai’s Elite i20 premium hatchback, which went home to 11,012 buyers, dropping three places from last October when it was bought by 11,532 owners.

Wrapping up the Top 10 list is the Korean carmaker’s Creta SUV, which found 9,248 homes. Both the Elite i20 and the Creta have been consistently doing well, and are liked for their features and the fit and finish levels in their respective segments. The Creta has also recently seen the competition grow bigger in the market, with the introduction of the Renault Captur, which has been launched at an aggressive Rs 999,000. While it starts at the same price as the base petrol variant of the Creta, the Captur undercuts it by a significant Rs 70,000 in its top-end diesel manual trim.

While wholesale numbers were on a corrective trend in October, expect a similar sales performance in November albeit the figures per se might show an uptick simply because last year the industry – and the country – experienced a shocker in the form of the sales speedbreaker: demonetisation.