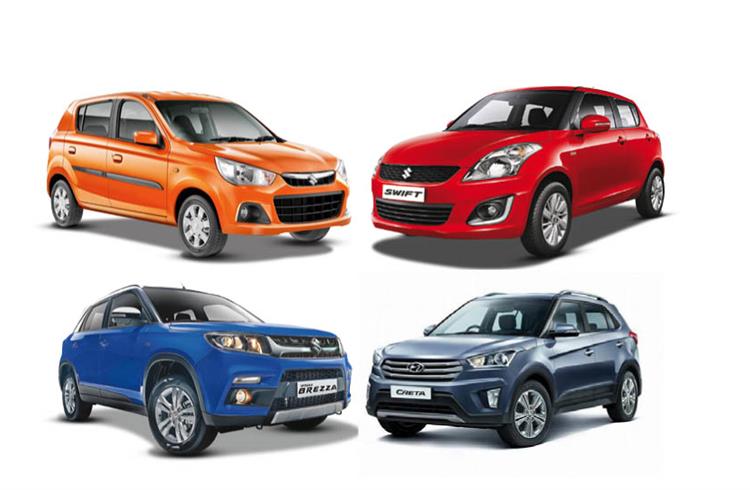 The passenger vehicle (PV) segment is leading the charge for the Indian automobile industry and looks good to notch a new high in FY2017-18. This, coming on the back of record high sales of over 3 million PVs in FY2017, will be a big positive for industry.

In May, a month in which the company sold 130,248 units (+16.10%) in the domestic market, Maruti straddles the PV Top 10 with seven vehicles across categories – four hatchbacks, one SUV, one sedan and one MPV. A year ago too, it had seven but the Celerio has moved out and the Ertiga has driven into the Top 10. Also, every Maruti model in the Top 10 has found more buyers in May 2017 as compared to May 2016. Not surprisingly, the company has increased its overall domesticPV market share by 3.23 percent from 48.60 percent to 51.83 percent over a 12-month period.

Hyundai Motor India has taken three slots – No. 5, 7 and 9 – in May 2017 with its Grand i10, Elite i20 and the Creta SUV respectively. Clearly, these two carmakers, who account for 68.22 percent of the Indian PV market, leave very little room for other OEMs to muscle in.

The Maruti Vitara Brezza takes sixth place with 12,375 units, rising impressively from 10th position in May 2016. Interestingly, May 2017 sales are the best yet for Maruti’s first-ever compact SUV which was launched in February 2016. Till end-May the Brezza has sold a cumulative 137,231 units, proving how big a game-changer the vehicle is.

At No. 8 is the new Maruti Dzire with sales of 9,073 units. Considering the latest avatar of the popular was launched just a month ago, it makes for an impressive debut on the sales front. Expect the Dzire to gradually climb up the sales chart.

The Hyundai Creta drives in at No. 9 with 8,377 units. Like the Brezza has been for Maruti, the Creta is for the Korean carmaker drawing buyer in droves.

As a result of heavy pre-GST discounting, expect June numbers to see a spike. SUV sales though are likely to be muted compared to earlier months. With GST giving an around 6-7 percent relief to larger cars and SUVs, consumer demand for these vehicles should acclelerate, translating into an uptick in sales from July onwards.