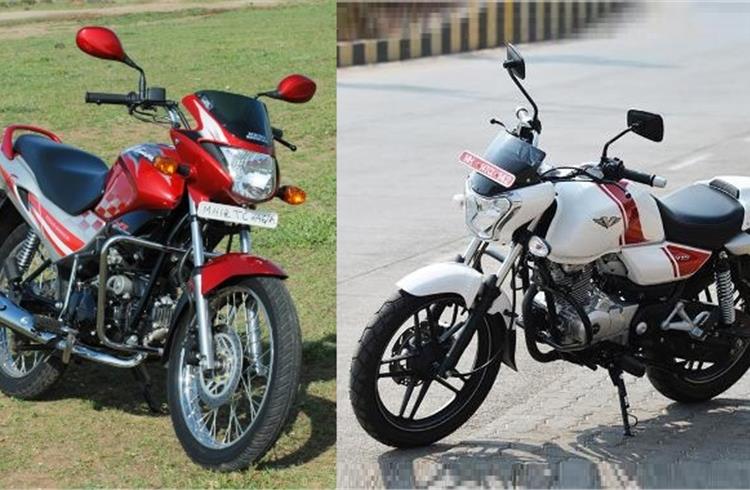 The tepid motorcycle sales, however, did not affect the momentum of Bajaj Auto’s recently launched V15 commuter bike. The 150cc machine debuted in the Top 10 chart in April with sales of close to 24,000 units, helping it grab the 10th spot. However, the motorcycle, which uses metal of the decommissioned INS Vikrant (India’s first aircraft carrier) in its construction, has jumped two places to the eight spot in May with sales of 31,848 units. Autocar Professional had first reported about the V15’s growing popularity in March this year, with the company planning to ramp up production to 1,000 units a day.

Meanwhile at the top half of the table, Hero MotoCorp continues its dominance by occupying the top four slots. The Hero Splendor, despite sitting at the summit, has witnessed de-growth with sales falling 14% year-on-year (YoY) to 207,010 units. India’s largest two-wheeler manufacturer will be banking on the Splendor i-Smart 110cc to make an impact on the slowing Splendor series sales. 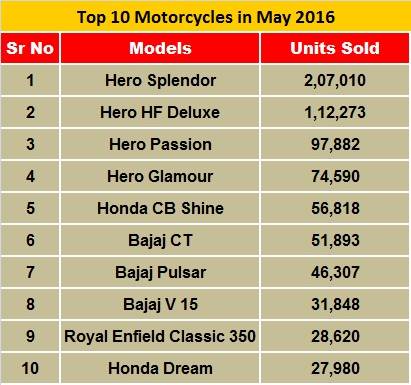 Also posting declining numbers was the Hero Passion series, with sales down by 6% YoY to 97,882 units. Passion numbers have been heading south consistently, helping the company’s HF Deluxe consolidate its second spot with sales of 112,273 units, up 20% YoY.

The slowing figures of Hero’s Splendor and Passion series have also affected the company’s market share in FY2016-17. Compared to the 53% market share that the company held in April-May 2015, it now has a 50.65% share of the pie.

Meanwhile, the bottom half of the table features three Bajaj motorcycles. Apart from the V15, the sixth and seventh places are occupied by the CT 100 and Pulsar respectively. The CT100, which became the company’s best-selling brand in April, continued to beat the Pulsar series in May 2016 with sales of 51,893 units compared to the latter’s 46,307 units. The company has however outlined an aggressive product plan for the upcoming year with a bigger Pulsar in the offing.

The see-saw between the company’s CT100 and Pulsar models has helped it to maintain its market share at close to 18% in April-May 2016. 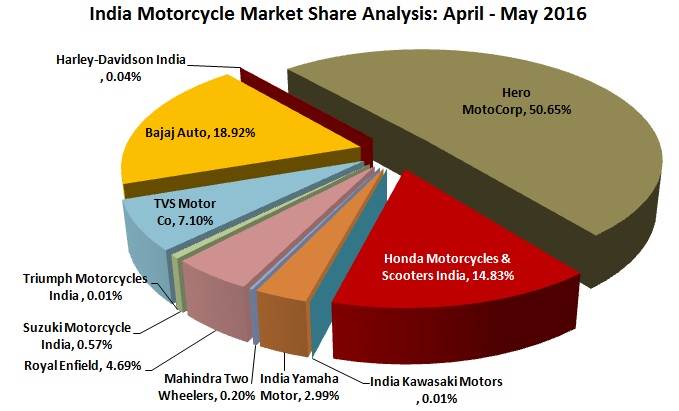 Completing the list despite posting negative sales is HMSI’s 110cc Dream series, which sold 27,980 units in May 2016 (May 2015: 39,710). In an attempt to boost the sales of its mass commuter motorcycle portfolio at the most affordable end, HMSI rolled out the CD 110 Dream DX in March. Despite being beaten by Hero in the 125cc segment and declining sales of the Dream series, HMSI had a 14.83% motorcycle market share in FY2016-17.