A smart sales performance by the medium and heavy commercial vehicle segment over the past 12 months even as LCVs see flat growth has helped pep up overall numbers. 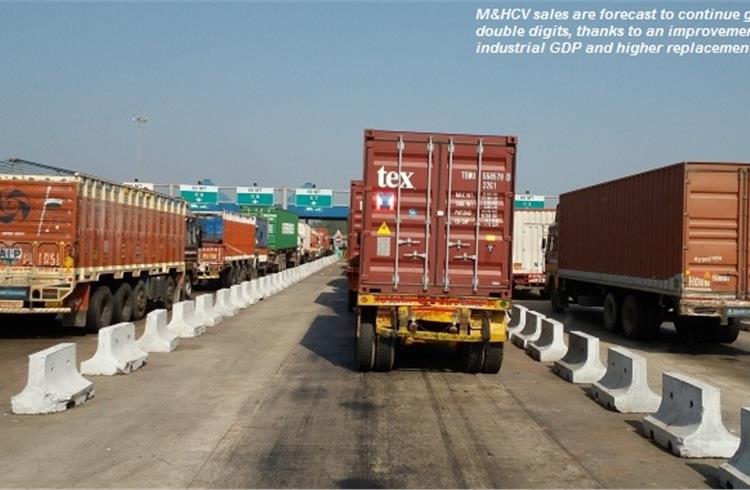 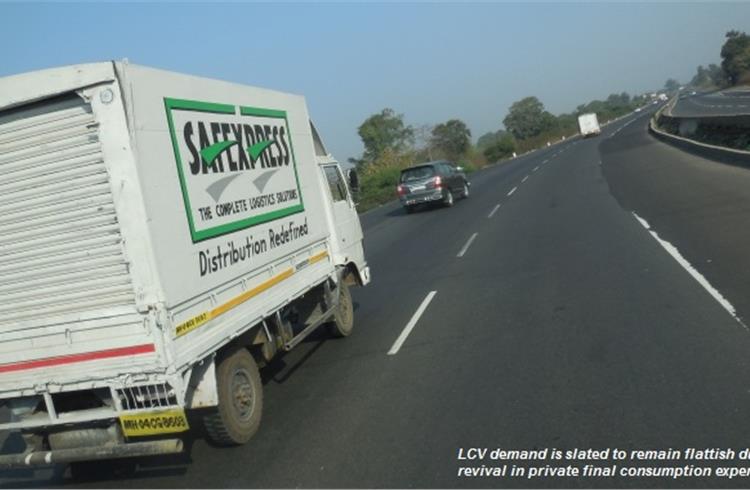 Commercial vehicle sales, which comprise  medium and heavy commercial vehicles (M&HCVs) and light commercial vehicles (LCVs) in calendar year 2015 grew to 7.37 percent to 650,993 units (2014: 606,255 units). This growth is mainly thanks to the sterling 30.03 percent growth achieved by the M&HCV sector, which sold 280,388 units in 2015 (2014: 215,634). The sector's performance helped reduce the overall impact of the LCV segment, whose sales fell by 4.72 percent. While good times have still to arrive for LCV manufacturers, it is important to note that the rate of sales decline has slowed down substantially.

The Indian CV market ranks among the top six global markets and will likely witness robust growth in the next decade as the country strives to develop a modern infrastructure spanning the metros, Tier 1, 2 and 3 towns. Recognising the growth potential of India, almost all the major global OEMs have set up base here and are eyeing a slice of the large market.

Home-grown players like Tata Motors (44 % market share currently) and Ashok Leyland (18% market share currently) have dominated the market for the past decade and more. The same decade has also seen premium European players like MAN Truck, Daimler Trucks, Scania and Volvo enter the Indian market. This has turned the M&HCV market very competitive, resulting in some very modern trucks and also improved dealer networks and aftersales practices, with a sharp focus on total cost of ownership.

Mahindra & Mahindra, as a result of its outstanding performance in the small commercial vehicle and pick-up segment, has become the second largest player with a market share of 24 percent in the overall CV segment. During CY2015, the company sold a total of 158,588 units against 160,042 units in 2014.

Ashok Leyland, which  sold 117,751 units in 2015 as compared to 83,834 units in 2014, recorded strong 40 percent growth. During CY15 the company has registered tremendous double-digit growth in the Medium and Heavy commercial segment (M&HCV).

VE Commercial vehicle increased its sales by 18 percent, selling  40,411 units. Clearly, the Eicher Pro Series of trucks  is given a new fillip to the company's sales.

While most CV manufacturers saw sales growth in 2015, Piaggio Motors and AMW Motors saw their sales decline by 21 percent and 55 percent respectively. They will be looking to re-invent their growth strategy in 2016. 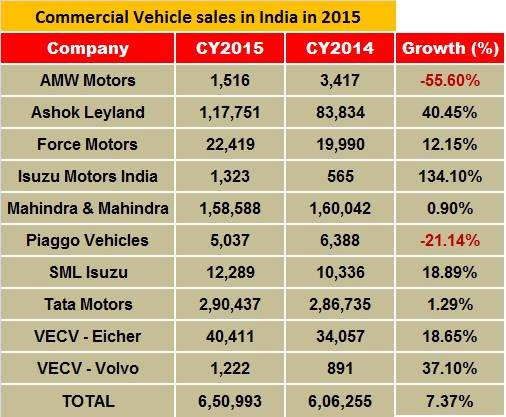 With Q4 of the fiscal year 2015-16 underway, automakers will be looking to drive gains. However, there are challenges to be faced, even as poor demand from the agricultural sector has kept growth in check. India’s Index of Industrial Production (IIP) for November 2015 contracted 3.2 percent compared to 9.8 percent growth in October. Also, the ongoing diesel ban in the Delhi-NCR region will be dampener on sales, at least till March 2016.

SIAM's FY2016 Q3 review, released on January 11, forecasts that 2015-16 will see M&HCV (cargo carrier) sales continue to grow in double digits due to an improvement in industrial GDP and higher replacement demand.

It helped that regulatory changes like ABS implementation and NGT ban sales led to pre-buying in August and September 2015 and helped boost sales. Meanwhile, sales of tractor-trailers are up due to improvement in passenger car movement, along with demand for supply of steel and cement. The tipper market has  recovered due to speedier execution of construction of national highways as also resumption in mining activities in a few mines in Orissa, Karnataka and  Jharkhand.

For the bus market, there will be demand for LCV buses from schools and educational institutes while for M&HCV buses, the improving profitability of operators due to low diesel prices is expected to boost sales of this segment.

The LCV goods carrier market, however, is going to see flat demand, due to slow revival in private final consumption expenditure.

Overall, though, CV OEMs are optimistic that growth will come their way this year, across M&HCVs and LCVs, with improved GDP to boot. 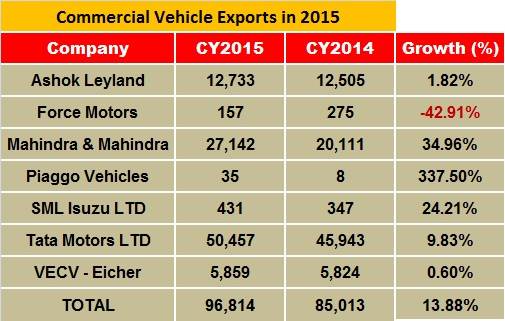