August 2015 sales numbers were a mixed bag for the Indian passenger vehicle industry, and even as lower interest rates and fuel prices spurred some demand, it was largely the carmakers with new offerings who benefitted. 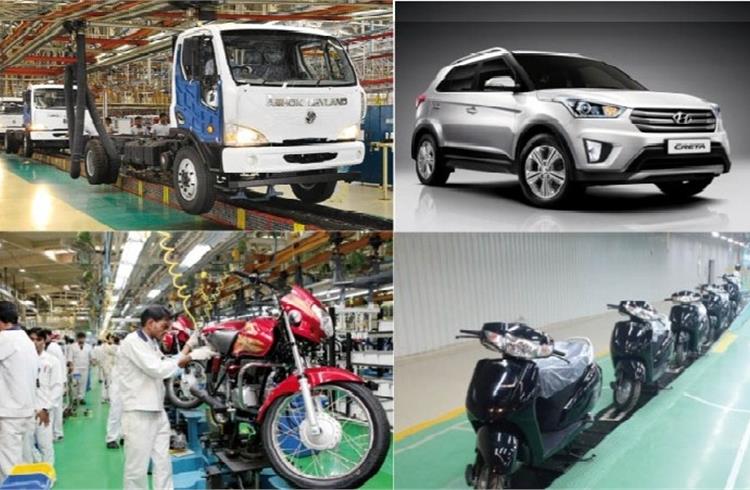 August 2015 sales numbers were a mixed bag for the Indian automobile industry. Even as car sales grew for the 10th straight month, a fall in overall two- and three-wheeler sales point towards a slow recovery amidst faltering demand due to erratic monsoon patterns.

While a benign interest rate regime and low fuel prices spurred some demand in the passenger vehicle industry, a deficient monsoon impacted rural and semi-urban incomes and in turn hit sales of two-wheelers, light commercial vehicles and three-wheelers in August.

Car sales rose largely on anticipation of an increase in demand ahead of the upcoming festive season, which led to soaring manufacturer despatches, and it was mainly the carmakers with new products that benefitted.

M&HCV sales in India stuck to the growth path, carrying forward the momentum of the past year, the medium and heavy commercial vehicle (M&HCV) segment registered 35.39 percent growth during the month to 23,016 units. However, small and light commercial vehicle sales continued to struggle due to the falling need for last-mile connectivity and lack of easily available finance. LCV sales fell 7.41 percent to 29,182 units. As a result, overall CV sales grew by 7.58 percent during the month to 52,198 units. 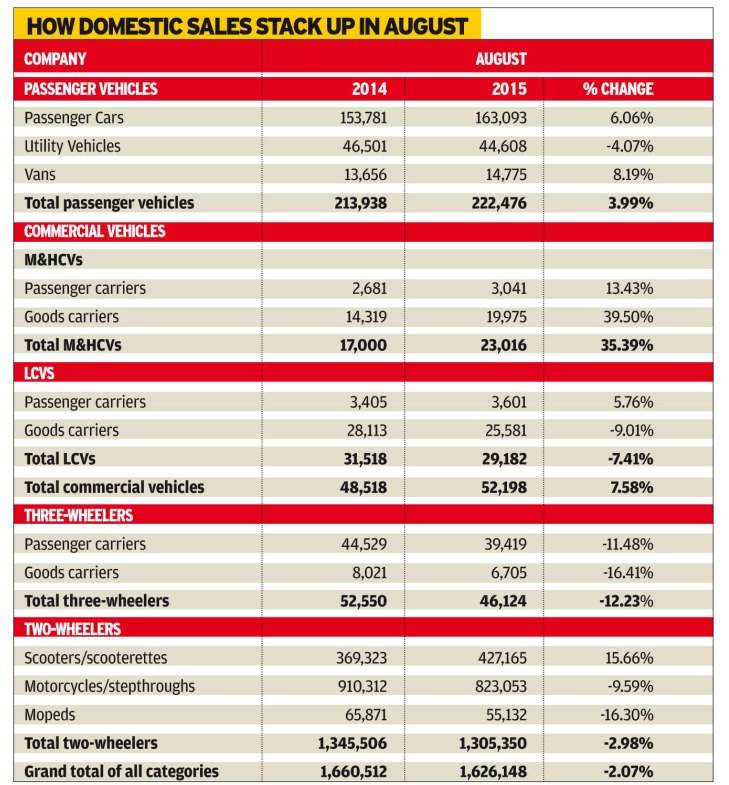 Speaking on the industry’s performance, Vishnu Mathur, director general of SIAM, said: “Rural markets are still under-performing under the impact of the last monsoon season. Motorcycles that sell in large volumes, especially in these markets, have pulled down the industry sales with their high decline in numbers.”

However, Mathur is bullish on the segment and is hopeful of sales picking up in the coming months due to the festive season. With the Government announcing the postponement of the GST to 2017, Mathur believes that growth in the automobile sector has been pushed 2-3 years down the line as the new regime would have brought about a uniform tax structure and given a fillip to sales.

A future rate cut by the Reserve Bank of India would also give some aid in fueling consumer demand for passenger vehicles in the coming months and could act as a trigger for rural and urban buyers alike.

The two-wheeler industry is looking forward to improved rural demand from starting October 2015, with the approaching festive season. Meanwhile, with large infrastructure projects yet to take off, M&HCV sales are likely to be driven by replacement demand with the auto sector anxiously looking at big-ticket reforms from the government to boost the sagging spirits of the industry.

HOW THE NUMBERS STACK UP for cars

Maruti Suzuki India remained on top spot in August, but falling sales of compact cars, which include models like the Swift, Ritz, Celerio and Dzire, capped the growth in sales numbers for the carmaker as it registered an 8.6 percent rise (August 2014: 98,304) in domestic sales at 106,781 units in August.

Sales of compact segment cars came in 11.3 percent lower at 41,461 units against 46,759 units a year ago. However, sales of the entry level mini segment, which comprises of the Wagon R and the Alto, grew 8.6 percent to 37,665 units. Rising sales in this segment indicate an increase in demand from the semi-urban and rural areas, which had seen a slowdown in the last few months.

Hyundai Motor India continued to cash in on the success of its recently launched Creta SUV and claimed the second spot on list of top domestic car sellers. Sustained demand for the premium hatchback Elite i20 also helped the carmaker as it posted a sharp 20 percent rise in domestic sales to 40,505 units in August. Out of the total domestic sales, the Creta, Elite i20 and i20 Active contributed to nearly 44 percent of the sales with 17,800 units.

Commenting on the sales performance in August, Rakesh Srivastava, senior vice-president (Sales and Marketing), said: “Hyundai recorded its highest-ever single month with a volume of 40,505 units and growth of 20 percent. The company looks forward to sustain double-digit growth above industry growth rate.”

Honda Cars India’s good run came to a halt in August with the Japanese carmaker witnessing de-growth in sales for the first time this year. Its sales fell 6.6 percent YoY to 15,655 units in August. Sales of the new Jazz also slowed as Honda delivered 5,404 units in August as against 6,676 units in July. The City reclaimed its top spot with 5,405 units while the Amaze followed with sales of 3,260 units. The remaining product-wise split comprises 622 Brios, 899 Mobilios and 65 CR-Vs.

Home-grown SUV maker Mahindra & Mahindra also struggled as new entrants like the Creta and the S-Cross made inroads in the utility vehicle market. M&M’s sales fell 7 percent to 14,198 units in August. Now, with the just-launched TUV300, M&M hopes to see new gains in the market.

Tata Motors also saw muted growth in passenger vehicle sales in August with a 2 percent rise at 11,194 units. The sale of passenger cars in August 2015 was higher by 19 percent at 9,814 units, compared to 8,229 units a year ago. This compensated for the 50 percent decline in sales of utility vehicles in the month at 1,380 units.

Toyota Kirloskar Motor sold 12,547 units (including exports) in the month reporting 1percent YoY growth. The company exported 1,386 units of the Etios sedan, while the new Camry more than doubled its sales in the month with most buyers opting for the hybrid variant. Commenting on the growth, N Raja, director and senior vice-president, Toyota Kirloskar Motor said, “We have registered 1 percent growth in the overall market this month. The growth can be partly attributed to the success of the New Camry which has doubled its sales in the domestic market and with the existing pending orders will soon exceed the total sales of Camry in 2014. This also shows the acceptance of hybrid technology in India.” 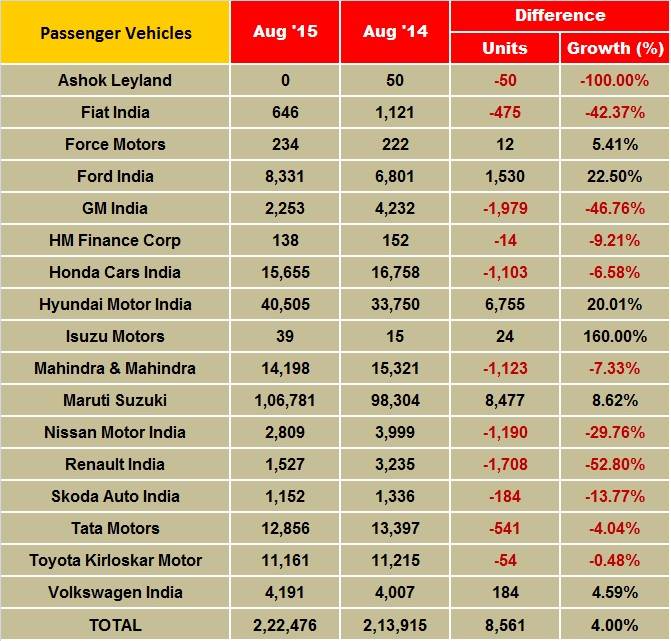 Domestic demand momentum remained subdued for two-wheelers during August 2015 on the back of a deficient monsoon for the most part of the month. This particularly affected the mass commuter motorcycle segment (and hence the dominating models and respective companies in the same category) due to slowdown of demand particularly from the rural pockets across the country. Additionally, the delayed festive season this year (by three weeks as compared to the last year) is another factor contributing to the woes.

On the other hand, the demand for scooters from the urban sections of India continues to grow and insulate the OEMs against slow motorcycle sales.

The largest two-wheeler manufacturer in India, Hero MotoCorp (HMCL) has reported total sales of 480,537 units during August 2015, selling 78,072 units fewer than its August 2014’s sales of 558,609 units. The monthly sales of HMCL saw a decline of 13.98 percent YoY. To boost its sales in the coming months leading to the festive season, the company has lined up a few launches that include the rollout of two new scooter models and new refreshes of its motorcycle models.

“Hero MotoCorp will commence the new launches with the introduction of two brand new scooters, followed by new exciting bikes. With the upcoming festive season, we expect sentiments to improve which in turn is likely to revive market demand. The industry expects the second half of the year to be better than the first two quarters,” reads the official release from HMCL.

Honda Motorcycle & Scooter India (HMSI) continues to grow on the back of the strong demand for its scooter portfolio, primarily the Activa models. The company sold a total of 373,202 units during August 2015, up by 0.63 percent YoY. HMSI had sold 370,866 units during August last year.

In the motorcycle category, HMSI recorded sales of 126,452 units in August 2015, down by 17.41 percent YoY. The company had sold 153,117 units in August last year. HMSI’s upcoming 160cc motorcycle model, the CB Hornet 160R, which will see a festive season launch, is expected to consolidate the company’s foothold in the 150cc-180cc premium commuter segment.

According to the company’s official release, HMSI’s domestic market share for August 2015 stood at 29 percent. Its flagship motorcycle the four-cylinder, 649cc, 85bhp CBR650F has received a positive response from the market as the company has despatched more than 40 units in just one month’s of its commercial launch.

Continuing to grow on the back of its decked-up new product portfolio, Pune-based Bajaj Auto Ltd (BAL) has registered sales of 290,436 units during August 2015, up by 2.16 percent YoY. It had sold 284,302 units in August 2014. A Motilal Oswal report says that “BAL’s newly launched Pulsar series is seeing good response, with waiting period of one month. For most of the BAL dealers, stock inventory is steady at one month (for August 2015).”

On the mass commuter motorcycle side, the CT100 continues to sell well for the company, boosting its sales volumes substantially.

Royal Enfield saw a growth of 59.26 percent in its August 2015’s sales of 41,600 units. The company, which is witnessing bullish growth in the demand of its Classic 350 model, had sold 26,121 units in August last year. The company is now developing two new engine platforms which are expected to be revealed next year. However, it is also learnt that the company will not be participating in the upcoming 2016 Auto Expo in New Delhi.

Mahindra Two Wheelers (MTWL) has reported domestic sales of 14,356 units in August 2015. The company plans to finally roll out its much awaited single-cylinder 300cc motorcycle Mojo in September 2015.

The two-wheeler industry is looking forward to improved rural demand from starting October 2015. 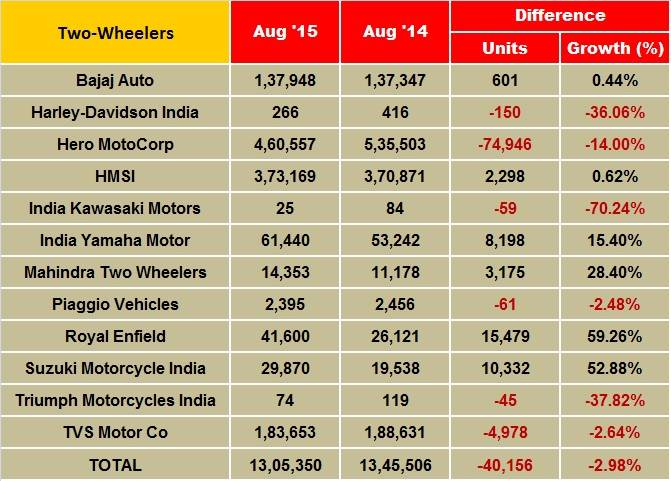 Following the last 11 months’ positive momentum, the medium and heavy commercial vehicle (M&HCV) segment in India recorded strong double-digit growth and all the key players registered healthy growth in sales. The uptick in infrastructure and mining operations are leading to a rise in demand for heavy vehicles. It also looks like gradual growth is also headed towards the LCVs sector as the rate of decline has come down.

Indicating strong future growth for the M&HCV segment, rating agency ICRA has forecast that the M&HCV segment is likely to register 12-14 percent growth during FY’16.  This increase will be largely driven by continuing trends towards replacement of ageing fleet, improvement in fleet economics and some pre-buying ahead of the mandatory introduction of Anti-Lock Braking Systems from October 2015. Here’s looking at how the OEMs fared in August 2015.

VE Commercial Vehicles posted an increase of 17 percent year on year with sales of 3,009 units (August 2014: 2,571 units), pointing to the growing demand for the Eicher Pro Series of trucks. 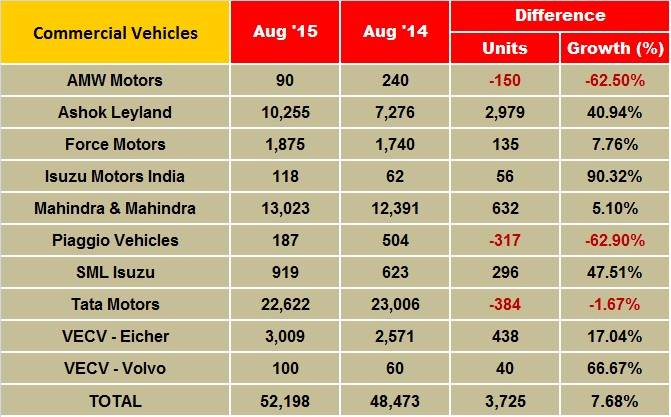 Also read: Passenger car sales in India up 6%, UVs down 4% in August