The real-world sales story is looking good with all-round growth for all vehicle segments, other than tractors. 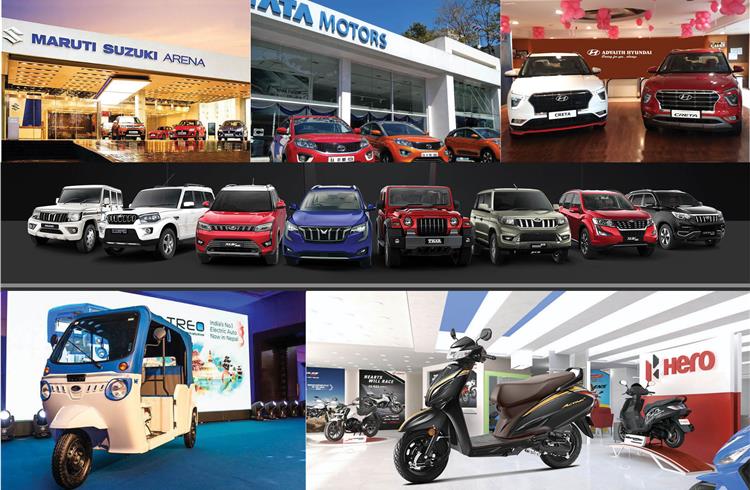 The Federation of Automobile Dealers Associations (FADA) today released the all-India retail sales numbers for September 2022 and the data reveals that the industry is poised to record sustained growth going ahead.

The PV segment is the star performer with sterling 44% growth, while three-wheelers (up 6%), tractors (up 37%) and CVs (up 17%) also show their current demand dynamics versus September 2019 retails.

A close look at FADA’s industry-wide retails (see data table above) reveals very little red and plenty of green, indicating that the growth momentum for India Auto Inc is very much there and can only get better in the months to come. FY2023 clearly is set to be a record year on multiple fronts. 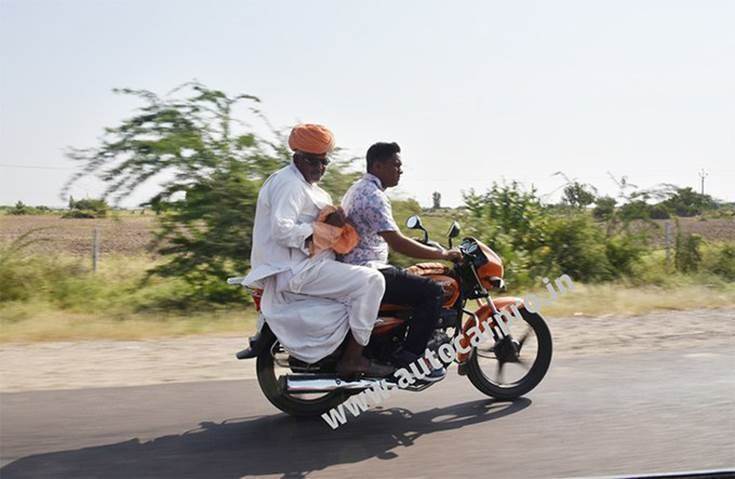 His comments are incisive given that the maximum two-wheeler volume comes from the commuter motorcycle segment (100-110cc). The FADA president pointed out that sales in rural India, particularly from the sector in Himachal Pradesh, Haryana, Uttarakhand, Uttar Pradesh and Jharkand “showed weakness with lower contribution.”

This is amply reflected in market leader Hero MotoCorp losing its No. 1 position in September 2022 to Honda Motorcycle & Scooter which with 284,160 units took a 28% share of the overall two-wheeler market compared to Hero MotoCorp’s 24.64% and 250,246 units. The difference of 33,914 units could be pinned down to fewer commuter bike sales for Hero MotoCorp; Honda in comparison is the scooter market king with its Activa series. 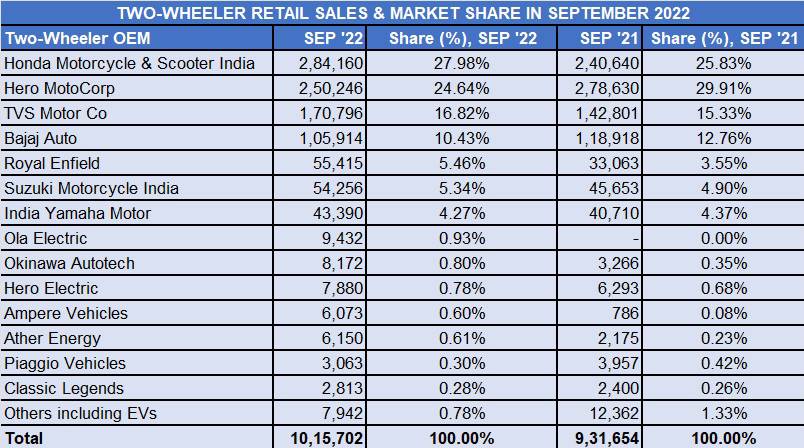 Three-wheelers lead the shift from ICE to EV
This segment, billed as the low-hanging fruit of the EV industry, along with two-wheelers, is leading the three-wheeler buyer shift to electric vehicles. And that’s not surprising given the USP of low cost of ownership in three-wheeled EVs, whether cargo or passenger transport. Furthermore, the return on investment is much faster given that most three-wheelers are used for commercial purposes and a majority are single-owner vehicles.

September 2022 saw 63,915 three-wheelers were sold which is a robust 72% YoY growth. But, importantly, 33,873 units or 53% are electric three-wheelers, with the majority – 32,153 units – being passenger-ferrying EVs. While IC and alternate-fuelled three-wheelers still see YoY demand, their rate of growth is slowing compared to their more eco-friendly EV brethren. 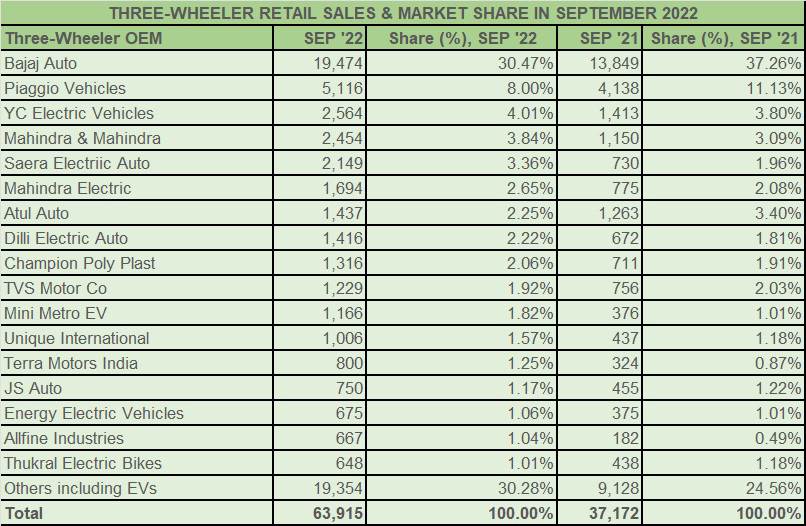 The passenger vehicle (PV) industry is on a roll. According to Singhania, “Better availability due to much-improved semi-conductor supply, new launches and feature-rich products have kept customers glued to dealerships for getting their favourite vehicles during the auspicious period. The waiting period continues to range between 3 months to 24 months, especially for SUVs and compact SUVs which have become the absolute choice for today’s customers.” 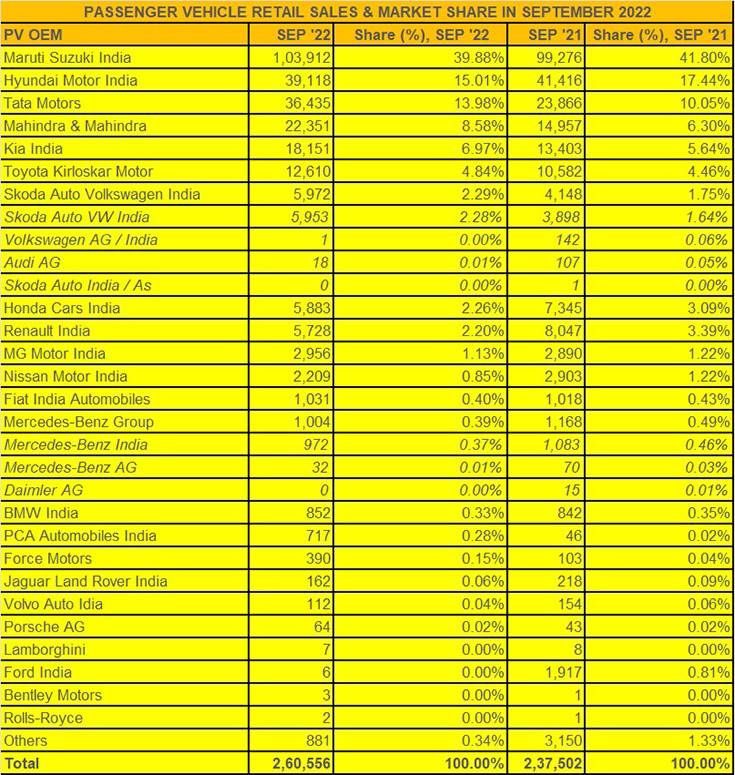 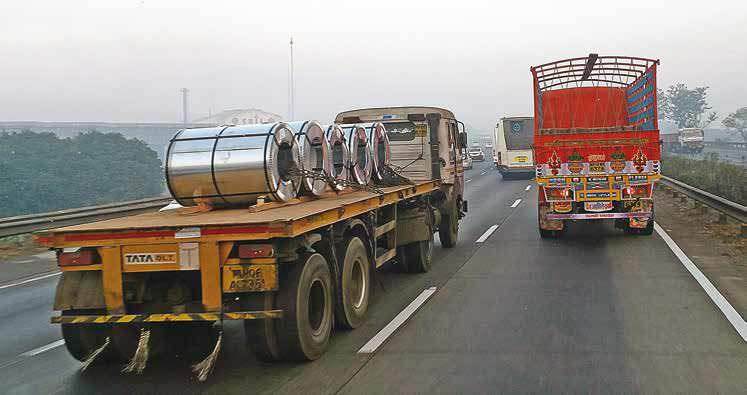 Commercial vehicles deliver the goods
While the commercial vehicle segment grew by 19% in September with 71,233 units, it is the HCV sub-segment which has displayed healthy growth of 40% YoY (21,318 units). Demand for heavy vehicles, a key growth driver for the industry, is coming from the steel, cement and mining industries as a result of the large government and private sector spend on infrastructure. Similarly, demand for passenger-transporting buses, which was dormant for over two years, is back with a bang with urban India back in action, re-opening of schools and inter-city travel taking off.

LCVs too are having a slice and more of growth road, and recorded sales of 43,076 units (up 15%), thanks to fleet replacement by logistics operators as well as the robust demand for small CVs from last-mile delivery operators across the country.

Near-term outlook:  The best is yet to come
If September brought the smiles back for India Auto Inc, then the coming months should make the smiles bigger. According to FADA President Manish Raj Singhania, “October will see auto retail on high ground with 24 days of the festive season in it. Dealers anticipate this to be the best festive in a decade for the PV segment as we anticipate even higher sales during the month. While semi-conductor supply continues to ease, FADA requests OEMs to match supply as per the demand so that PV sales can further receive a nitro-boost.”

He added, “The enquiry levels in two-wheelers is showing positive movement. If this segment, especially entry level models, also performs well and improves its growth to low double-digits, overall auto retail will see higher growth compared to the last two festivals but may still lag pre-Covid numbers of October 2019.”