Although it’s been a dismal and slow-selling first quarter in the ongoing fiscal, a hard-charging Hyundai drives ahead of Maruti Suzuki and Mahindra in the UV market share stakes. Sibling Kia is a close fourth. 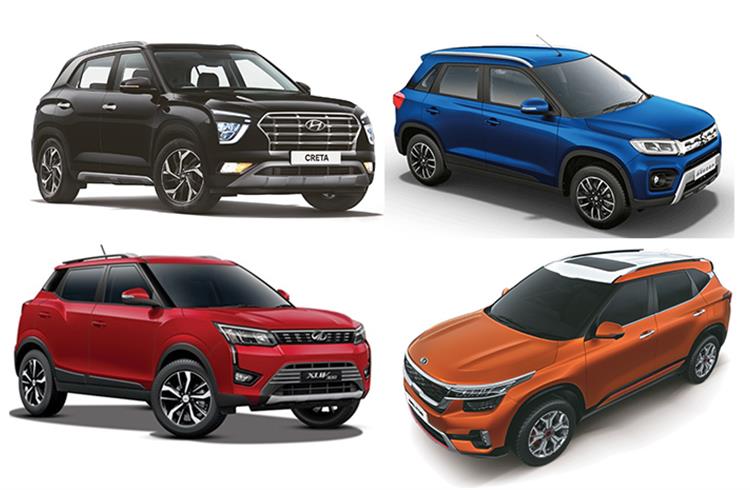 Nevertheless, even in what has been a difficult first quarter of the ongoing fiscal year, given the low production numbers and slow sales, there are a few standout performers. Here’s looking closely at them, with the big news being Hyundai Motor India usurping the No. 1 UV market share position from Maruti Suzuki India.

Giving Hyundai new winds in its sails is the second-generation Creta, which went on sale just prior to the nationwide lockdown in end-March. Interestingly, with 3,212 despatches in the limited days of operation in May, the Creta topped the sales charts, marking the first time a Hyundai, as well as the first time an SUV, was the bestselling model in a month.

In mid-June, Hyundai announced that it had received over 30,000 bookings for the SUV, since it began accepting them on March 2. That’s some achievement considering the very challenging market conditions. Interestingly, at a time when there is a larger shift towards petrols in India, and rivals like the Renault Duster and Nissan Kicks have gone petrol-only, the diesel engine-powered variants are the most popular version of the second-gen Creta (with 55% of bookings). Hyundai has also said the new 1.4-litre turbo-petrol engine has been well received. The engines on offer with the new Creta include a 115hp, 1.5-litre petrol (with a manual and a CVT automatic gearbox), a 115hp, 1.5-litre diesel (with a manual and torque converter auto gearbox), and a 140hp, 1.4-litre turbo-petrol (with just a DCT automatic unit).

And, in a time of social distancing, Hyundai's digital 'Click To Buy' campaign seems to have clicked with consumers.

Kia Motors India: 8,936 units
UV market share: 13.41% (up from 8.97% in FY2020)
If there is a company that has firmly implanted its stamp on the Indian market in recent times, then it is Hyundai sibling Kia Motors. Right from its entry last August with the Seltos SUV and later with the Carnival MPV, Kia Motors India seems to have ticked all the right boxes.

Now, it looks to be taking that performance further. In Q1 FY2021, with sale of 8,936 units, the company’s UV market share has increased to 13.41 percent – a remarkable performance for an automaker which has yet to turn a year old in the competitive Indian market. And it is all set to reveal its third product – the snazzy Sonet compact SUV – on August 7.

Hyundai-Kia market share now 36%
Interestingly, put Hyundai and Kia's UV market shares together and what you get is a combined UV share of 36.7% for Q1 FY2021, nearly nine percentage points higher than the 27.66% the two Korean carmakers had in FY2020.

The Renault Triber was launched in August 2019 with a BS4-compliant petrol engine. Earlier in 2020, the compact 7-seater made the switch to a BS6-compliant version of the 1.0-litre naturally aspirated petrol engine. More recently, the line-up has expanded with the launch of the automatic version of the Triber, which is equipped with a 5-speed AMT gearbox.

UV biggies lose market share, Hyundai new UV market leader
With Hyundai and Kia making deep inroads into the domestic UV market, it is but natural that other players would feel the heat. Look at the market share table below and you see that hitherto UV market leader Maruti Suzuki India has lost 6 percentage points. In Q1 FY2021, its UV share has dropped to 19.70% from 26.31% a year ago and a market leading 24.87% in FY2020.

It’s quite an achievement for Hyundai which ended FY2020 with 18.69% market share, hot on the heels of Mahindra & Mahindra (18.96%). With a flurry of new SUV launches lined up in the coming months, this vehicle segment is going to see much action, be it consumer interest, sales or market share. Stay tuned. 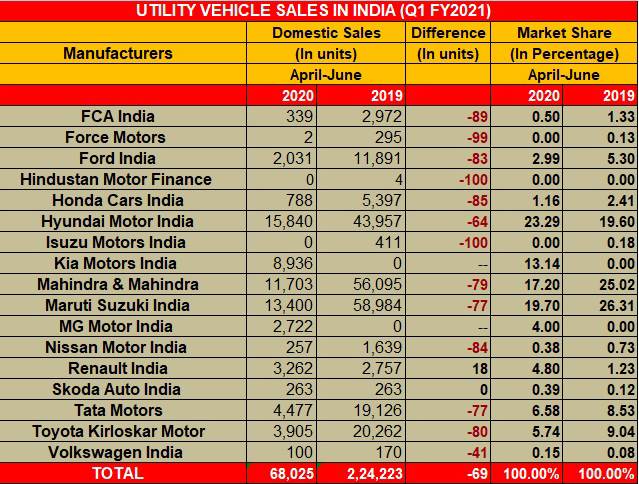