Growing demand for intra-city and last-mile transportation as also renewed buying from rural India has seen a smart uptick in sales of light commercial vehicles. 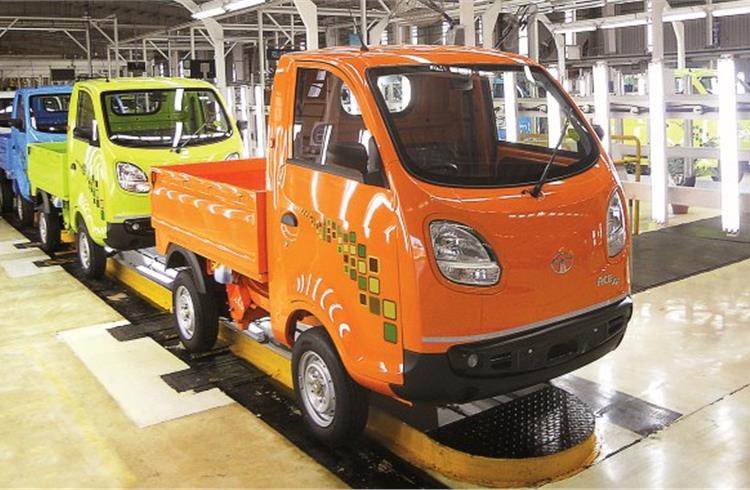 After single-digit growth for several months, LCVs have registered strong double-digit growth of 11 and 14 percent respectively in August and September 2016. Between April-September 2016 (H1, FY2016), the overall LCV segment has recorded healthy 11.69 percent growth with sales of 195,767 units (April-September 2015: 175,270). This is indeed a positive development for the overall commercial vehicle segment, helping buffer some headwinds in M&HCV sales.

Goods carriers the flavour of the season

In the overall LCV segment, the goods carriers segment is the largest in term of volume as compared to the passenger carrier segment. In this larger segment, Mahindra & Mahindra and Tata Motors have continued their strong performance by virtue of their varied product offerings. Ashok Leyland with its Dost small CV also posted growth in H1 FY'17.

In the 2-ton mini-truck segment, Tata Motors maintains its strong leadership. Thanks to the popular Ace range, the company is the largest player in the segment with a nearly 72% market share. During April-September 2016, the company sold 39,434 units, growing marginally by 3.5% YoY. M&M is the second largest player with a 24% market share, the growing demand for the Jeeto range of SCVs making its presence felt. The company sold 13,193 units in H1 FY2017 (+7.4%). This means Tata Motors and M&M together have a more than 96% market share in the 2T segment, hugely dominating the small trucks market.

Maruti Suzuki India, the country’s largest passenger car maker, has recently entered this fiercely competitive segment with its Carry small CV and thus far has sold 83 units. Although it is initially being sold in a few cities, it will be interesting to see how customers respond to the product.

In the 3.5-6T segment, Tata Motors is clear leader with its popular 407 range of trucks, during April-September 2016, with total sales of 7,775 units the company has cornered 68% market share in the category where not other manufacturers has serious competition to Tata Motors. M&M with its Load King truck and VECV with its small trucks range are present in the category with minimal market share and have to lot way to go before offering strong competition to the highest selling Tata 407 truck.

What’s amply clear is that in the overall LCV market, every manufacturer is uniquely positioned in a specific vehicle category where it is the market leader. The big fight though is between Tata Motors and M&M, which are both betting big on their existing and new products to expand their presence in the segment.

Thanks to the e-retailing boom across the country, the growing need for last-mile connectivity, a resurgence in rural demand and the popularity of the hub-and-spoke model, expect growth in the LCV sector to accelerate. 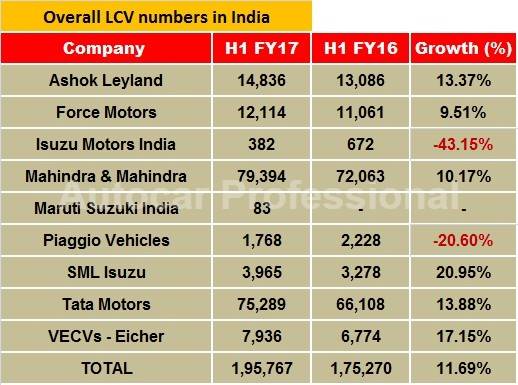 SIAM’s forecast for the LCV sector

LCV sales in the second half of the fiscal are expected to improve on the first half. Thanks to the e-retailing boom across the country, the growing need for last-mile connectivity, a resurgence in rural demand and the popularity of the hub-and-spoke model, expect growth in the LCV sector to accelerate.

According to industry body SIAM, LCV sales are expected to pick up due to improving rural consumption demand and expected ease of financing. Consumption demand is also expected to pick up, led by a recovery in urban and rural spending. The Seventh Pay Commission wage hikes, lower inflation and softer interest rates will further stimulate demand and as a result of good monsoon, strong agricultural freight demand during the kharif harvest season is expected. Further, a slight advancement of sales is expected in Q4 2016-17 due to all-India BS IV implementation from April 1, 2017 albeit this will be more pronounced for M&HCVs.

Importantly, as consumption expenditure picks up and availability of redistribution freight improves, NPAs would decline and the financing scenario is expected to gradually improve going forward. At present, LCV sales volumes are reflecting this situation. Monthly collection ratios of CV loans have started showing signs of improvement in the last couple of quarters and as loan collection improves, finance availability is expected to provide a boost to CV sales. Finally, interest rates have reduced on a YoY basis, which will further boost growth. All this means good news for LCV manufacturers in the country. Stay tuned for further updates.

You may like: Slowing M&HCV sales impact overall CV numbers in H1 FY2017