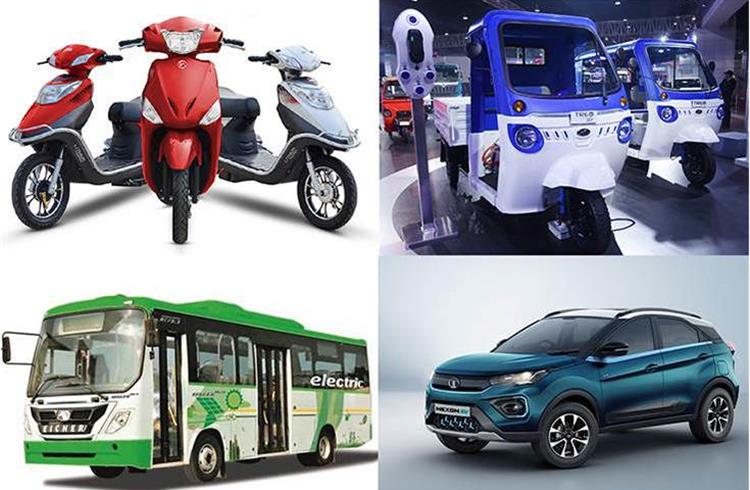 If the green shoots of retail recovery across segments are evi­­dent in the 27% year-on-year growth in the IC engine-powered automobile industry in the first quarter of FY2023, what’s also evident is the massive surge in demand for their truly eco-friendly and green siblings – electric vehicles (EVs).

These numbers, being retail sales, relay the real-world EV story as compared to the wholesale numbers released by vehicle manufacturers, which essentially constitute despatches to dealers across the country. 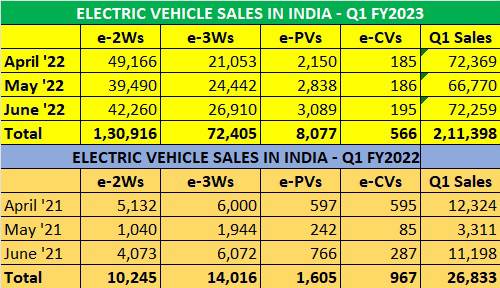 Growth seen across all 4 segments
The surge in sales can be attributed to an increase in the availability of products in the market, high petrol, diesel and CNG prices, state subsidies and sops offered under FAME II. It also helps that there is growing consumer awareness about the need to use eco-friendly transport. And, of course, the wallet-friendly nature of EV cost of ownership over the long run is a big catalyst.

In terms of volumes, driving the charge is the ‘low-hanging fruit’ of electric two- and three-wheelers. The first three months of FY2023 have seen retail sales of 130,916 e-two-wheelers, which translates into 1,454 such eco-friendly steeds being bought every day in Q1. These cumulative sales constitute a massive 1,177% YoY increase, albeit on a low year-ago total of 10,245 units in the pandemic-impacted Q1 FY2022. 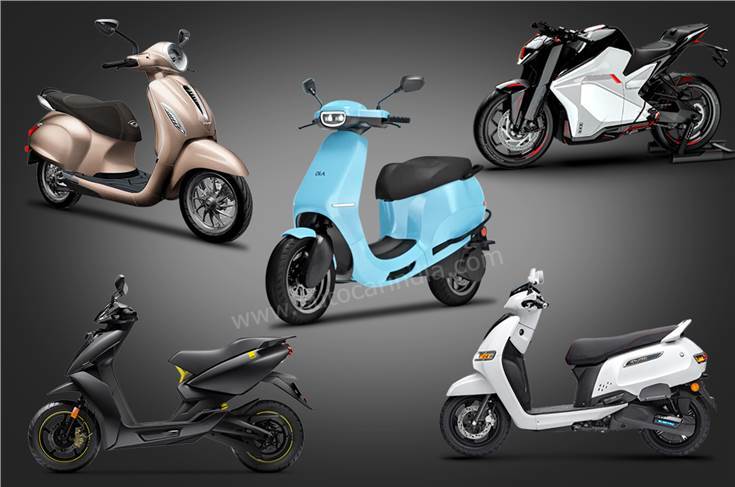 Electric two-wheelers zip past 130,000 sales in Q1
Of the 130,916 e-scooters sold from showrooms between April 1 and June 30, 2022, the top five players account for 99,552 units or 76% of the total sales. Ola Electric, which has the S1 model on offer, and Okinawa Autotech, which has seven e-scooters, are the chart-toppers for Q1 FY2023 and are separated by only 526 units. However, for both companies, the sales momentum seems to have slowed down from April through to June, possibly due to these firms being impacted by the e-scooter fires earlier this year. As is known, there was an incident of an Ola scooter catching fire in Pune around end-March this year. And mid-April saw Okinawa issue a voluntary recall of 3,215 Praise scooters to sort out a similar issue. Pure EV is another OEM which was impacted by the same issue.

The New Delhi-based Revolt Intellicorp, one of the very few electric motorcycle makers in India, has sold 5,247 units of the RV400, proving that demand for EVs on two wheels is not restricted to scooters only.

The biggies of the ICE world and recent entrants into the EV world – Bajaj Auto and TVS Motor Co – are at eighth and ninth positions respectively. While the Bajaj Chetak has gone home to 4,640 buyers, the TVS iQube has been the purchase decision of 3,804 buyers. Both these OEMs are fast upping the ante on their marketing and retail network front to ensure their electric offerings see much better traction. 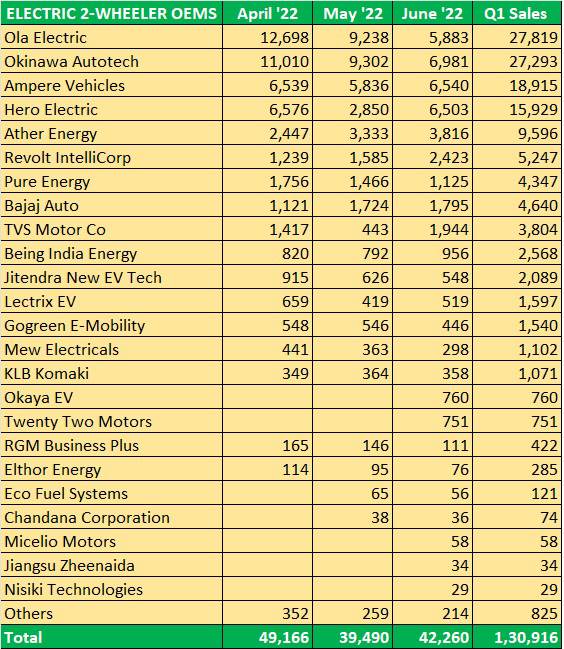 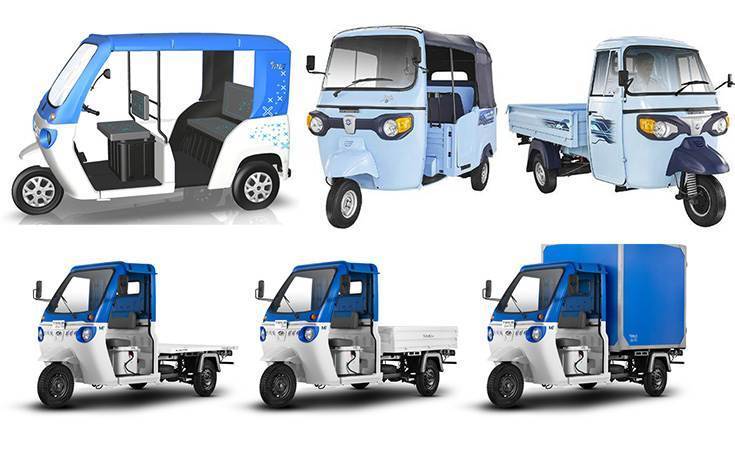 FADA-sourced data for Q1 FY2023 reveals that 72,405 e-three-wheelers were sold, with YC Electric Vehicle topping the chart with 6,315 units, followed by Saera Electric Auto with 3,973 units. But club two Mahindra entities and what you get is 6,009 units, which makes the first mover in electric mobility the leader in this segment.

With over 30 players and counting, this segment has a large number of operators, which is proof of the massive demand for this low-hanging fruit of the EV industry. 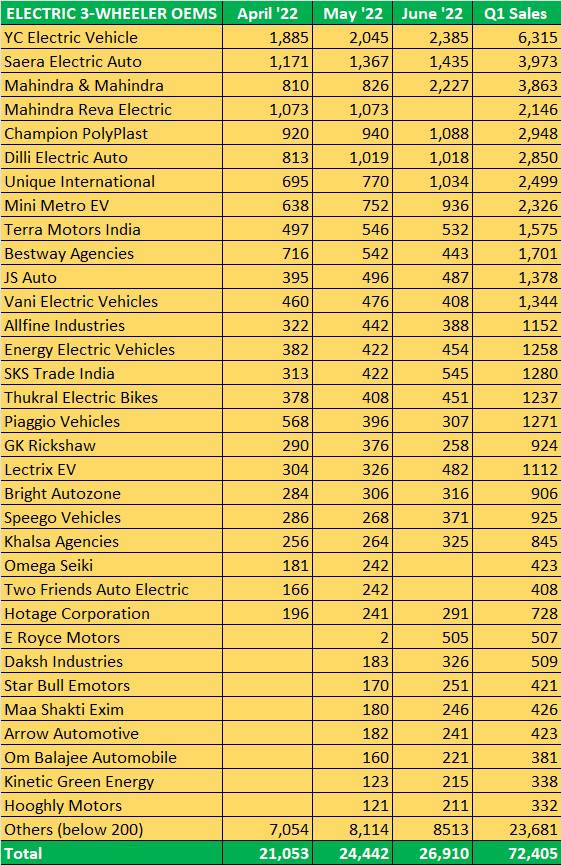 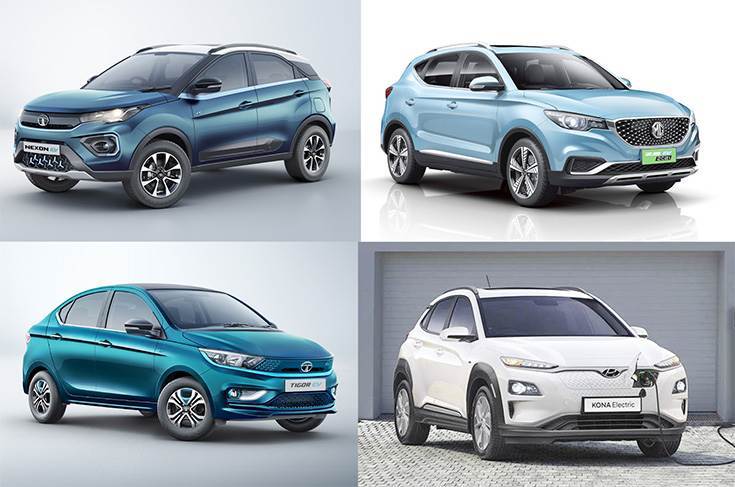 Tata Motors makes the con-Nexon with EV buyers
Compared to two- and three-wheelers, the electric passenger vehicle segment is seeing relatively lesser offtake but that can be put down to the much higher initial vehicle cost. Nevertheless, demand is on the upswing and the one benefiting from it the most is Tata Motors, which now has three EVs on sale – the market-leading Nexon EV, Tiago EV and Tigor EV.

In Q1 FY2023, Tata Motors saw month-on-month increase in demand and its retail sales were just two units shy of the 7,000-unit mark. Wholesales in the April-June 2022 period were 9,283 units, which means the company has kept its showrooms well stocked with its EV machines. Tata, which is gunning for overall PV sales 500,000 units this fiscal, is targeting EVs to have 10 percent of that – going to 50,000-unit sales from the 19,105 units sold in FY2022 translates into 161 percent growth. Its Q1 FY2023 performance holds a candle and more to that goal.

MG Motor India, with its premium ZS EV, sold 719 EVs in the first quarter. The company is seeing considerable demand for its sole EV on offer, simply because the skyrocketing fuel prices are pushing multi-car households to switch to at least one EV in their garage. Moreover, the ZS EV in its facelifted avatar introduced in March this year, offers 42km more range than before, taking the ICAT-certified number to 461km from its 50.3kWh lithium-ion battery pack, that too has grown 13 percent larger in size. With a smart uptick in the adoption of EVs in the market especially after Covid, the company is now focusing to tap volumes by entering the more affordable segment. Work is underway to bring a compact two-door EV, based on the Wuling Air EV, next year, in the Rs 10-15 lakh price range.

And Chinese firm BYD’s Indian arm has unseated Hyundai from No. 3 position. The company, which launched the e6 MPV recently, has sold a total of 109 units to the B2B segment.

Meanwhile, the luxury car players – Mercedes-Benz, BMW, Audi, Jaguar Land Rover – have between them retailed a little over 50 electric cars. Mainly brought as CBUs to India as a halo product, these cars essay the latest in EV technology the world has to offer. 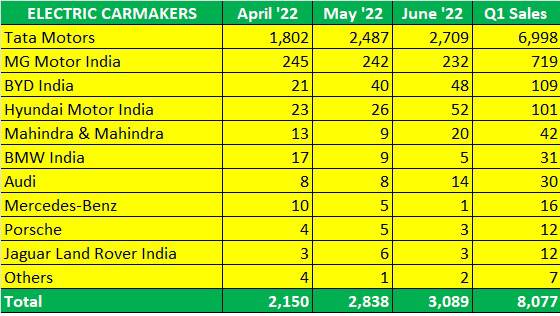 Air pollution continues to be a worrying issue, especially in recent times when climate change and global warming have caught the attention of policy makers as well as industry leaders worldwide, who now look at all possible sustainability solutions to go eco-friendly.

India, with a grim scenario of a predominantly coal-based power generation, mass-scale operation of unorganised industries adhering to negligible levels of environmental norms, agricultural and automotive emissions, and a stark rich-to-poor divide, is also grappling with the issue of severe air quality in many of its cities across the vast landscape, putting the lives and health of its over 1.3 billion population at stake.

As per the 2021 World Air Quality Report, released in March 2022 by IQAir, a Swiss group that measures air quality levels based on the concentration of Particulate Matter (PM) 2.5, New Delhi continues to be the world’s most polluted capital city for the fourth consecutive year.  In 2021, India was home to 11 of the 15 most polluted cities in Central and also in South Asia.

Now, many States in India are cognisant of the air pollution issue and are making moves to substantially increase the population of electric buses. Convergence Energy Services (CESL), a wholly-owned subsidiary of state-run Energy Efficiency Services, is aggressively pushing the case of e-mobility. Its  ‘Grand Challenge’, a set of homogenised demand for electric buses aggregated across nine cities in India, is to provide a big thrust to the adoption of green public mobility. The cities to be covered under the Grand Challenge are Mumbai, Delhi, Bangalore, Hyderabad, Ahmedabad, Chennai, Kolkata, Surat, and Pune. Such moves are benefitting e-bus manufacturers.

As per the data, in Q1 FY2023, electric bus maker Olectra Greentech, is at No. 1 position with sales of 143 units. The company rolls out its electric buses from a plant in Dharuhera, Haryana.

In second place is PMI Electro Mobility. Once a coachbuilder to OEMs across India, the company is today seeing strong demand for its e-buses, particularly from STUs. The company is now gearing up to begin a critical second growth phase with Beiqi Foton Motor of China which will see electric commercial vehicles roll out of a new plant at Chakan near Pune in early 2024.

JBM Auto with 101 units is the No. 3 player in Q1. JBM Auto’s all-electric EcoLife buses currently ply in Karnataka, Gujarat, Delhi-NCR, Maharashtra, and Andaman & Nicobar among others. Earlier this year, JBM Auto delivered the prototype of its EV bus for the Delhi Transport Corporation.

GROWTH OUTLOOK: PLUGGED FIRMLY INTO A GREENER FUTURE
Given the pace of growth in Q1, the EV industry can be expected to notch consistent, if not rapid, progress in the coming quarters of FY2023. What’s helping accelerate demand for two- and three-wheeled EVs is the massive demand from the B2B sector, which is also helped by the gradual shift of two-wheeler buyers to electric mobility.

Following recent incidents of some EVs catching fire – both two-wheelers and a four-wheeler – the government has taken a serious view of the issue. In April, at a brainstorming session, leading experts, comprising around 200 stakeholders from ministries, R&D labs, academia, and industry, discussed the R&D needs of EVs and deliberated on a road map for EV technologies. They discussed the need to focus on acquiring capability in the major EV subsystems like the battery, motor, and power electronics and ways to overcome various challenges. A month later, the Ministry of Road Transport and Highways (MoRTH) convened a virtual meeting with 35 EV manufacturers. More recently, media reports have it that the government is to set up a panel which will mandate standard operating procedures for testing and certification of EV batteries as well as stringent quality control.

Though at present, EVs account for less than one percent of the total automobile market in India, demand is growing year on year. Of the total 30,69,499 PVs sold in FY2022, 21,821 were EVs and accounting for 0.7% of the market, up from 0.2% in FY2021. The shift to e-mobility in e-two- and three-wheelers is far more rapid and can only improve in the coming years.

Some challenges remain in the form of inadequate charging infrastructure and high initial EV prices, which is directly related to the battery cost. With OEMs’ sharpened focus on localisation with a view to reduce costs and enhance affordability, and battery prices expected to reduce gradually, there is a belief that things can only get better for this form of eco-friendly mobility.

What also augurs well is that a number of states, including Delhi, Maharashtra, Andhra Pradesh, Bihar, Chandigarh, Haryana, Karnataka, Kerala, Madhya Pradesh, Odisha, Meghalaya Punjab, Tamil Nadu, Telangana, Uttar Pradesh and Uttarakhand have rolled out EV-friendly policies, which should help the industry grow at a faster pace. Watch this space for more updates on this exciting industry segment.