The sales slowdown in some sectors, over the past two years or so, had dampened demand which meant lesser production and in turn idle capacity, while the diesel ban in the Delhi-NCR market from December 2015 did not help matters either. 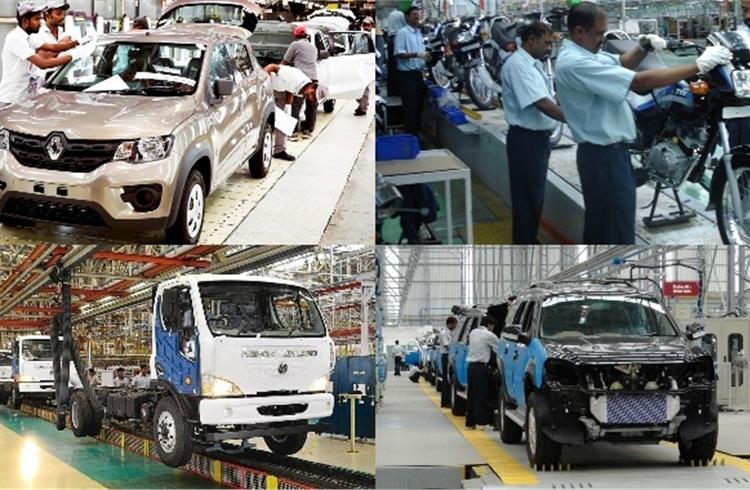 At 7.22% year-on-year growth in FY2015-16, the Indian automotive industry has emerged as one of the fastest growing major automotive markets in the world, ahead of China. It is also tipped to be the third-largest car manufacturer by the year 2020.

However, in terms of production in absolute numbers of passenger cars, India is still at a nascent stage compared to China. The fact of the matter is that there is considerable excess manufacturing capacity. Industry production data for FY2015-16 confirms that Indian automakers, particularly in the passenger vehicle and commercial vehicle segments, did not fully utilise their installed manufacturing capacities.

The sales slowdown in some sectors, over the past two years or so, had dampened demand which meant lesser production and in turn idle capacity. The diesel ban in the Delhi-NCR market from December 2015 did not help matters either and some OEMs like Toyota Kirloskar Motor were adversely impacted. However, a few companies went ahead and expanded their manufacturing capacity, hoping to be ready as and when market demand perks up. Some like Volkswagen India also saw their exports perk up, which helped act as a buffer to slowing domestic market sales.

According to industry forecasts, the Indian passenger vehicle market will see almost 9 million sales annually by FY2020, a three-fold increase from FY2015.

Collating data for installed production capacity and analysing it with the 2015-16 real-world production figures gives a good understanding of how the PV, CV and two-wheeler sectors have utilised their individual manufacturing capacities. For FY2015-16, the math adds up to 54.25%, leaving a considerable 45.75% of overall capacity unutilised.

The passenger vehicle industry, which has seen considerable investment in enhancing capacity in recent years, saw production capacity usage of just 56.49%, an increase of a mere 3.19% over the previous financial year.

Of the passenger vehicle manufacturers, Fiat Chrysler Automobiles India and Force Motors saw the lowest capacity utilisation figures at 4.39% and 4.53% respectively. Isuzu Motors India, which opened its all-new plant at Sri City recently, was assembling vehicles at the HM plant in Tamil Nadu.

With an annual production capacity of 75,000 units, Force Motors could only manage to produce 3,396 units from its passenger car portfolio in 2015-16.

However, there are a couple of success stories – Hyundai Motor India manufactured a total of 648,638 units out of a total capacity of 680,000 units, thus registering  handsome capacity utilisation of 95.39%. The country’s largest carmaker, Maruti Suzuki India also recorded an impressive 94.67% utilisation efficiency, producing 1,420,081 units out of a total production capacity of 1,500,000 units.

However SML Isuzu and Volvo India might seem to be showing massive production volumes but this could lead to excessive inventory overheads as demand plunges, leading to massive overhead costs.

Of all the vehicle categories, the two-wheeler sector is the champion and it has yet again proved to be a winner in this regard with a capacity utilisation of 72.12% in 2015-16 as against 70.81% in 2014-15. This is indicative that the two-wheeler demand and supply relationship is solid and poised to perform even better.

With the Met forecasting a regular monsoon this year and economic indices showing promise, FY2016-17 looks to be a better year for automakers who should be made to improved their level of manufacturing capacity utilisation.