The world automobile market is changing so rapidly that it just makes sense for manufacturers to collaborate rather than fight it out alone. 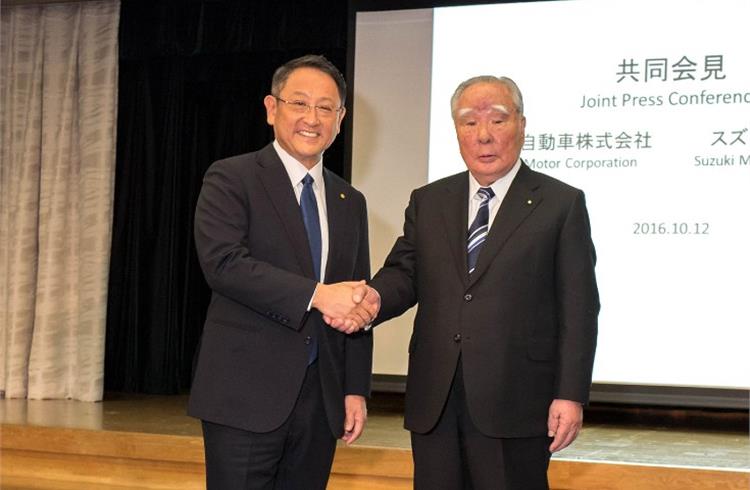 Toyota and Suzuki have taken their relationship to the next level with the announcement of a new SUV that will be manufactured at the former’s plant in Bidadi near Bengaluru. Over the last five years since they first made known their intent to come together, the Japanese duo has quietly been strengthening the scope of the alliance in India.

The initial phase saw product swaps in the form of the Suzuki Baleno-Toyota Glanza and Vitara Brezza-Urban Cruiser. Toyota and Suzuki will also explore new markets and focus on new technologies to keep pace with more stringent emission norms. The all-new SUV will now pave the way for more joint product development and this will truly change the contours of the partnership during the course of this decade.

Will this lead to Toyota eventually buying out Suzuki given that it is the larger of the two? This actually becomes an irrelevant point because the Japanese work very differently with mutual respect being the core of any partnership.

Sure, Toyota is the world’s largest carmaker while Suzuki is a lot smaller in contrast.  Yet, both know that they would benefit by jointly pooling their competencies instead of getting into one-upmanship mode. After all, Suzuki is the market leader by miles in India which continues to be a difficult market to crack for Toyota.

It would, however, be too simplistic to look at this alliance solely through an India lens. The world automobile market is changing so rapidly that it just makes sense for manufacturers to collaborate rather than fight it out alone.

The likes of Carlos Ghosn, the former CEO of Renault-Nissan who is now leading the life of a fugitive in Lebanon, and the late Sergio Marchionne who pulled off the Chrysler acquisition for Fiat, understood this perfectly. Ghosn became a demigod after the miraculous turnaround of Nissan over two decades earlier and was quick to include Mitsubishi in the three-way alliance with Renault. Likewise Marchionne was brought onboard to reduce Fiat and the Lehman crisis gave him a perfect opportunity to snap up Chrysler.

Ghosn was equally keen on bringing Fiat Chrysler Automobiles (FCA) into the Renault-Nissan-Mitsubishi fold but his arrest derailed this plan and Groupe PSA, under the dynamic leadership of Carlos Tavares, pulled this offer paving the way for Stellantis. Before his passing, Marchionne also tried hard to woo General Motors into a merger with FCA except that the latter was not interested.

Today, Akio Toyoda, President of Toyota Motor Corporation, is widely respected as one of the top brains in the global automobile arena who understands that the world of mobility is going through a tremendous change. The tie-up with Suzuki for emerging markets and leveraging the competencies of group company, Daihatsu, for the ASEAN region are all steps focused on consolidation.

Every automaker knows that big Chinese brands like Geely, SAIC and Great Wall Motors are as keen on going global and making a mark. It is, therefore, in their interests to protect their turf and the only way to do this is through alliances. This has become even more pronounced in the Ukraine war where Russia and China are now being seen as coming together with Europe and the US on the other end of the spectrum.

Back home, Mahindra & Mahindra has launched its new Scorpio-N which is an integral part of its turnaround exercise beginning with the Thar and XUV 700. Scorpio still remains one of its most powerful brands a good two decades after it was launched and literally catapulted M&M into a different league.

The brand continues to be a big draw even after so many years which puts it at par with the Honda City and Bajaj Pulsar in terms of sheer durability and top-of-mind recall. Project Scorpio was a make-or-break for M&M at that point in time and its success gave the company the confidence to spread its wings and look for a host of mobility solutions.

Today, it is back to staying focused as a robust SUV maker which is the most pragmatic option since it will now have to contend with stiff competition from local players such as Tata Motors as well as the Koreans and Japanese.

This issue has interesting views coming in from global leadership teams of Visteon and Elektrobit. It is more than apparent that these companies are upbeat about India and its growth prospects even while its annual car numbers are minuscule compared to China. Yet, there is faith in its long term prospects and this is what matters to everyone by the end of the day.