The company plans to invest Rs 10,000 crore in setting up of the factory and for localisation of batteries. 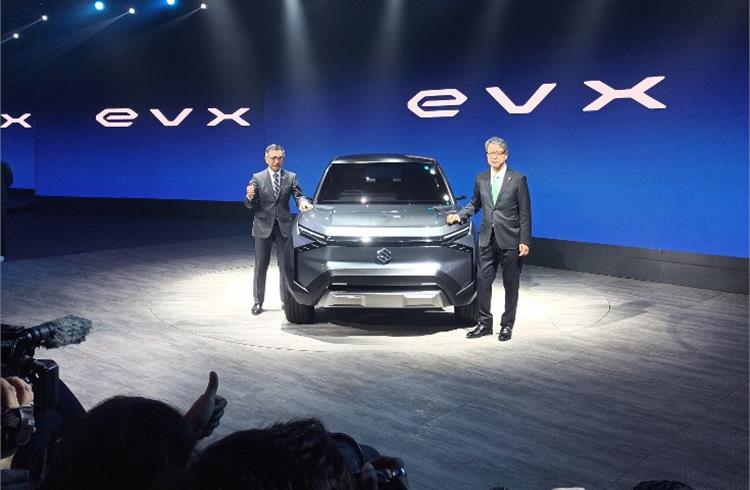 Toshihiro Suzuki, President, Suzuki Motor says the electric SUV based on the concept eVX – its first “global strategic EV” model will be introduced in the market in 2025.

Unveiling the new eVX, Suzuki said, the company is selling SUV models around the world, including the Jimny, S-CROSS, Brezza and the new Grand Vitara which was recently launched in India.

“The eVX is a BEV model that combines Suzuki’s strong 4x4 DNA with the advanced features of the latest BEVs. As part of this development, we have evolved our 4x4 technology to achieve a true Suzuki SUV driving experience. We’re confident that the eVX will be loved by customers in India and across the world,” he added.

The head of the Suzuki Group says for the Group addressing global warming is a priority, and the SMC Japan is promoting a range of global measures to reduce greenhouse gas emissions generated from its businesses.

“One key measure is reducing CO2 emitted by using our products. Here in India, as announced in March last year, we’ll invest 100 billion rupees in the production of BEVs and their batteries. We will be producing biogas in India, and developing other solutions, such as bioethanol and green hydrogen,” assured Suzuki.

Internally codenamed YY8, the new SUV EV is a global model that Suzuki Motor will share with its global alliance partner Toyota Motor. Apart from serving the Indian market, Suzuki has plans of exporting to numerous global markets from the country.

“Suzuki operates in more than 200 countries and regions around the world. We believe that the best way to create truly valuable vehicles is to optimise them for the way different people live and drive. We will continue providing valuable products to our customers here in India and around the world,” said Suzuki.