Top 10 safest cars in India as rated by Global NCAP

Automotive safety watchdog Global NCAP has conducted crash tests of 41 Indian cars under its #SaferCarsForIndia programme. Read on to know the 10 best performers. 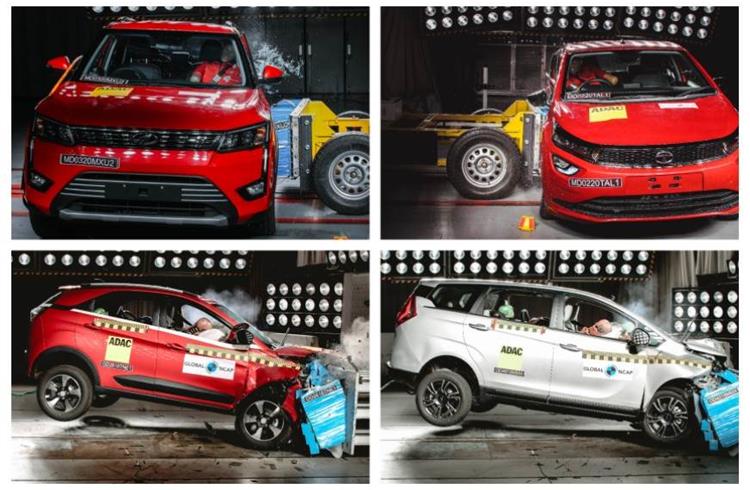 Global NCAP today released the results of its latest round of crash tests under its #SaferCarsForIndia programme. Here are the 10 best performers. 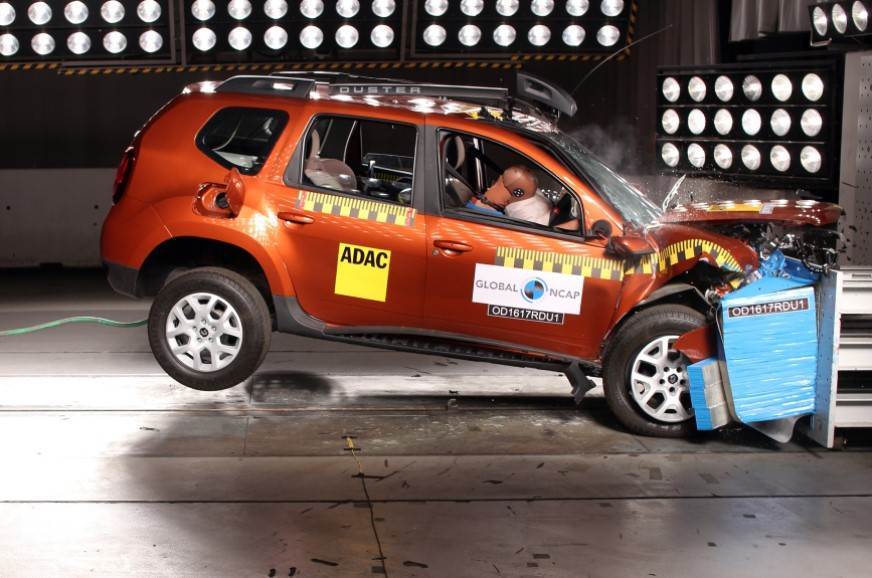 Considering the Renault Duster on sale right now has dual-front airbags, ABS with EBD and brake assist, rear parking sensors and more – and has since then been upgraded to meet pedestrian safety norms with a facelift – it could potentially score better than the model tested on Global NCAP’s crash tests. The Duster is now a petrol-only model priced between Rs 8.49-9.99 lakh (ex-showroom, Delhi). 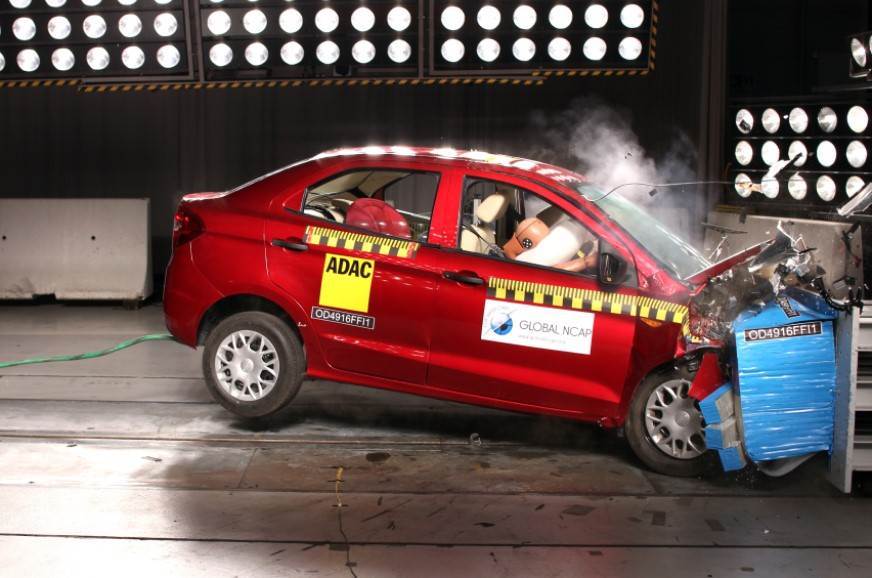 When it was tested in 2017, the Ford Figo-based compact sedan was given a respectable 3-star rating for adult occupancy (10.49/17), despite not having safety kit such as ABS and seat-belt pre-tensioners as standard. Faults like excessive movement of the three-year-old dummy’s child seat and lack of Isofix child-seat mounts meant that the Aspire received a 2-star child-occupancy rating (14.22/49).

The Ford Aspire facelift, which launched in late 2018, came with far more safety kit than the model that was tested; so, the Aspire’s overall score isn’t bad at all. The Maruti Dzire rival costs Rs 5.99-8.34 lakh (ex-showroom, Delhi) in its BS6 form. 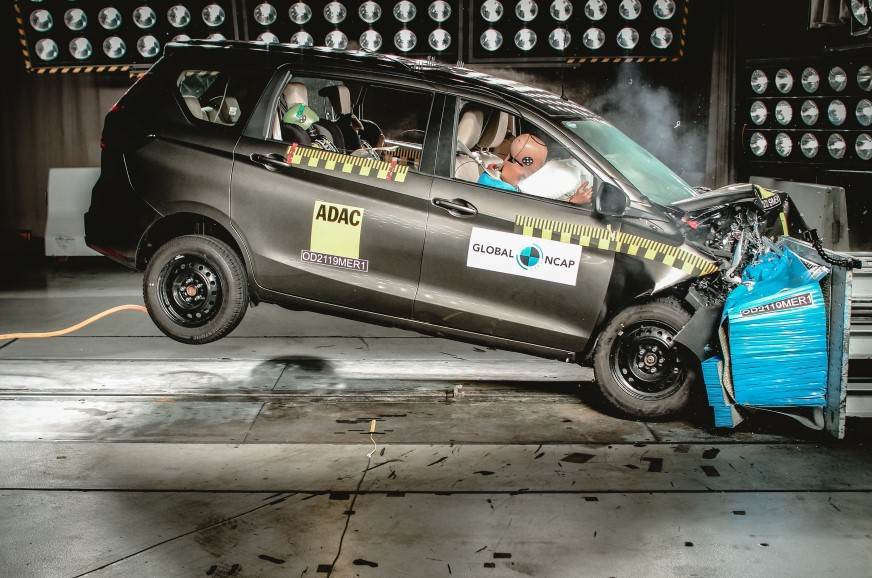 The current-gen Maruti Suzuki Ertiga was able to secure a 3-star rating for adult occupancy (9.25/17). Points were deducted as the body shell and footwell area were rated unstable and the passenger pre-tensioner failed to work properly during the test.

The Maruti Ertiga did manage to secure three stars (25.16/49) for child occupancy. Standard safety kit on the Ertiga includes two airbags, ABS, seat-belt reminders for the front seats, Isofix child-seat mounts at the rear and the now-mandatory rear parking sensors and speed alarms. The Ertiga is a petrol MPV that is priced from Rs 7.59-10.13 lakh, though there is a CNG variant on offer for Rs 8.95 lakh (ex-showroom, Delhi). 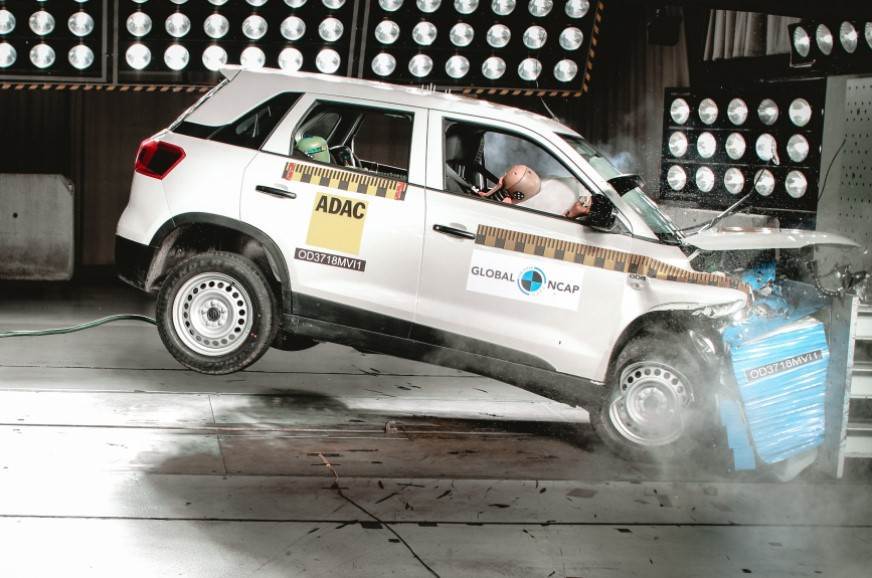 The Vitara Brezza’s 4-star rating for adult occupancy (12.51 out of 17) makes it the safest Maruti Suzuki model you can currently buy in India. However, the SUV only roped in two stars for child occupancy (17.93 out of 49) with the 18-month old dummy in the test suffering injuries to its head and shoulders. The markings for the Isofix anchorages did not meet Global NCAP testing protocols, either.

All variants of the Maruti Suzuki Vitara Brezza are equipped with two airbags, ABS with EBD, front seat belts with pretensioners, a driver’s side seat-belt reminder and Isofix child-seat mounts. The Hyundai Venue rival costs between Rs 7.34-11.15 lakh (ex-showroom, Delhi). 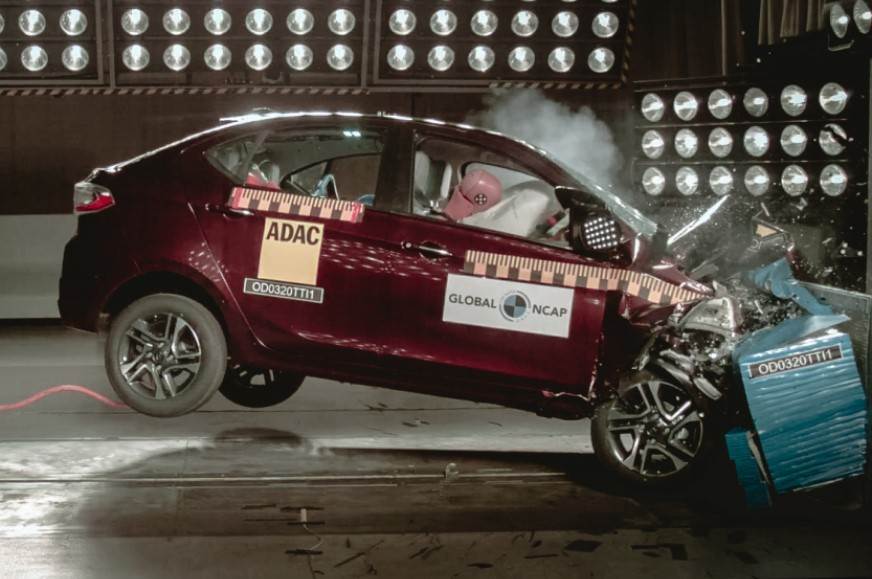 The Tata Tiago hatchback and Tigor compact sedan were both awarded four stars in the crash tests, managing to score 12.52 out of 17 for adult occupancy. The Tata Tigor and Tiago both also managed a 3-star child occupancy rating (34.15/49) – they were marked down for the lack of Isofix child-seat mounts. 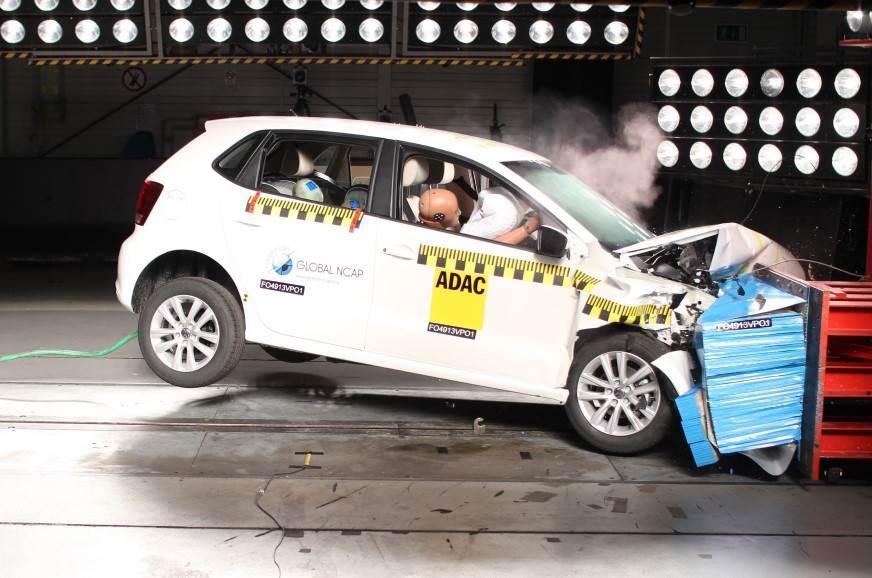 Despite lacking some safety kit available on today’s model such as ABS and seat-belt reminders, the VW Polo with two airbags managed a solid 4-star rating for adult-occupant protection (12.54/17) way back in 2014. It also scored three stars for child occupant protection (29.91/49) despite lacking Isofix child-seat mounts. The top-spec variants of the Volkswagen Polo now come with all the mandated safety kit, with prices ranging between Rs 5.83-9.60 lakh (ex-showroom, pan-India). 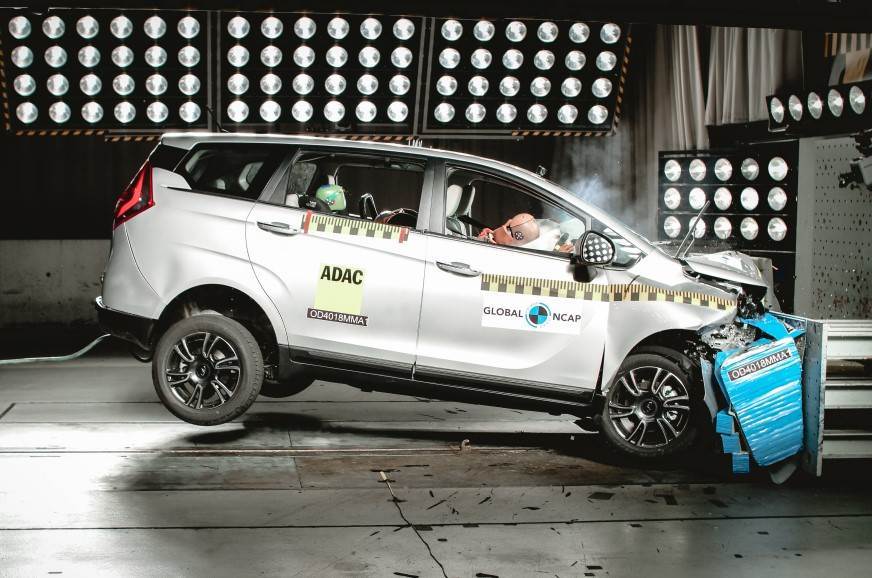 The first made-in-India MPV to gain a 4-star rating, the Mahindra Marazzo, performed better than people carriers such as the Maruti Suzuki Ertiga and the now-discontinued Renault Lodgy and Chevrolet Enjoy. The Marazzo MPV scored 12.85 out of 17 in adult safety and 22.22 out of 49 in child occupancy (two stars) thanks to safety kit such as dual front airbags, ABS, a driver’s side seat-belt reminder, front seat-belt pretensioners and Isofix anchorages for the rear seats – standard across all variants.

This score also means it is the safest MPV on sale in India. In BS4 form, Mahindra’s MPV was priced between Rs 9.99-14.68 lakh (ex-showroom, pan-India), which means Marazzo prices are bound to increase in the coming days. 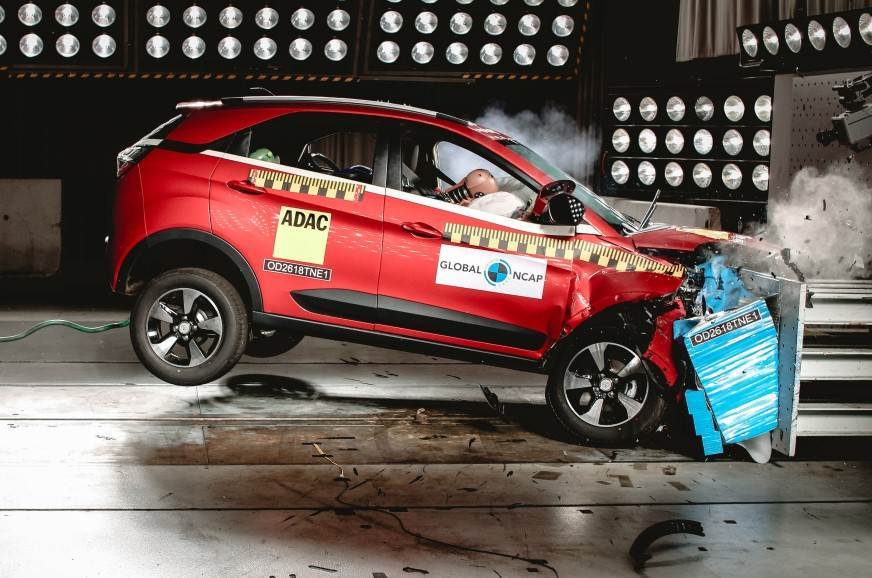 While the Nexon secured four stars (13.56/17) the first time it was crash tested, Tata upgraded all variants of the compact SUV with a seat-belt reminder for the driver and front passenger (which has since become mandatory) and sent it in for Round 2. This time around, the Nexon also managed to pass the UN95 side-impact protection requirements and became India’s first 5-star car, securing 16.06 out of 17 for adult occupancy. The Nexon’s child-occupancy rating is three stars (25/49). All variants of the Tata Nexon come with two airbags, ABS and Isofix child-seat mounts as standard.

Do note that the model tested was the pre-facelift car and it has since been upgraded to meet pedestrian protection norms that will come into effect later, this year. Currently, the extensive Tata Nexon range is priced from Rs 6.95 lakh, with prices going up to Rs 12.50 lakh for the top-spec diesel-automatic model. 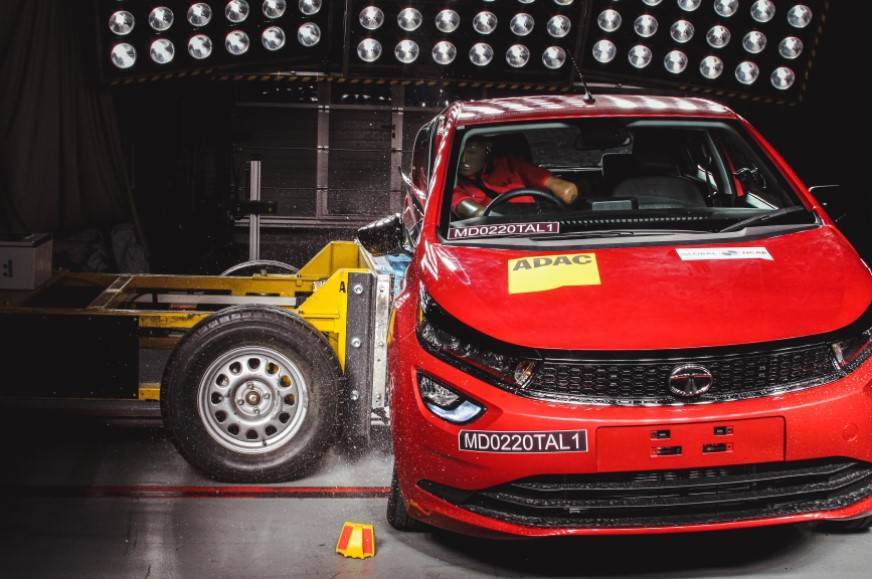 Tata Motors' second model to get a 5-star rating for adult occupant protection (16.13/17), the Altroz didn’t score as well on child occupant protection, securing three stars (29/49) as the backrest of the rear seat unlatched in the test and the three-year-old dummy’s head made contact with the interior. 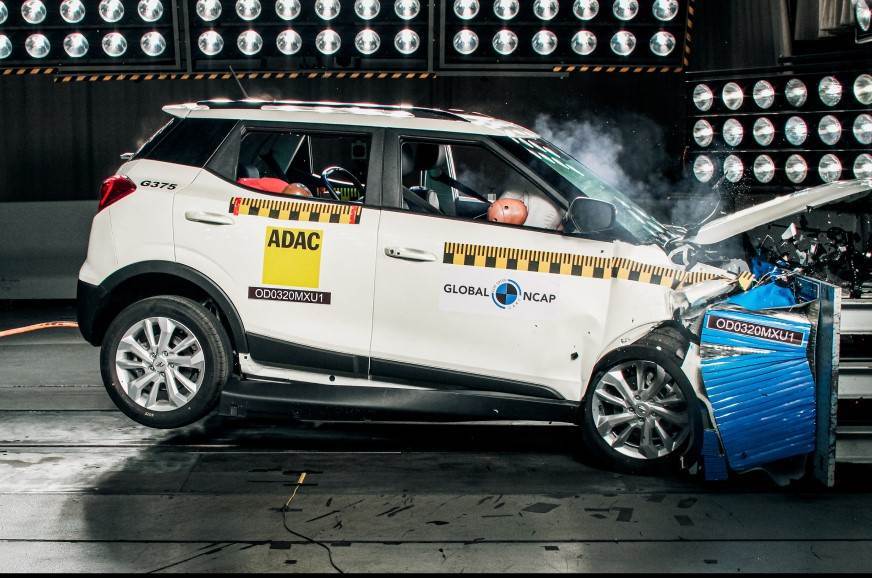 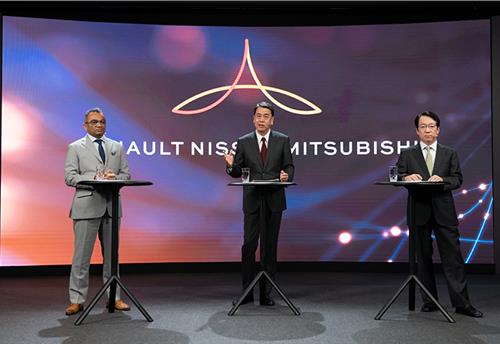 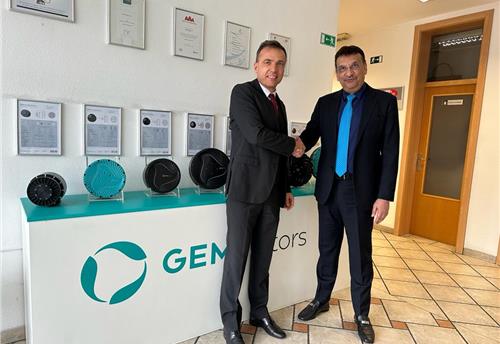 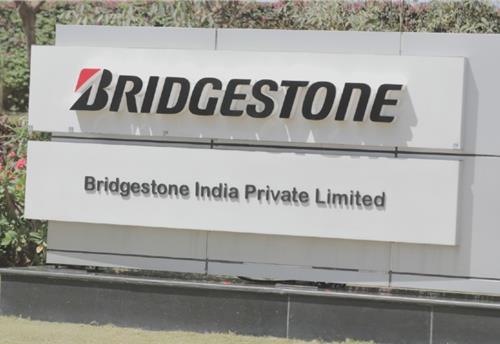