PV OEMs to line up Rs 650 bn CAPEX over the next two years: ICRA

Amidst the uncertainty caused by the pandemic and the semiconductor crisis, the OEMs continued to invest in capacity augmentation, aided by their strong financial risk profiles, the report noted. 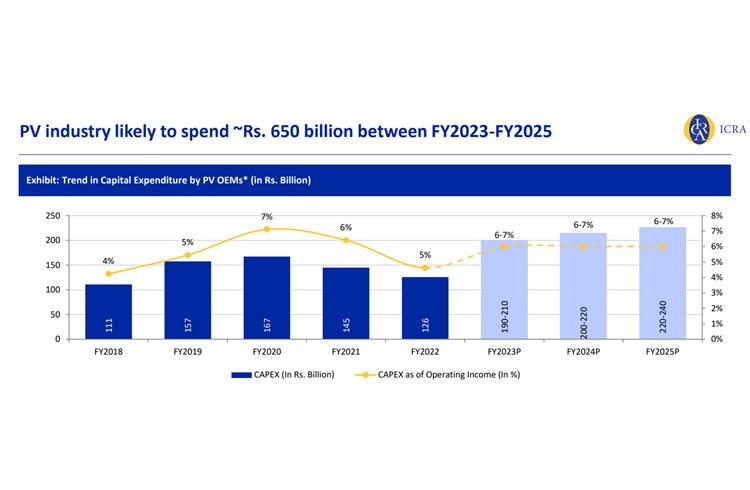 Buoyed by strong underlying demand and an easing up of semiconductor shortages, the demand for passenger vehicles has remained healthy since the turn of the calendar year. The PV industry wholesale volumes are expected to touch an all-time high of about 3.7-3.8 million units in FY2023, up 21-24% over the previous fiscal), aided by robust demand, rating agency ICRA said in a new report.

According to the agency, OEMs are budgeting for a substantial outlay towards new product development, including the development of capabilities or dedicated platforms for electric vehicles, the aggregate CAPEX outlay for the OEMs is estimated to remain heightened at Rs. 650 billion over FY2023-FY2025. A majority of the capex outlay (including new product developments) will be met through healthy cash accruals/parent funding support, apart from inorganic fundraise in some of the recently formed EV subsidiaries, it added.

Amidst the uncertainty caused by the pandemic and the semiconductor crisis, the OEMs continued to invest in capacity augmentation, aided by their strong financial risk profiles, the report noted.

"Multiple OEMs have already announced an aggregate outlay in excess of Rs. 250 billion towards capacity expansion for the next few fiscal years. Besides CAPEX by the OEMs, auto component manufacturers are also expected to scale up their investments to support their customers. While adding new capacities will marginally moderate the capacity utilisation levels over the next few years, given the healthy demand environment, the utilisation is likely to remain at comfortable levels (i.e., around 70%)," Rohan Kanwar Gupta, Vice President & Sector Head - Corporate Ratings, ICRA, said.

During the past two fiscal years, the capacity utilisation levels of the industry had been significantly impacted (most pronounced in Q1 and Q2 FY2022) as a result of the pandemic-induced disruptions and semiconductor shortage.

Moreover, ICRA pointed out that the capacity addition over the past two years has been around 3.5-4 million vehicles, majorly driven by commencement of a third line at Suzuki Motor Gujarat and commencement of assembly operations of Citroen India (in collaboration with CK Birla Group’s production facility in Tamil Nadu). Prior to that, Kia India and MG Motors had commenced operations in FY2020.

ICRA also noted that while the CAPEX outlay is likely to increase significantly, a majority of it will be met through healthy cash accruals and parent funding support, apart from inorganic fundraising in some of the recently formed EV subsidiaries. Thus, an increase in leverage is unlikely for most OEMs, and the credit profiles are expected to remain healthy, ICRA added.