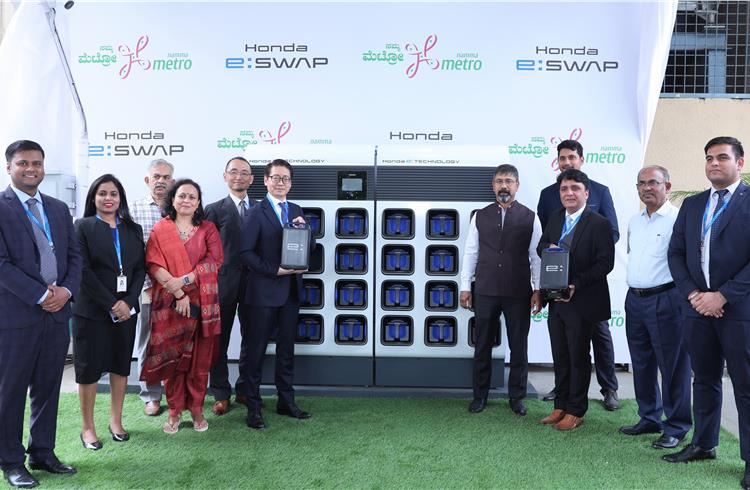 After Hindustan Petroleum Corporation (HPCL) and Honda Power Pack Energy India (HEID) entered into an arrangement to start 70 swapping stations in Bangalore, the company has now announced a tie-up with Bengaluru Metro Rail Corporation, BMRCL, to introduce Honda e-swap services at five Metro stations as part of a larger strategy to fast track this roll out by July 2023.

Honda will also leverage its swapping network as last-mile connectivity for its to-be-launched Benly swappable electric scooters for Gig workers. These will run on the Honda Mobile Power Pack for the future rollout of its entry-level EVs which are also being targeted during the first half of FY23.

The Japanese major which has been testing its swapping prowess since November 21 had initially targeted swap services for electric auto rickshaws and now it would be made scalable for e-scooters, company officials have indicated.

Honda Chairman and Managing Director Kiyoshi Kito said that HEID would primarily focus on three actions. These include expanding its battery swap network in Bengaluru, ensuring the reliable service with a highly integrated system monitoring every unique battery and exchanger and supporting vehicle manufacturers who are developing EVs that are utilising our network.

Managing Director, BMRCL, Anjum Parwez who was present at the rollout said that in line with Karnataka Electric Vehicle and Storage Policy 2017 the swapping stations will “not only facilitate metro commuters to adopt to e mobility as their first and last mile connectivity but also facilitate other e mobility vehicle users to become partners for a Greener Bangalore.”

When fully operational, the battery swapping stations will help reduce relief to Namma Bengaluru two-wheeler and three-wheeler customers’ initial cost to purchase EVs as well as reduce concerns about range anxiety and running out of batteries.